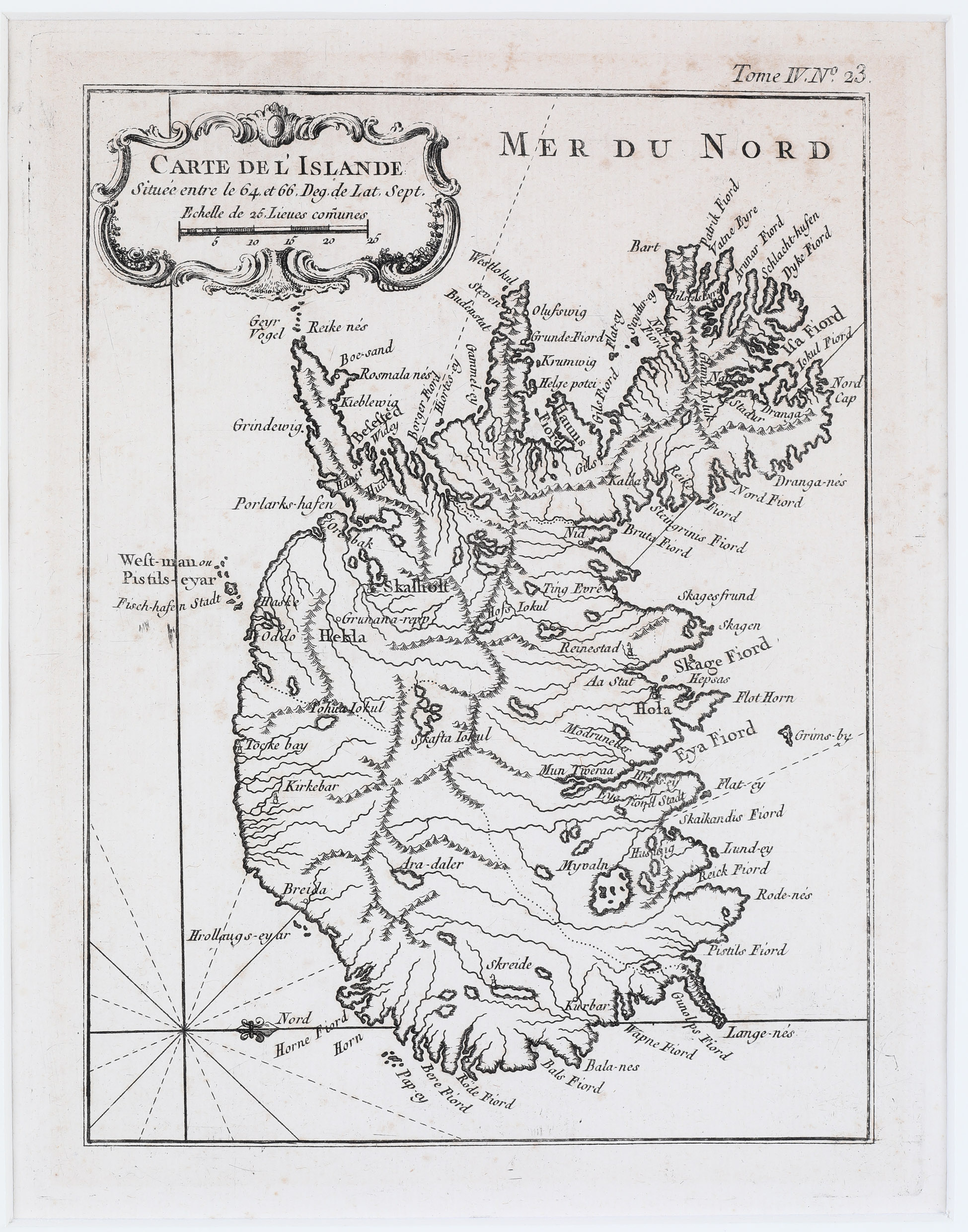 Niels Horrebow, born in Copenhagen, was a Danish high court judge who was sent to Iceland by the Danish King in 1749 to conduct a general economic and geographical survey. He lived in Iceland two years, studying animals, plants, weather, geological features and culture of Icelandic people. Horrebow‘s resulting work was published in Danish („Tilforladelige Efterretninger“) in 1752, German („Zuverlässige Nachrichten von Island“) in 1753, English („The Natural History of Iceland“) in 1758 and French („L‘ Histoire naturelle de l‘ Islande“) in 1764.

Jacques-Nicolas Bellin was a French hydrographer, geographer and member of the intellectual group „Philosophes“. Born in Paris, at the age of 18 years, he was appointed hydrographer to the French Navy. In 1741 Bellin became the first „Ingenieur de la Marine“ of the „Depot des Cartes et Plants de la Marine“ (French Hydrographical Office) and was named  „Hydrographe Officiel du Roy de France“. During his reign the Depot published a prodigious number of maps and atlases, e.g. the „Atlas Maritime“ (1764) and the „Petit Atlas Maritime“ (1764). Bellin also contributed a number of maps to the „Histoire Generale des Voyages“ of Antoine Francois Prevost d‘Exiles (1697 – 1763), a French author and novelist (e.g. „Manon Lescaut“), simply known as „l‘Abbe Prevost“. Prevost‘s collection was printed for the first time in 1746 and it continued until 1789, more than 20 years after his death. Many of Bellin‘s maps were copied by other mapmakers.

Most likely this rare map was printed for Bellin‘s “Petit Atlas Maritime“. The shape of the country is very similar to the map of Horrebow/Bellin „Carte de l‘Islande“ of 1764 but now Iceland stands vertical, west is up. The map is decorated with a title cartouche including an integrated distance scale and a compass rose. Mountains, rivers, lakes, forests, fjords and glaciers are delineated graphically.

Between this map and the north-oriented map there are differences in the notation of place-names: „Holum“ is replaced by „Hola“, „Skalhol“ by „Skalholt“, „Jokul“ by „Iokul“ and „Hecla“ by „Hekla“. The name of the volcano is written in larger letters and the same applies for the bishoprics whose church symbols are now smaller.

We acquired this map in the early stage of collecting maps of Iceland. In 2020 I saw another copy in a catalogue and I ordered it because I had completely forgotten that we already owned a copy. This is a mistake which happens to collectors sometimes. Now the „Schulte Collection“ contains two copies of this rare map. The quality of this one is much better than the one I bought decades later.