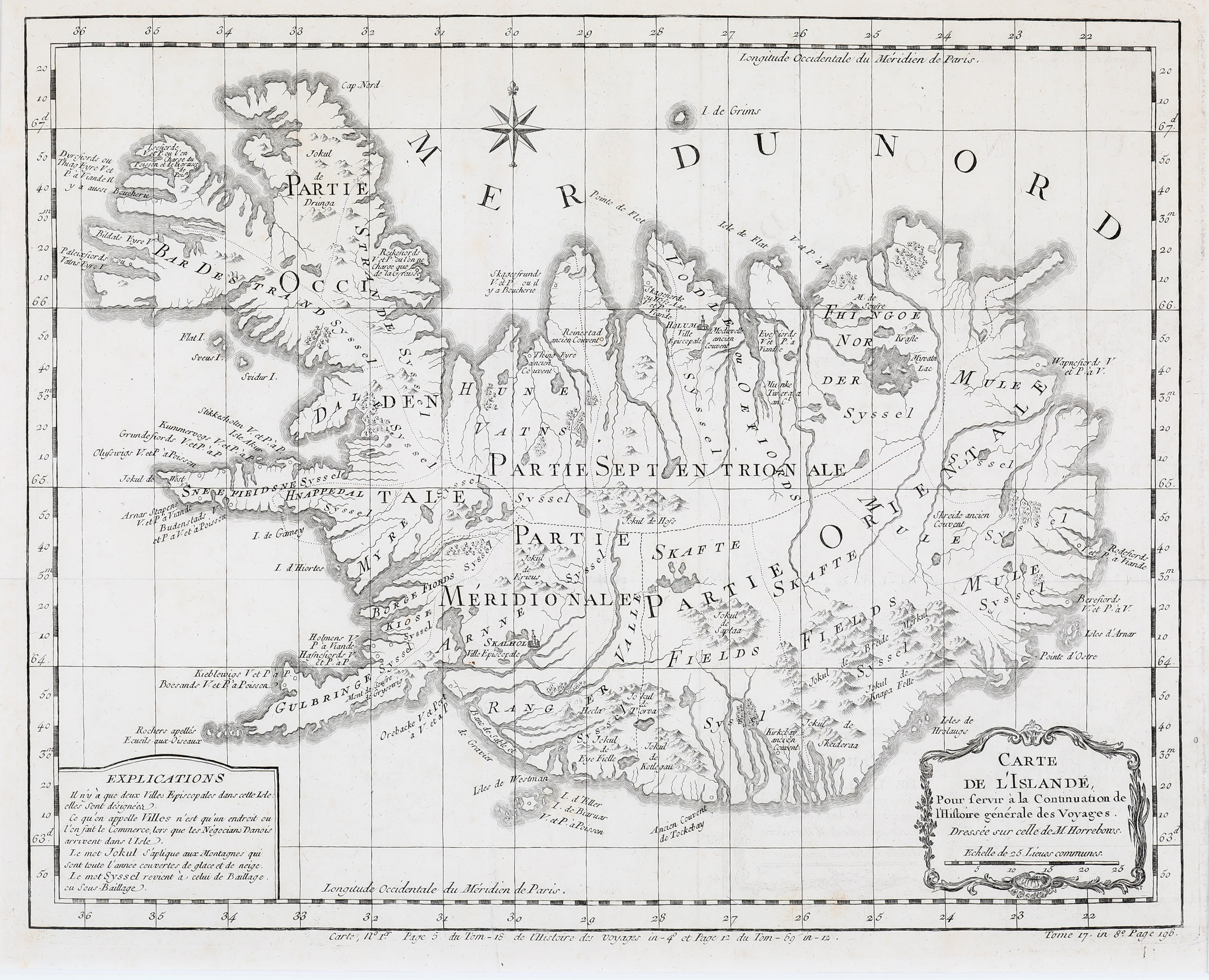 Niels Horrebow, born in Copenhagen, was a Danish high court judge who was sent to Iceland by the Danish King in 1749 to conduct a general economic and geographical survey. He lived in Iceland two years, studying animals, plants, weather, geological features and culture of Icelandic people. Horrebow‘s resulting work was published in Danish („Tilforladelige Efterretninger om Island“) in 1752, German („Zuverlaessige Nachrichten von Island“) in 1753, English („The Natural History of Iceland“) in 1758  and French („L’ Histoire naturelle de l’ Islande“) in 1764.

Jacques-Nicolas Bellin, was a French hydrographer, geographer and member of the intellectual group „Philosophes“. Born in Paris, at the age of 18 years, he was appointed hydrographer to the French Navy. In 1741 Bellin became the first „Ingenieur de la Marine“ of the „Depot des Cartes et Plants de la Marine“ (French Hydrographical Office) and was named  „Hydrographe Officiel du Roy de France“. During his reign the Depot published a prodigious number of maps and atlases, e.g. the „Atlas Maritime“ (1764) and the „Petit Atlas Maritime“ (1764). Bellin also contributed a number of maps to the „Histoire Generale des Voyages“ of Antoine Francois Prevost d‘Exiles (1697 – 1763), a French author and novelist (e.g. „Manon Lescaut“), simply known as „l‘Abbe Prevost“. Prevost’s collection was printed for the first time in 1746 and it continued until 1789, more than 20 years after his death. Many of Bellin‘s maps were copied by other mapmakers.

The background of this map is described on islandskort.is as follows:
„In the year 1730 the Norwegian Army Surveyor Thomas Hans Henrik Knoff was sent to Iceland by the Danish Government to continue and complete the work of Magnus Arnason who had been instructed to survey the whole of the country but died before the work was finished. The purpose was to make a precise map of the country for once and for all.“ Knoff corrected Arnason‘s work to some extent and made seven maps of specific districts and an overall map of Iceland which he finished in 1734. „When the maps were brought to Copenhagen an amazing dispute began over them. Knoff had sent a copy of some of them to his superior in Norway. Some regarded this as quite outrageous if not actually treasonable. The Danish king put an end to the dispute by deciding that the maps should not be displayed or made use of. Their fate was thereby decided, and they were put away under lock and key in some government department, where they lay unpublished and forgotten by nearly everyone for many years.“

The resurrection of the Knoff map happened in 1752 when Niels Horrebow published his book about Iceland (see above). The book was intended to correct errors in past natural histories of Iceland, particularly the work of Hamburg Mayor Johann Anderson who hat written about the island („Nachrichten von Island, Grönland und die Straße Davis“) in 1745, without ever actually visiting it, including comments on „Snakes in Iceland“ which led Horrebow to the sentence: „No snakes of any kind are to be met with throughout the whole island“.

Horrebow’s book included the „Land-Kort over Island“, engraved by Jacques-Nicolas Bellin. The publication of this map marked a turning point in the cartography of Iceland and „was the most important stage in the history of the cartography of Iceland since the appearance of bishop Gudbrandur‘s map more than 150 years earlier. For the first time was given a chance to see a map of Iceland which to some extent was based on triangluation and proper surveys of the country“ (islandskort.is). This map became the standard of mapping Iceland until about the end of the 18th century („Knoff maps“). In the translations of Horrebow‘s book there are different versions of the map of Iceland titled: „Land-Karte von Island“, „The Map of Iceland“ and „Carte de L‘Islande“.

This map is decorated with a large title cartouche including a distance scale in the lower right corner, a compass rose in the upper part and an explanation table in the lower left corner. The latter explains the meanings of some terms. „Ville Episcopale“ is used for the bishoprics Skalholt („Skalhol“) and Holar („Holum“). The term „Ville“ simply identifies a location where commerce occurs when the Danish negotiators arrive on the island. „Jokul“ is a mountain which is covered by ice and snow all year round and „syssel“ an ancient land-division. The map delineates graphically mountains, rivers, forests, fjords and glaciers. Astonishingly the famous volcano („Hecla“) is depicted insignificantly.

Later a very similar map was published by Krevelt in 1778. That map has a larger size, a new type set of „Mer du Nord“ and a slightly changed title cartouche.

As the German version of Horrebow‘s book dated 1753 is in my private book collection. I was able to compare the map „Land-Karte von Island“ with this one from the later French version. In „Carte de l‘Islande“, German words e.g. „Bischofsitz“ (diocesan village) are replaced by French, „Explications“ are introduced and replace a large compass rose. For the spelling of the Icelandic word „glacier“ a uniform term is used („Jokul“) instead of three different terms („Iokel“, „Iokul“ and „Iökul“) in the German version.