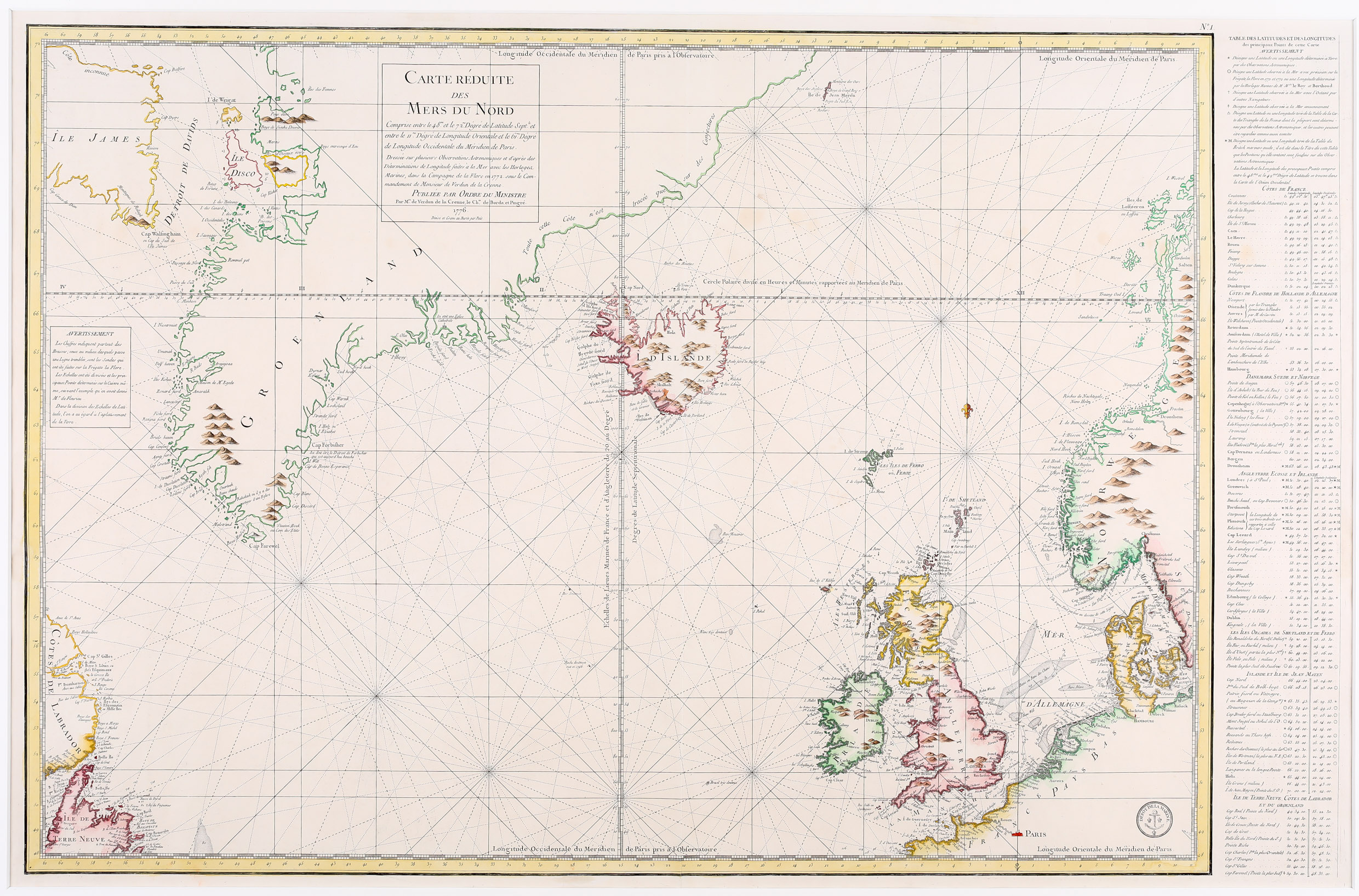 was a French hydrographer, geographer and member of the intellectual group „Philosophes“. Born in Paris, at the age of 18 years, he was appointed hydrographer to the French Navy. In 1741 Bellin became the first „Ingenieur de la Marine“ of the „Depot des Cartes et Plants de la Marine“ (French Hydrographical Office) and was named  „Hydrographe Officiel du Roy de France“. During his reign the Depot published a prodigious number of maps and atlases, e.g. the „Atlas Maritime“ (1764) and the „Petit Atlas Maritime“ (1764). Bellin also contributed a number of maps to the „Histoire Generale des Voyages“ of Antoine Francois Prevost d‘ Exiles (1697 – 1763), a French author and novelist (e.g. „Manon Lescaut“), simply known as „l‘Abbe Prevost“. Prevost‘s collection was printed for the first time in 1746 and it continued until 1789, more than 20 years after his death. Many of Bellin‘s maps were copied by other mapmakers.

This finely engraved and detailed sea-chart of the North Atlantic and the North Sea extends from the coasts of Newfoundland („Terra Nova“), Labrador („Nova Francia“) and Baffin Island („Isle James“) in the west to the coastline of Norway and Sweden, including most of Greenland, Iceland, Great Britain, Denmark, parts of France and Germany. The title cartouche is to be found within a frame in Greenland, mentioning also Verdun de la Crenne‘s voyage, the year 1776 and underneath the name of Petit, the engraver. On the left in the center of the map there is a legend concerning the wind and a table in the right-hand side margin lists the major locations with their longitude and latitude. In the chart a very precise technique was used by which only those coastlines definitely known are fully shaded, those inaccessible due to ice or unchartered are sketchily defined. The map is decorated with compass roses, rhumb lines, three fine galleons and a fleur-de-lis. The trademark of the Depot de la Marine is tobe seen in the bottom right corner.

Iceland itself looks strange, as if east and west pressed together, with the north gone up and the south down, the country having lost about half of its area. In the interior „I. D’Islande“ is printed. Some mountains including a spouting volcano in the south (not named but surely Hekla) are depicted and there are only two place-names, the bishoprics Skalholt and Holar. Astonishingly the Arctic Circle is nearly drawn correctly.

The map of Verdun de la Crenne of 1776 with the same title looks identical but its size is smaller.