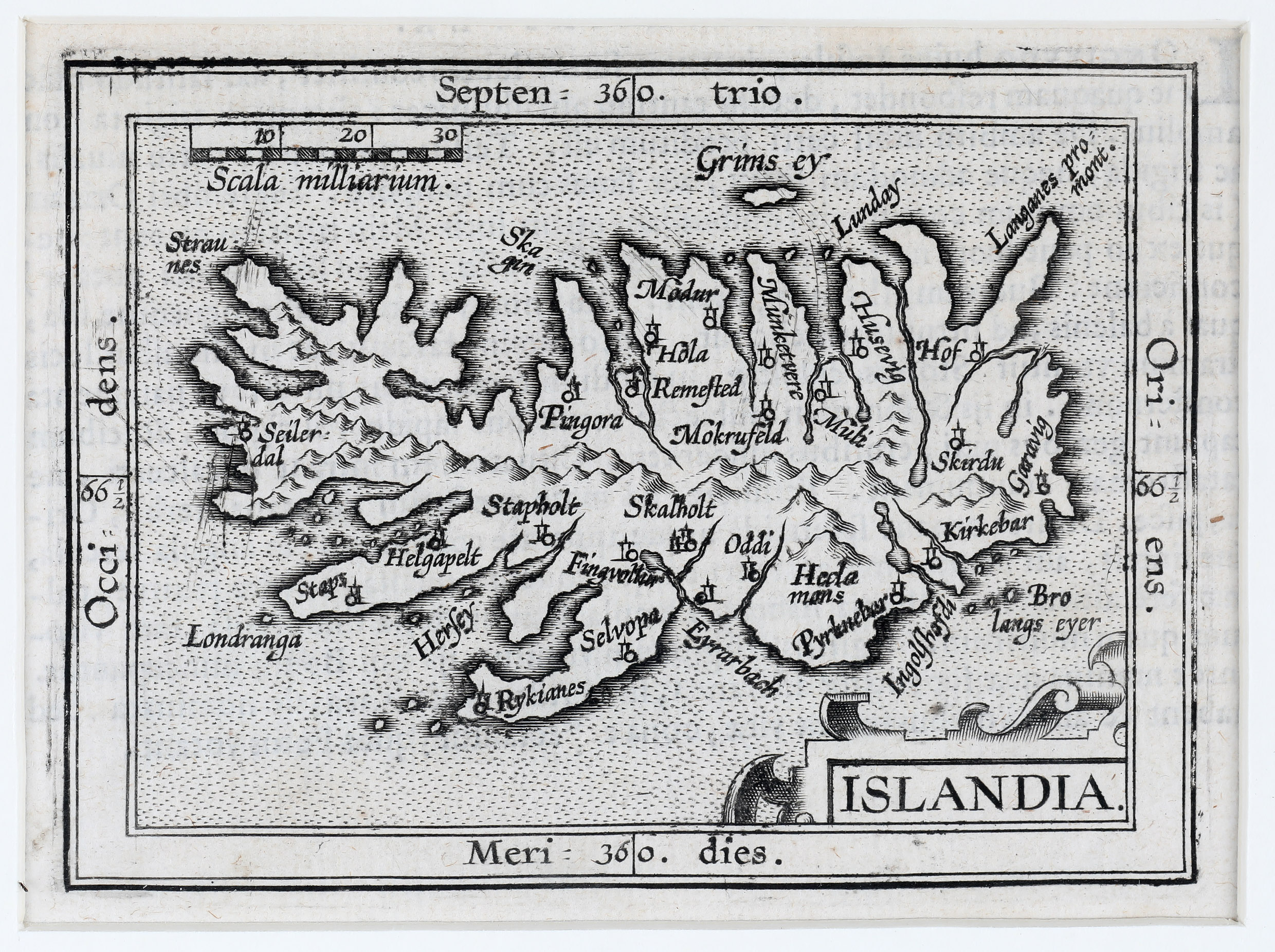 Abraham Ortelius was a Flemish/Dutch mapmaker and is perhaps the best known and most frequently collected of all sixteenth-century mapmakers. He was born in Antwerp which was then in the Habsburg Netherlands (now Belgium). The „Ortellius“family was originally from Augsburg/Germany, a Free Imperial City of the Holy Roman Empire. Abraham started his career as a map engraver. In 1547 he entered the Antwerp Guild of Saint Luke as „afsetter van Karten“ (illuminator of maps) and then  became a business man dealing with books, prints and maps. He travelled a lot and at the Frankfurt book and print fair he met Gerardus Mercator in 1554. Due to his influence Ortelius seems to have been attracted towards the career of a scientific geographer. In 1564 Ortelius published his first map „Typus Orbis Terrarum“, an eight-leaved wall map of the world and in 1570 the Atlas „Theatrum Orbis Terrarum“ (Theater of the World) with 53 maps. „The publication of this atlas marked an epoch in the history of cartography. It was the first uniformly sized, systematic collection of maps of the countries of the world based on contemporary knowledge and in that sense may be called the first modern atlas“ (Tooley, Maps and Mapmakers).

By the time of his death in 1598, a total of 25 editions were published including editions in Latin, Italian, German, French and Dutch; later editions were issued in Spanish and English by Ortelius‘ successors Galle and Vrients. Over the decades the atlas has tripled in size. The final edition was published in 1612.

In 1573, Ortelius started publishing supplementary maps under the title „Additamentum Theatri Orbis Terrarum“. In 1575 Ortelius was appointed geographer to the King of Spain, Philipp II.

Also remarkable is that Ortelius has been the first to underline a similarity between the coasts of America and Europe-Africa and to propose continental drift as an explanation.

Abraham Ortelius is often considered as the father of the Golden Age of the Dutch cartography. His death and burial in the St. Michael‘s Abbey in Antwerp were marked by public mourning. The inscription on his tombstone reads: „Quietis cultor sine lite, uxore , prole“ (Served quietly, without accusation, wife, and offspring).

Johannes Baptista Vrients, known under numerous different names was an established Antwerp publisher. In 1600 he acquired the plates of the „Epitome“ and subsequently the plates of the „Theatrum“, too. In 1601 Vrients published the new version of the „Epitome“. The maps are mostly similar to those of Galle (see No. 11) but remade with minor changes.

This miniature map from the new version of „Epitome“ is made by the brothers Ambrose and Ferdinand Arsenius who had been assistants of Frans Hogenberg and co-engravers of Ortelius‘ „Theatrum“ and has a title cartouche in the lower right corner.

In comparison Ortelius‘ atlas of 1585  the map suffers from the described reduction in size which has claimed many of the place-names and all the creatures in the sea. There are quite a few churches depicted, amongst them the bishoprics Skalholt and Holar. The famous volcano is named („Hecla mons“) but only one of many mountains on the map. The main differences between this map and the former Ortelius/Galle map of 1598 are the headline (here „Septen = 36|0 trio“), the distance scale (here „scala milliarium“), the border (here double line) and the addition of longitudes and latitudes which leads to a larger size of this map.