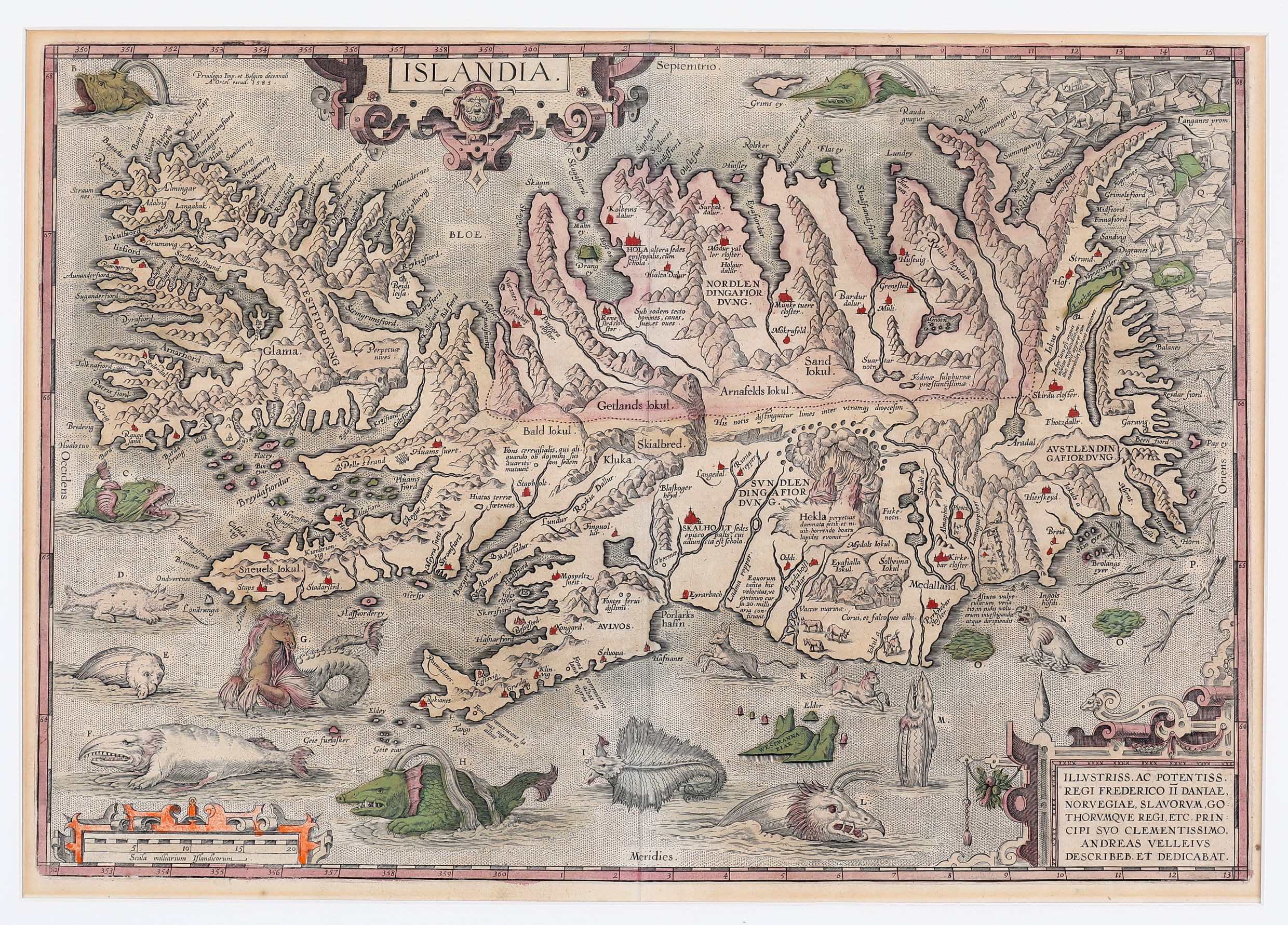 was a Flemish/Dutch mapmaker and is perhaps the best known and most frequently collected of all sixteenth-century mapmakers. He was born in Antwerp which was then in the Habsburg Netherlands (now Belgium). The „Ortellius“ family was originally from Augsburg/Germany, a Free Imperial City of the Holy Roman Empire. Abraham started his career as a map engraver. In 1547 he entered the Antwerp Guild of Saint Luke as „afsetter van Karten“ (illuminator of maps) and became a business man dealing with books, prints and maps. He travelled a lot and at the Frankfurt book and print fair he met Gerardus Mercator in 1554. Due to his influence Ortelius seems to have been attracted towards the career of a scientific geographer. In 1564 Ortelius published his first map „Typus Orbis Terrarum“, an eight-leaved wall map of the world and in 1570 the Atlas „Theatrum Orbis Terrarum“ (The Theatre of the World) with 53 maps. „The publication of this atlas marked an epoch in the history of cartography. It was the first uniformly sized, systematic collection of maps of the countries of the world based on contemporary knowledge and in that sense may be called the first modern atlas“ (Tooley, Maps and Mapmakers). in 1573 Ortelius started editing supplementary maps under the title „Additamentum Theatri Orbis Terrarum“. In 1575 he was appointed geographer of the King of Spain, Philipp II.
By the time of his death in 1598, a total of 25 editions were published including editions in Latin, Italian, German, French and Dutch and the atlas has tripled in size over the decades; later editions were issued in Spanish and English by Ortelius‘ successors Galle and  Vrients. Over the decades the atlas has tripled in size. The final edition was published in 1612.

In 1590 Abraham Ortelius published the supplement „Additamentum IV“ to his atlas „Theatrum Orbis Terrarum“, in which amongst the new maps, this map of Iceland „Islandia“ is to be found. The author and the printing year are to be found in the upoer part of the map between the title and the sea monster B.: „Privilegio Imp. et Belgico decennah A. Ortel. excud. 1585“. In the lower right corner there is a dedication to the illustrious and powerful Frederick II, King of the Danes, Norwegians, Slavs, Goths etc., his most merciful Majesty, by Andreas Velleius (Andreas Sorensen Vedel) (1542 – 1616), a well-known Danish historian of the period. Ortelius seems to have received the map directly from Vedel’s own hands without knowing that Vedel was not the maker of the map.

„The map is so superior to all earlier maps of Iceland in content and execution that an Icelander must be its originator“ (islandskort.is) most likely Gudbrandur Thorlaksson, bishop of Holar. He had studied mathematics and astronomy alongside theology in Copenhagen. The map of Iceland by bishop Gudbrandur does no longer exist and it is not known  when he made it or which resources he had at his disposal. There is no evidence of any contact between Vedel and the bishop.

Ortelius‘ „Islandia“ is one of the most decorative atlas maps of all time.

The map depicts Iceland in remarkable detail, including its settlements, mountains, fjords, glaciers. However, a striking thing is how angular the country is. The south and east coasts are far to straight instead of being curved. The width is too large in relation to the length, „a tendency which continued to plague maps of Iceland for a long time“ (islandskort.is) The country is also placed too far north.

The upper right corner shows polar bears floating  on icebergs just off the coast and all along the south coast driftwood is to be seen which was an important resource as lumber was scarce. (Icelandic Sagas describe feuds over the right to harvest driftwood along certain stretches of the coastline.)

The central highlands are extremely poorly represented because little was known about them then and also much later. Most of the principal glaciers are named on the map but surprisingly Vatnajökull, the largest glacier in Europe is missing.

The map includes over 200 place names, primarily Danish in origin and many of which are likely misread from the original map.

The map illustrates a remarkable array of the legendary and mythical sea monsters and creatures of the 15th and 16th century, along with early depictions of the sea horse, manta ray, walrus and whale. Some of the more purely fanciful images may derive from tales of St. Brendan, a sixth century Irish missionary who, according to a legend, journeyed to Iceland and whose name is associated with a mythical island of the same name. Others are traceable to Olaus Magnus‘s „Carta Marina“ of 1539, although they were probably derived directly from Munster‘s „Cosmographia“ of 1545 and most probably Munster‘s „Meerwunder und seltzame Thier/wie die in den Mitnächtigen Ländern /im Meer“ (Chart of the Sea and Land Creatures). „It is not out of the question that some such drawings may have accompanied bishop Gudbrandur‘s map, since he was a most accomplished draughtsman“ (islandskort.is). The sea monsters are identified with the letters A – Q which are keyed to the explanation on the verso.

On the back of this map is a description of Iceland. (The text of the English edition can be found at islandskort.is.).

„Here for the first time we find a map giving a more or less complete survey of all settlements in the country and most places of interest“ (islandskort.is).

This map has been the third we acquired. It was offered by the „Antiquariat Stenderhoff“ in Münster, Westphalia where we both have studied. The Ortelius map was rather expensive and – just married – not affordable for us. We asked the dealer whether we could pay the purchase price in six instalments and fortunately, he agreed.