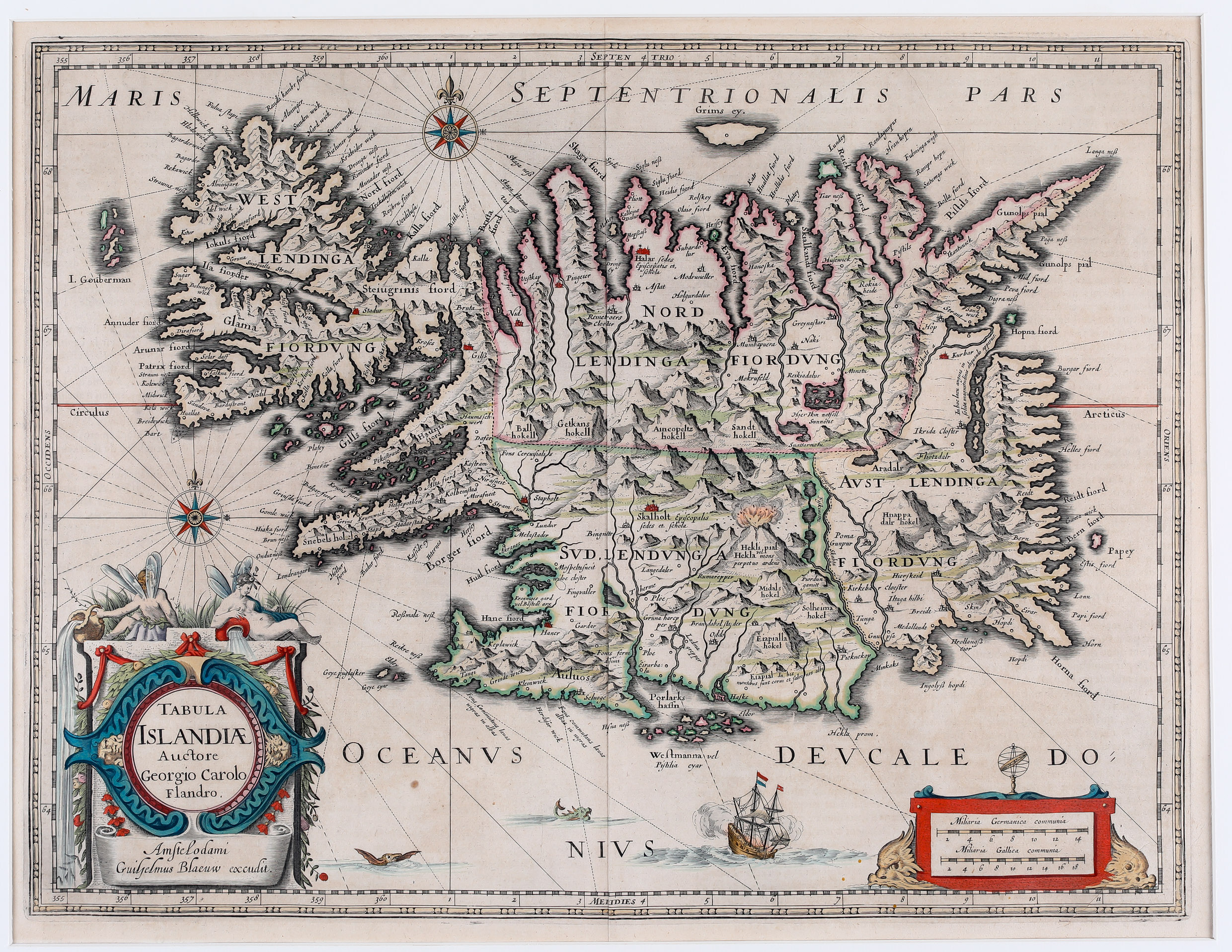 Joris Carolus, apparently a native of Enkhuizen, lost a leg in the „Siege of Ostend“ at the beginning of the 17th century. After that he turned to the art of navigation and became a „Stierman“ (pilot) for the whaling company „Noordsche Compagnie“. He claimed to have reached 83 degrees N and definitely reached the islands of Jan Mayen and Spitsbergen, the Davis Strait region and Baffin Bay. He even spent some time in Iceland. After his retirement he settled in Amsterdam as teacher of navigation and became a cartographer.

Willem Janszoon Blaeu, born in Uitgeest or Alkmaar, was the founder of the Blaeu cartographic dynasty, the finest mapmakers in the Golden Age of Dutch Cartography (the 16th and 17th century). As the son of a herring salesman, he was destined to succeed his father in the trade, but his interests lay more in mathematics and astronomy. Between 1594 and 1596, as a student of the famous Danish astronomer Tycho Brahe, he qualified as an instrument and globe maker. By the turn of the century  Blaeu returned to Holland and started his own business, producing globes, instruments and maps in Amsterdam, over time becoming the largest printing company in Europe in the 17th century. It is estimated that over 80 men must have been employed full-time in the Blaeu printing house in Bloemgracht, not including engravers who worked elsewhere, with over 15 printing presses running simultaneously.
Willem‘s sons Johannes (1596 – 1673) and Cornelis (1610 – 1642) joined him in the firm, with the eldest Johannes quickly assuming the lead. After his study of mathematics and astronomy at the University of Leiden, Willem and Johannes produced their first 60-map volume in 1630 with the title „Atlantis Appendix“. The title was deliberately chosen to position the atlas as a supplement to the well-respected atlases of Abraham Ortelius and Gerard Mercator, an area of the market where the Hondius family held the monopoly.
After Willem Janszoon Blaeu’s death his two sons Johannes (1596 – 1673) and Cornelis (1610 – 1642) took over the mapmaking and publishing business. As Cornelis died a few years later, Johannes became the sole proprietor and embarked on an ambitious project to further compete with Janssonius, the „Atlas Maior“, the largest and grandest atlas of its time. In 1672 the Blaeu publishing house suffered a devastating fire, destroying one of the printing presses and many copperplates. Johannes died the following year and his reviving stocks of plates and maps were dispersed, some of the plates being bought by Frederick de Wit, Pieter Schenk and Gerard Valck before closure in 1695.

This stunning map of Iceland is taken from „Atlantis Appendix“ in 1630. The plate was part of the stock which Willem Janszoon Blaeu had bought from the widow of Jodocus Hondius the Younger after his death in 1629. The map is slightly bigger than the famous maps of Abraham Ortelius 1590 and Gerardus Mercator 1595.
„On the map the length of Iceland is much the same as on Mercator‘s map, but the breadth is rather less, so that the proportion is nearer to the true one. The map shows the influence on both versions of bishop Gudbrandur‘s map. The coastline resembles more Ortelius, but when it comes to place the map follows Mercator in selection and spelling. In spite of many errors, some of them serious, the map is a step in the right direction“(islandskort.is).

The ornamental title cartouche features two winged sprites, an important symbol of the Icelandic and Norse mythology. The title is nearly the same as in the Carolus-Hondius version of 1628/29. It includes the name „Auctore Giorgio Carolo Flandro“ and the place-name „Amstelodami“ but the publisher is no longer „Judocus Hondius“ but „Guilhelmus Blaeuw“. Furthermore the map is richly embellished with a distance scale cartouche, compass roses, rhumb lines, a sailing ship, two sea monsters, animals and a breathtaking scene of an erupting vulcano with the text: „Hekla mons perpetuo ardens“ which suggests that the volcano was constantly active at the time. The island‘s topography with mountain chains, rivers, lakes, glaciers and settlements is beautifully depicted. There are many place-names including the bishoprics Skalholt and Holar („Halar“), each with the text: „Episcopalis sedes et. schola“.

Compared with the Ortelius and Mercator maps of Iceland improvements are hardly to be discovered but there are some errors, for example the „I. Gouberman“ near to the Westfjords actually not exists.