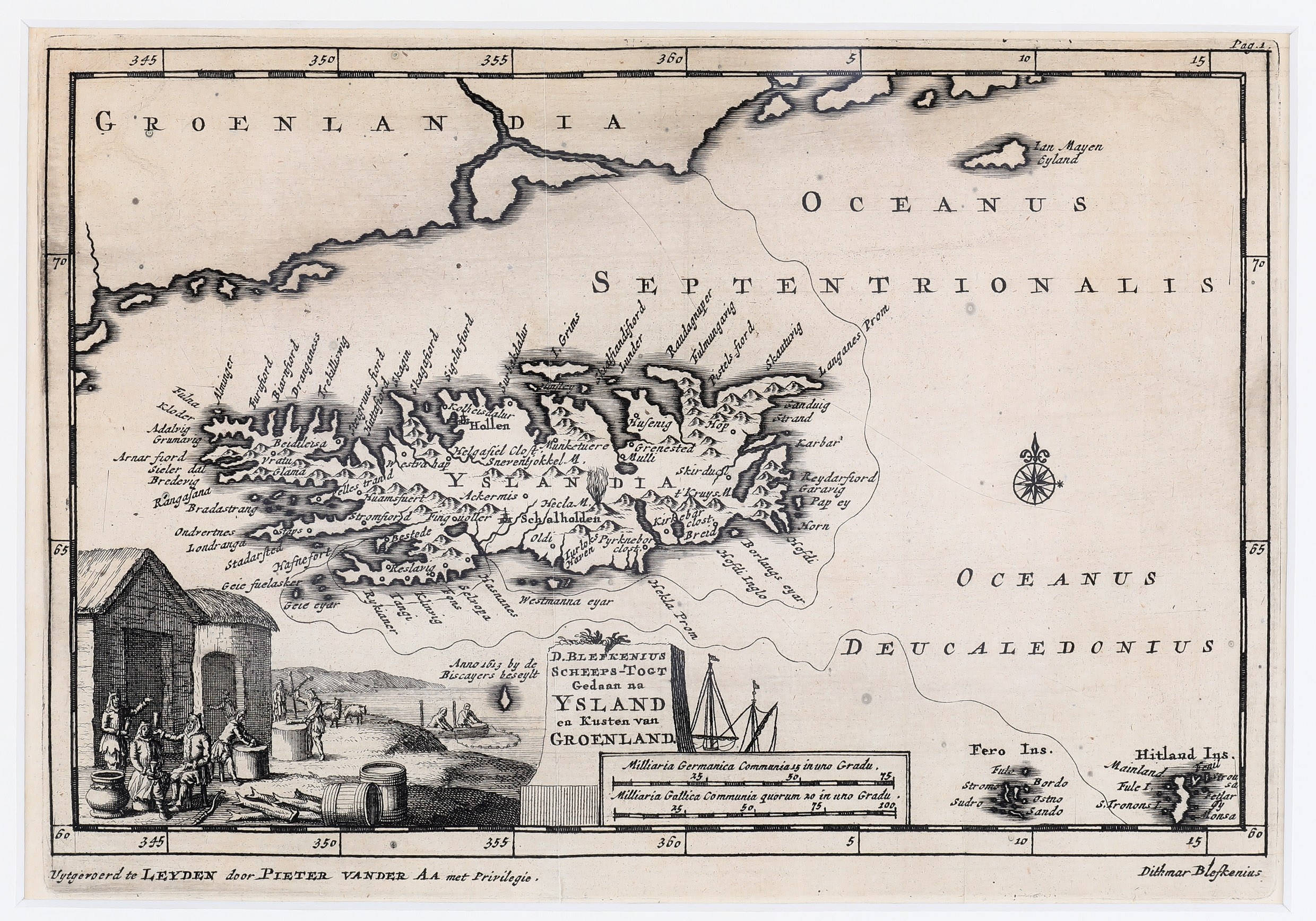 was a Dutch publisher and bookseller, born in Leyden to a German woodcutter from Holstein. All three van der Aa sons came to be involved in the printing business. While Hildebrand worked as a copper engraver and Boudeweyn as a printer Pieter is best known for his voluminous output of maps and atlases. Already in the age of 23 he owned a bookshop and an auction house. He increasingly specialized in books on geography and travel. Already in 1677 Pieter van der Aa became Member of the Bookseller Guild, in 1715 Headprinter of the City of Leyden and shortly later Headprinter of its famous University. Within 50 years in the business he published a huge amount of highly decorative maps and atlases. In 1706, the „Naaukeurige Versameling Der Gedenk-waardigste Zee en Land-reysen“ (Collection of memorable sea and land voyages) appeared. In 1713 he published the „Nouvel Atlas, tres-exact et fort commode pour toutes sortes de personnes, Contenant les principales cartes geographiques“ and in 1714 the „Atlas nouveau et curieux des plus Celebres Itineraires“. In 1729 „La Galerie Agreable du Monde“ was completed and comprised 66 parts, bound in 1627 volumes. Van der Aa‘s works are richly illustrated with maps and plates but many of them contain a curious mixture of his own material, copies of maps of. other publishers and reprints made from older plates, now with his own imprint. After his death his stock was auctioned and most of it went to Covens & Mortier.

This rare map is from van der Aa’s „Versameling“ of 1706. Its 17th volume is a re-publication of one of the most read and curious travel books of the 17th century which was published in Leyden in 1607 in Latin language under the title: „Islandia, sive populorum et mirabilium, quae in ea insula reperiuntur, accuratior descriptio, cui de Groenlandia sub finem quaedam adiecta“. The author was Dithmar Blefken, a German preacher who claimed to have traveled to Iceland while accompanying merchants from Hamburg. He depicts not only his adventures in Iceland but also the nature, the history and the inhabitants of the island. His descriptions are a mixture of poetry and truth with lots of exaggerations. Especially his vicious and insulting stories about the Icelanders disgusted the scholar Arngrimur Jonsson so much that he published a fierce critic of Blefken‘s work under the title „Anatome Blefkeniana“ in which he also suspects that Blefken has never visited Iceland and other Nordic countries. Nevertheless Blefken‘s book was printed 17 times and marked the image of Iceland for more than a century as van der Aa’s reprint of 1706 illustrates.

Two translations of Blefken‘s book deserve special consideration because they contain maps of Iceland: Hieronymus Megiser‘s „Septentrio Novantiquus“ in 1613 and the English translation in the third volume of Samuel Purchas‘s „Pilgrims“ in 1625.

Van der Aa‘s map of Iceland is dominated by a huge impressive rural scene in the lower left corner. To its right a simple title cartouche is pressed between this decorative depiction and a sailing ship with a distance scale underneath. In the ocean on the right
ia nice compass rose is to be seen. The map depicts also the Jan Mayen Island, the Faroe Islands, the Shetland Islands („Hitland“ and the southeast coast of Greenland.

The shape of Iceland is rather unsightly. North and south are shrunked, with east and west distancing. „The spelling of the place-names suggests that the model was the Ortelius‘ version of the map by Gudbrandur Thorlaksson but probably with some elements added from older French maps of Iceland“ (islandskort.is). The bishoprics Skalholt („Schalholdin“) and Holar („Hollen“) are depicted with church symbols. Hekla is to be seen erupting. Glaciers and also the Arctic Circle are missing.