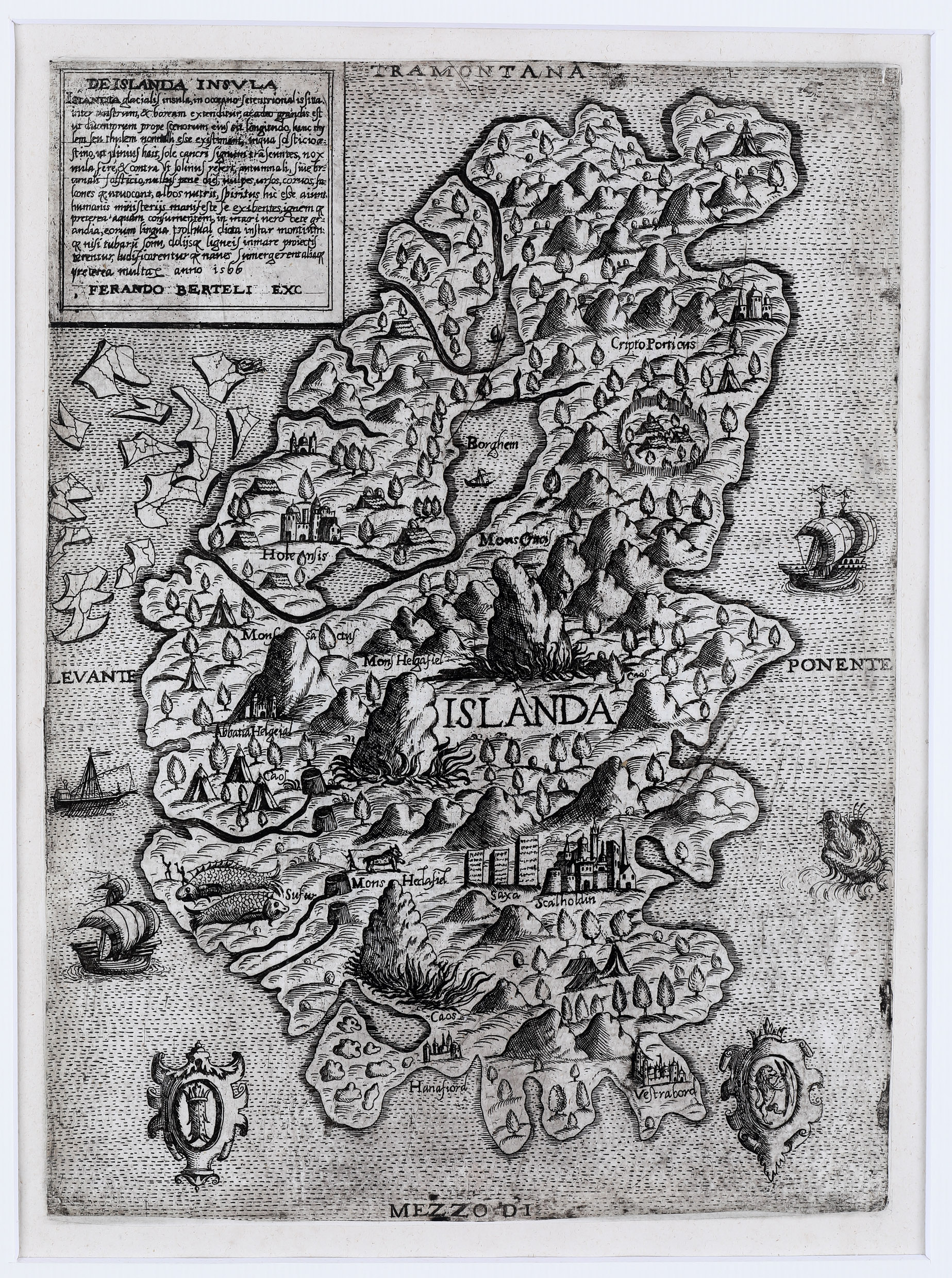 was an important early engraver, book and print publisher who worked in Venice.
Nothing is known about his life besides that he was one of a group of 16th century mapmakers often referred to as „Lafreri School“, named after the Roman mapmaker and publisher Antonio Lafreri (1512 – 1577). Associated with Lafreri maps are among others Giacomo Gastaldi,  Giovanni Francesco Camocio of whom maps are in the „Schulte Collection“. Normally maps were issued loose but Lafreri assembled his large stock of maps (about 660), made by engravers both from Rome and Venice into composite atlases. Customers could could order specific maps to be bound together, tailored to the needs or tastes of individuals. As a consequence the contents of the few atlases which have survived differ from one another. „Although the whole production of the so-called Lafreri maps must have been fairly substantial, most are uncommon if not scarce today“ (Ginsberg p. 70). The Lafreri School maps are regarded the earliest obtainable maps of various regions of the world.

„Although Iceland is derived from Olaus Magnus’ „Carta Marina“ of 1539, the cartographer Ferando Berteli inexplicably reversed east and west“ (Ginsberg p. 70).
The title cartouche in the upper part („Tramontana“) gives explanations in Latin and ends with: „… anno is66 Ferando Berteli EXC“. In the lower part („Mezzodi“) there are two decorative crests in the left and right corner. In the middle of the map „Islanda“ is written. Sailing vessels and icebergs are on the left; another sailing vessel and a big sea monster are on the right. Information on degrees and scale is not given.

In the interior of Iceland some settlements are named including the two bishoprics. „Scaloldin“ (Skalholt) is characterized by a big church which looks like an Italian cathedral, „Holensis“ (Holar) by a smaller church. Other churches are connected with the names „Abbatia Helgeial“ and „Hanafiord“. „Vestrabord“ looks like a fortress.
There are four mountains („Mons“): Crucis, Sanctus, Helgafiel and Heclafiel of which „Helgafiel“ and „Heclafiel“ (the famous volcano Hekla) are highlighted by a big fire and described as „Caos“. „Sulfur“ most likely stands for sulphur springs (but why are two fish next to them). Other names are „Saxa“ and „Cripto Porticus“.

At first glimpse this map and Camocio’s map of 1571/72 look identical but there are quite a few differences in detail. The size of that map is reduced because the edges are smaller. In the ocean around Iceland the sea monster and the sailing vessels have been omitted. The title cartouche in the upper left corner has the same text but Berteli‘s name and the year of publication have been deleted. The vignettes in the lower part are empty, „Ostro“ replaces „Mezzodi“ and „84“ is written next to the right vignette.

The acquisition of this very early and rare map is an intriguing history. It was offered for sale at a Sotheby‘s auction in London at 19 November 1992. My wife and II decided to make a bid  – and we won! We looked forward to receive the invoice or the map or both but nothing happened. After four weeks I phoned Sotheby‘s and asked what is wrong. I was told the invoice had not been paid and I replied that I did not receive an invoice. A copy was sent by fax and I could not believe my eyes. The invoice was addressed with my name and street but to Johannesburg/South Africa! However the correct place-name is: D 65366 Geisenheim-Johannisberg. (Geisenheim is the community and the suburb is the picturesque wine village Johannisberg.) Obviously somebody at Sotheby‘s could not believe that there is a place in Germany named Johannisberg. We dreaded to think about what had happened if the invoice with map had been sent to Johannesburg/South Africa.