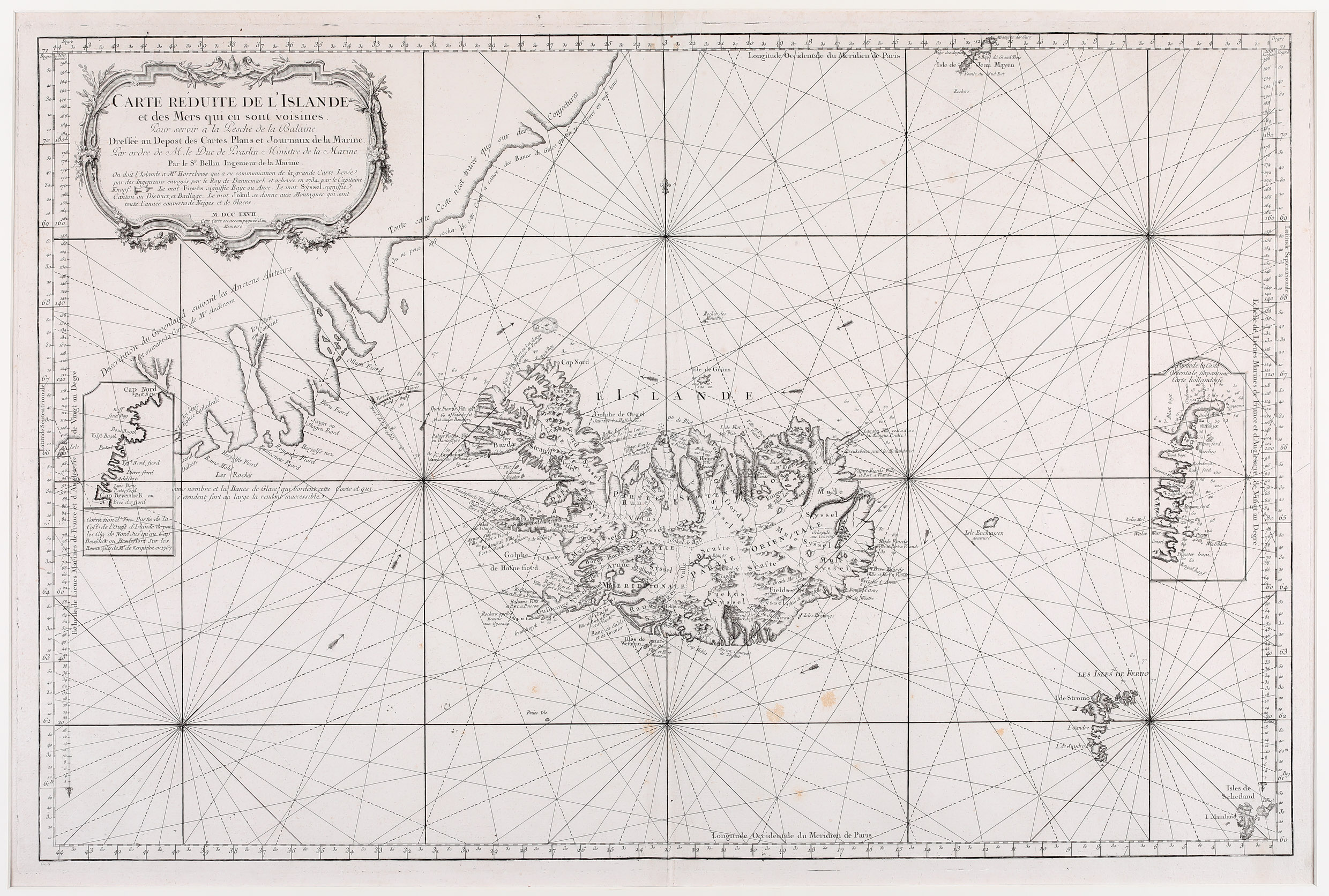 was a French hydrographer, geographer and member of the intellectual group „Philosophes“. Born in Paris, at the age of 18 years, he was appointed hydrographer to the French Navy. In 1741 Bellin became the first „Ingenieur de la Marine“ of the „Depot des Cartes et Plants de la Marine“ (French Hydrographical Office) and was named „Hydrographe Officiel du Roy de France“. During his reign the Depot published a prodigious number of maps and atlases, e.g. the „Atlas Maritime“ (1764) and the „Petit Atlas Maritime“ (1764). Bellin also contributed a number of maps to the „Histoire Generale des Voyages“ of Antoine Francois Prevost d‘Exiles (1697 – 1763), a French author and novelist (e.g. „Manon Lescaut“), simply known as „l‘Abbe Prevost“. Prevost’s collection was printed for the first time in 1746 and it continued until 1789, more than 20 years after his death. Many of Bellin‘s maps were copied by other mapmakers.
Bellin‘s work focussed on function and accuracy, tending to be less decorative than the 17th century cartographic images, thus gaining for France the leading role in European cartography in the 18th century.

A large decorative cartouche in the upper left corner dominates this sea-chart and contains the title which translated  into  English is „reduced Map of Iceland and of the neighbouring seas“. As promised,  the map shows Iceland in the center of the North Atlantic. Furthermore Niels Horrebow is mentioned as source for Iceland referring to the voyage of „Capitaine Knopf“ im 1734. Also the words „Fjord“, „Syssel“ and „Jokul“ are explained.

The map depicts the southeast coast of Greenland, the Faroe Islands, the Shetland Islands and Jan Mayen. North of the island Grimsey is a rock in the ocean named „Rocher des Mouettes“ and east of Iceland is the island of Enchuysen, discovered by Joris Carolus and named after his hometown but in reality non-existing.

Underneath the title cartouche Bellin placed the information that the description of Greenland is according to ancient authors and the map of Anderson (which the Mayor of Hamburg had published in his book „Nachrichten von Island, Grönland und der Straße Davis“ in 1746). In and outside the coastline of Greenland there are warnings written that it is based on guesses and that the approach is difficult all year round because of the sea ice. Two inset maps of the west and east coasts of Iceland are depicted at the left and right borders of the map. As it is a sea-chart, destined to the crew of sailing vessels there are rhumb lines and numerous depth soundings. The Arctic Circle is not marked.

The shape of Iceland is from Knoff‘s map, used by Niels Horrebow first in his book
„Tilforladelige Efterretninger“ in 1752. Obviously Bellin had no knowledge of a better version of the Knoff map, the one by Homann Heirs of 1761. Very unusual for a sea-chart the interior of Iceland is depicted in great detail. Many glaciers („jokul“), rivers, lakes. fjords, settlements and  districts („syssel“) are named. The famous volcano Hekla is seen erupting. The two bishoprics Skalholt („Scalhol Ville Episcopale“) and Holar („Holum Ville Espiscop“) are hightlighted.

There was a period in which for some years no map of Iceland had been offered to us and were a bit worried. Then we discovered this sea-chart of the North Atlantic and we thought it is a decorative supplement to our collection. At the time we could not have imagined that this map would be the nucleus of an important category in the „Schulte Collection“.