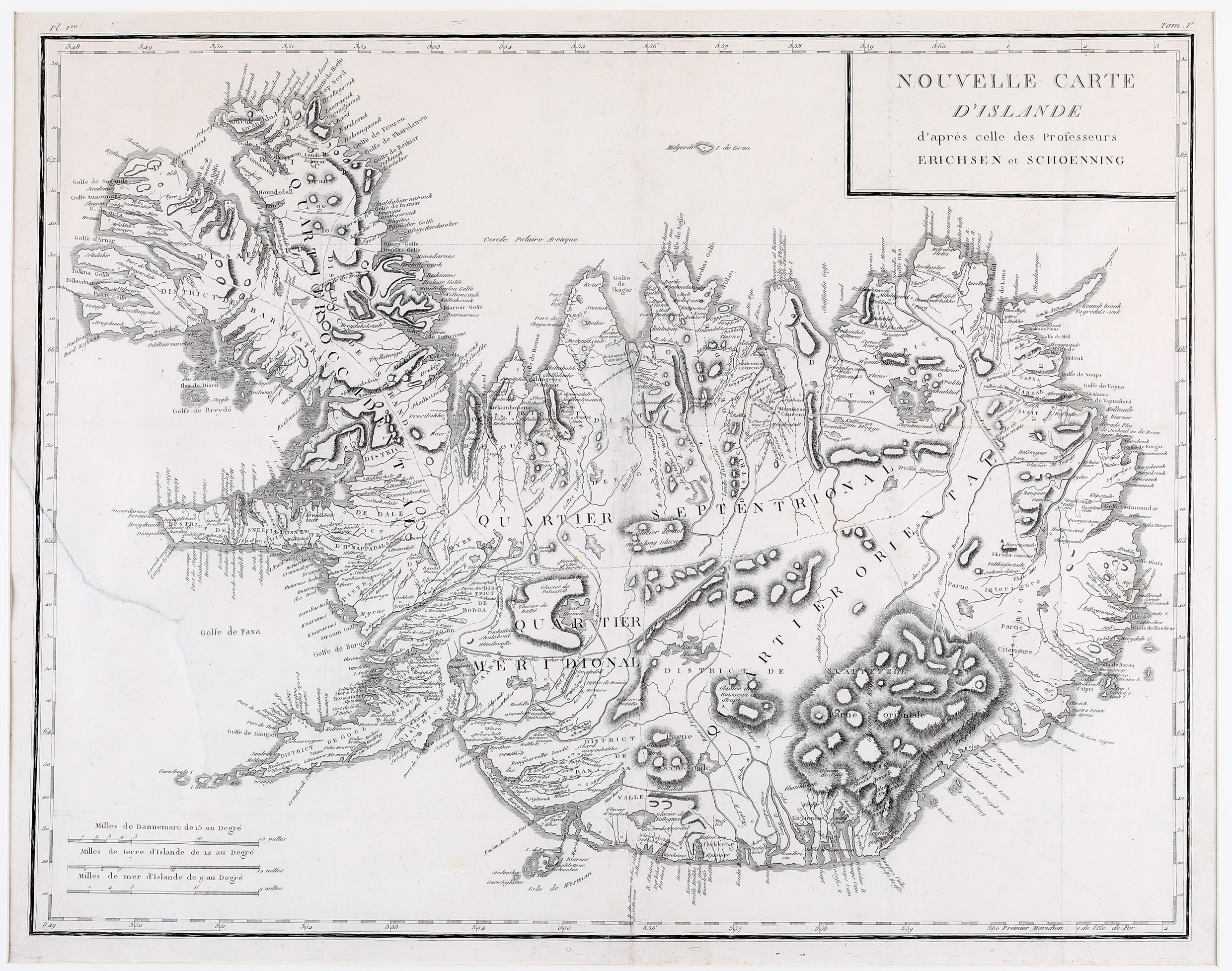 Jon Eiriksson or Eriksson or Erichsen was an Icelandic lawyer and judge.
Nothing more is to be found about his life.

Gerhard Schoening or Schoenning, born in Lofoten, was a Norwegian historian and studied theology at the University of Copenhagen. 1750 he was appointed rector at Trondheim Cathedral School and in 1765 Professor of Rhetoric and History at the Soroe Academy, one of the oldest schools in Denmark. Schoening published intensively. His main work is about the History of the Kingdom of Norway.

Both persons were selected by the Royal Academy of Sciences for a special task. The background is as follows: „In 1752 two Icelanders Eggert Olafsson and Bjarni Palsson were sent to Iceland from Copenhagen to carry out a scientific reconnaissance of the country. They pursued their researches for the next six summers until 1757. It was Eggert‘s role to record the results but he was drowned in Breidarfjördur before the book could be printed, so others had to see to its publication. Two excellent men were selected for the task, Jon Eiriksson and Gerhard Schoening“ (islandskort.is).

Eggert Olafsson or Olafsen (1726 – 1768), born as son of a farmer from Snefneyjar in Breidafjördur, studied Natural Sciences, Classics, Grammar, Law and Agriculture at the University of Copenhagen.

Bjarni Palsson or Povelsen (1719 – 1779), born as son of a farmer in Upsum near Dalvik at Eyjafjördur, studied Medicine at the University of Copenhagen.

Both published a book about their scientific and cultural survey, under their Danish names, first in 1772 in Danish language: („In Reise igiennem Island“) accompanied by a map from Eiriksson & Schoening, titled “Nyt Carte over Island“ (A New Map of Iceland) which is dated 1771 but 1772 is the publishing date. The book was translated into German („Reise durch Island“) in 1774, containing the same map, and into French („Voyage en Islande“) in 1802 with a different map. A condensed version of the book appeared in 1805 in English („Travels in Iceland“) with a much reduced map. An Icelandic translation was not edited until 1943.

The two friends also became known for the first ascents of the famous volcano Hekla (1750) and of the glacier Snaefellsjökull (1753).

The source is Homann’s map of 1761 which in turn was based on the map by Thomas Hans Henrik Knoff from 1734“. „The location of the country and the coastlines are for the most parts unchanged, but various minor changes have been made inland, a few place-names added and these generally given Icelandic forms, though Danish forms and inflections find their way in too. The German and Latin texts are omitted, and various corrections made“ (islandskort.is).

This map from the French edition is similar in size but lacks the details of the original map of 1771 (1772). Its title is in a rather simple rectangle in the upper right corner and three distance scales without frame are in the lower left quadrant. Mountains, glaciers, rivers, lakes, forests and fjords are depicted in less detail. Europe’s largest glacier Vatnajökull, the famous volcano Hekla and the bishoprics Skalholt and Holar are not even mentioned.

Iceland‘s capital which in the original of 1771 (1772) appeared for the first time on a map of Iceland, spelled „Reikiabiik“, is written „Reikiavuk“; obviously the engraver misinterpreted the „ii“ and thought it is „u“.

The German, French and English editions of Olafssens & Palsson‘s pioneering work are in my private book collection, including the maps of Iceland.