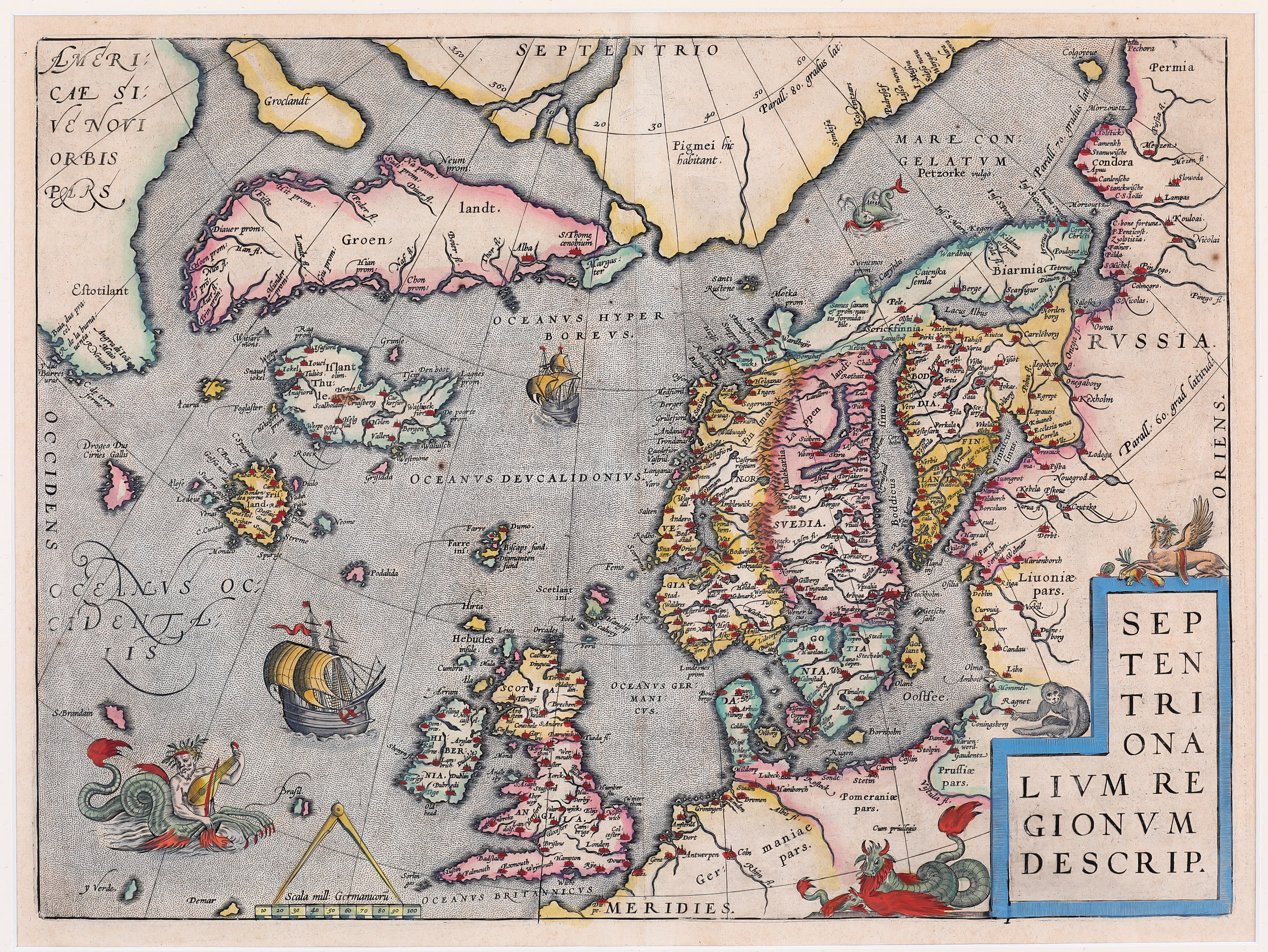 was a Flemish/Dutch mapmaker and is perhaps the best known and most frequently collected of all sixteenth-century mapmakers. He was born in Antwerp which was then in the Habsburg Netherlands (now Belgium). The „Ortellius“family was originally from Augsburg/Germany, a Free Imperial City of the Holy Roman Empire. Abraham started his career as a map engraver. In 1547 he entered the Antwerp Guild of Saint Luke as „afsetter van Karten“ (illuminator of maps) and became a business man dealing with books, prints and maps. He travelled a lot and at the Frankfurt book and print fair he met Gerardus Mercator in 1554. Due to his influence Ortelius seems to have been attracted towards the career of a scientific geographer. In 1564 Ortelius published his first map „Typus Orbis Terrarum“, an eight-leaved wall map of the world and in 1570 the Atlas „Theatrum Orbis Terrarum“ (Theatre of the World) with 53 maps. „The publication of this atlas marked an epoch in the history of cartography. It was the first uniformly sized, systematic collection of maps of the countries of the world based on contemporary knowledge and in that sense may be called the first modern atlas“ (Tooley, Maps and Mapmakers). In 1573 Ortelius started editing supplementary maps under the title „Additamentum Theatri Orbis Terrarum. In 1575 he was appointed geographer to the King of Spain, Philipp II.
By the time of his death in 1598, a total of 25 editions were published including editions in Latin, Italian, German, French and Dutch; later editions were issued in Spanish and English by Ortelius‘ successors Galle and Vrients. Over the decades the atlas has tripled in size. The final edition was published in 1612.

When this impressive map appeared in „Theatrum“ it was probably the best one of the North Atlantic so far, showing Scandinavia in detail, clearly summarizing the knowledge of 16th century geographers. Ortelius cited an array of cartographers whose ideas contributed to this map.

According to islandskort.is, Greenland and „Estotiland“ (a region located where Labrador, Quebec and Newfoundland are now situated) were drawn largely from Jakob Ziegler (c. 1470 – 1549). The fictional island of „Frisland“ is related to the chart of the North Atlantic by Nicolo Zeno (1515 – 1565). The outline of Scandinavia itself shows the strong influence of the „Carta Marina“ map of Olaus Magnus (1490 – 1557). The high Arctic is drawn from Gerardus Mercator‘s Wall map of 1569.

Ortelius depicts a large area of the North Atlantic, extending from Scandinavia and the Polar regions in the Arctic Circle and in the East, to Greenland, Iceland and North America („Estotiland“). Also included are the mythical islands of „Frisland“, „Icaria“, „Drogeo“, „S. Brandam“, „Grislada“, „Podalida“ and „Brasil“.

The outline of Scandinavia is impressively accurate, bordering the „Mare Congelatum“ (Frozen Sea). The map is embellished in the usual style of Ortelius, with a variety of sea monsters and mythical creatures, including a half-man half-seahorse playing something similar to a violin. On top of the title cartouche sits another creature combining aspects of a lion, a buffalo and a sea serpent, holding live prey with its paw
and on the left of it somewhat incongruously, a monkey. The ocean is decorated with two impressive frigates an a small sea monster.

The shape of Iceland is drawn from Olaus Magnus‘ „Carta Marina“ (1539). Two names are given to the country: „Islant“ and „Thule“. There are 25 place names, including Skalholt („Scalholdin“) and Holar („Holen“) but the bishoprics are wrongly placed.
One glacier is mentioned: „Snaueliokel“ (Snaefellsjökull).

The impressive map became the standard map of the region for the next 40 years.It was printed from the same copperplate until as late as 1641.