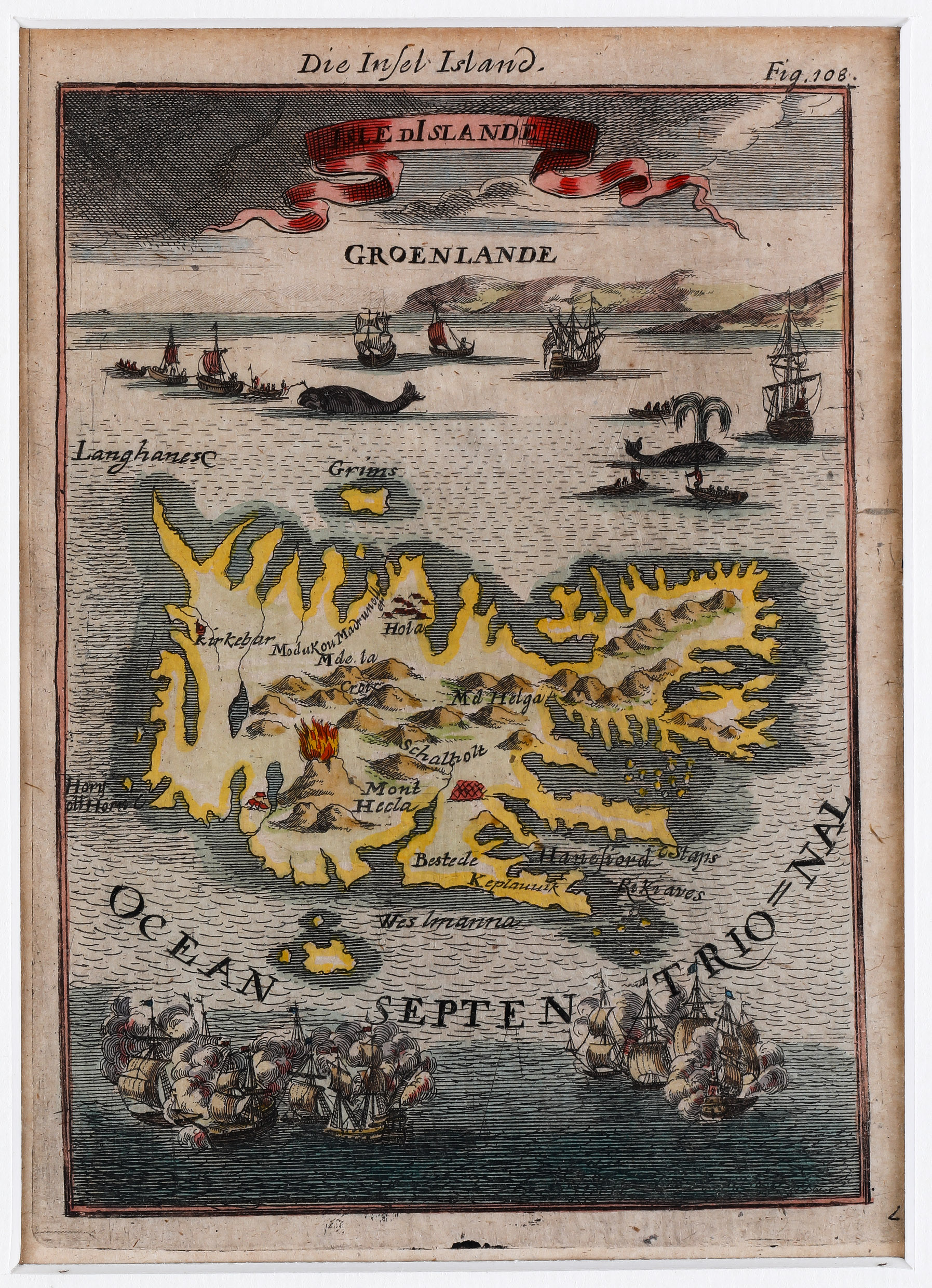 was a French well travelled military engineer, mathematician and cartographer.
He made a career in the army of King Louis XIV who appointed him „Maitre de Mathematiques“. His main work is the five-volume cosmography „Description de l‘Univers“ published in 1683 which describes the landscapes, villages, ports and people with their habits and traditions in the regions of the known world. The atlas also contains numerous maps, including a map of the North Atlantic and a map of Iceland. Two years later Mallet published the German edition titled „Beschreibung des gantzen Welt-Kreysses“ which comprises this map of Iceland.

The title of this miniature map „Isle dIslande“ is printed in a winding banner on top of the sheet but above the map the German translation „Die Insel Island“ is written. Underneath is a profile view of Greenland which shows mountains in the background. In the ocean between Greenland and Iceland several whaling vessels are hunting and harpooning large whales from small boats and at the bottom two armies are fighting a sea battle.

This miniature map from „Beschreibung des gantzen Welt-Kreysses“ (1685) resembles the one from „Description de l‘Universe“ (1683). In the German version of the atlas the plates are close copies of the originals with German names besides the French ones.
However, when it came to the map of Iceland an obvious error was committed by the engraver: he produced a mirror image of the one in the French edition. This can be seen especially well when looking at the Western Fjords which are now in the East. The scenes in the ocean are also in reverse. Strange enough, the engraver did not copy the mountains of Greenland in the background but drew only part of them and replaced the the rest by waves.

In the interior of Iceland there are only a few place-names, including „Rikiaves“ (Reykjavik?), „Koplavnik“ (Kopavogur?), „Bestede“ (Bessastadir?) and the bishoprics „Schalholt“ (Skalholt) and „Hola“ (Holar). Also lots of volcanic cones are depicted. „Mont Hecla“ (Hekla) is shown erupting vigorously and this stunning depiction is probably the first stand-alone picture of that famous volcano, according to Haraldur Sigurdsson, Kortasaga Islands, 1978.