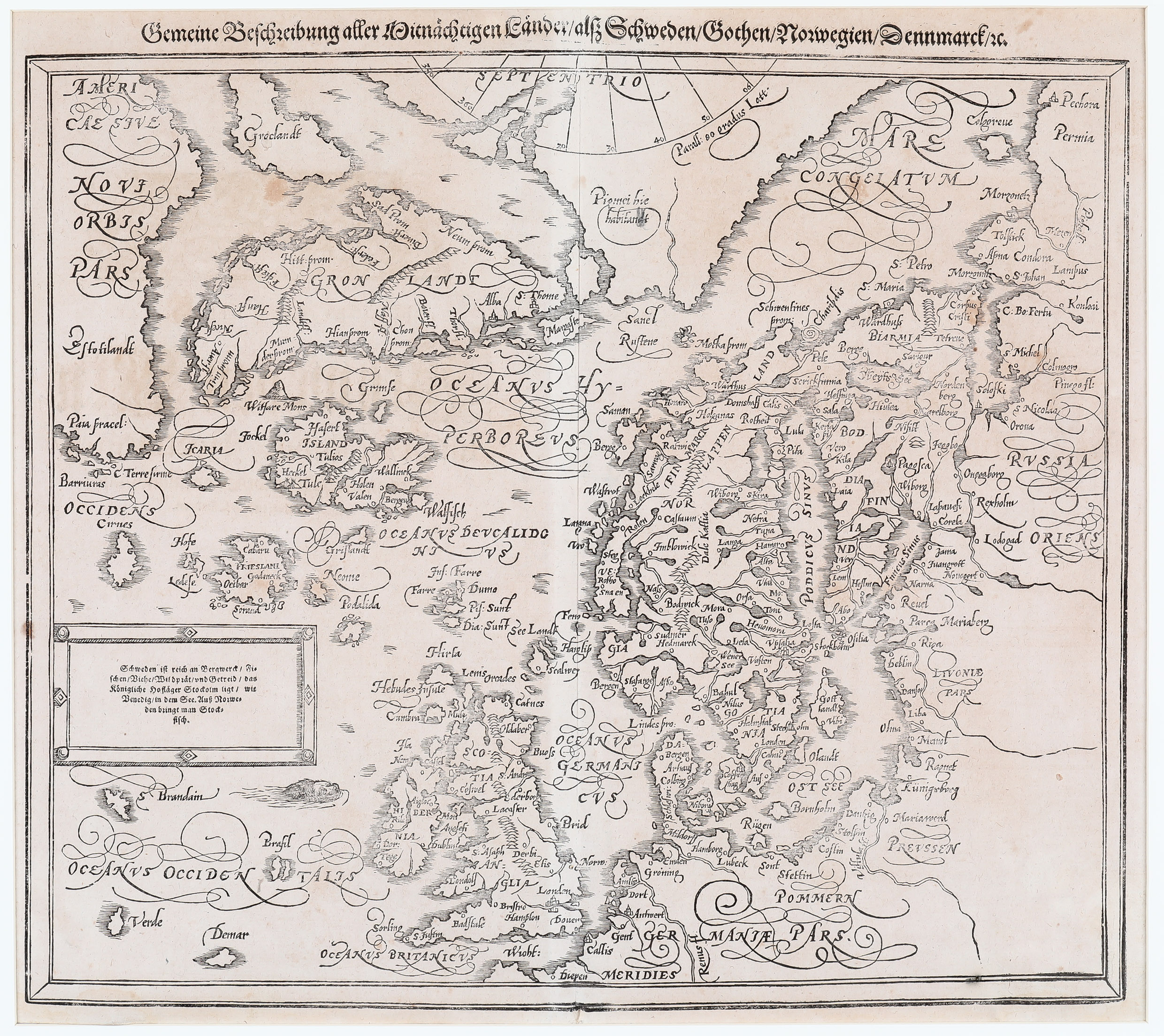 born in Ingelheim, near Mainz, was a German cartographer, cosmographer and Professor of Hebrew. As a young man, he joined the Franciscan order in which he became a priest and then studied geography at the University of Tübingen. In 1518 he moved to Basel where he started to publish a Hebrew Grammar and three years later he moved again, to Heidelberg where he continued to publish Hebrew texts. After converting to Protestantism in 1529, he took over the chair of Hebrew at the University of Basel where he edited his main Hebrew work, a two-volume Old Testament, accompanied by a Latin translation. He also published a book on the basics of geometry „Rudimenta Mathematica“. In 1525 Sebastian Münster published his first known map, a map of Germany and in 1536 he released a map of Europe „Mappa Europae“. The first map of the Nordics titled „Schonlandia“ appeared in „Geographia“ he compiled in 1540. Its geographic content is based on Jacob Ziegler‘s map of 1532.

Sebastian Münster’s work „Cosmographia“ from 1544, printed at Heinrich Petri in Basel, was the earliest German-language description of the world and had numerous editions in Latin, French, Italian, English and Czech until 1628, but more than a half of all editions was in German language. The „Cosmographia“ was one of the most successful and popular works of the 16th century, also due to the fascinating woodcuts. One of those is „Gemeine beschreibung aller mittnächtigen Länder …“ which is loosely based on Olaus Magnus‘ „Carta Marina“ in 1539 (in Latin editions in that language „Septentrionales Regiones …“).

In 1588 Münster‘s second map of the Nordics was replaced by a new woodcut map which is inspired by Abraham Ortelius‘ „Septentrionalium“ of 1570 which in turn was based upon the mapping of Nicholas Zeno in 1558.

Sebastian Münster is regarded as one of the most famous cosmographers of the Renaissance, together with Leonardo da Vinci, Martin Behaim, Martin Waldseemüller, Petrus Apianus and Gerhard Mercator.

This attractive woodblock map is the third version of Sebastian Münster’s map of the Nordics (with the title above the map).

The map stretches from Britain to the Arctic Circle, with Scandinavia, Iceland, Northern Russia, two Greenlands („Gronlandt“ and „Groclandt“) and part of North America (called „Estotilant“). „Drogeo“ is believed to be Newfoundland. A number of mystical islands appear in the Atlantic: „Frieslani“,  „Brasil“ , „S Brendain“, „Icaria“, „Podalida“, „Neome“, „Grislandt“ and others. Near the North Pole there is a note: „Pigmei hie habitandt“ (Pymies live here).

The cartouche in the center of the left side has the text: „Schweden ist reich an Bergwerck/Fischen / Viehe / Wildbrat / und Getreid / das königliche Hoflager Stockolm ligt / wie Venedig / in dem See. Auß Norweden bringt man Stockfisch.“ (Sweden is very rich in mines, fish, cattle, game and grain, the royal court Stockolm is situated like Venice at the sea coast, From Norway you bring stockfish).

Information on „Island“ is rather poor and mysterious. A long mountain range stretches across the country. Away from it there are also two volcanos overwritten „Heckel“ which stands for Hekla. Other place-names are e.g. „Tule“, „Tulios“ and „Holen“ which surely means the bishopric Holar. Skalholt, the other bishopric, is missing.