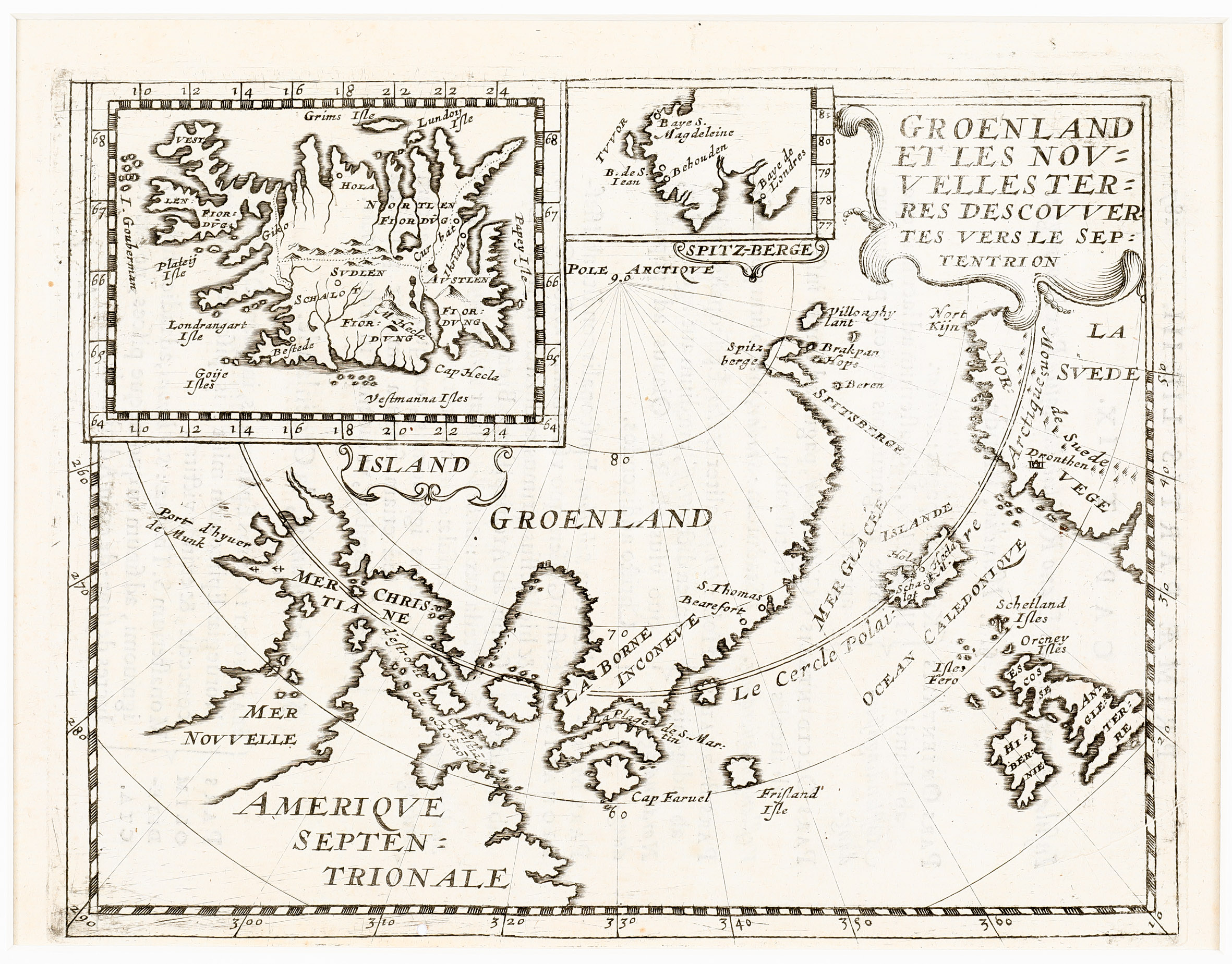 latinized name Philippus Brietius, was a French historian and cartographer in the 17th century. Born in Abbeville, he became a Jesuit at the age 18 years. He travelled to the Holy Land collecting information for his maps on his way. Briet taught geography at Rouen and at the College de Clermont in Paris. He is a notable early example of Jesuit education in cartography which developed in France in the 17th century. His most important work is  „Parallela Geographiae. Veteris et Novae …“ which was published in 1648.

This very rare miniature map taken from „Parallela Geographiae“ is based on the information from Jens Munk‘s expedition of 1619-20. Munk was sent by Denmark‘s King Christian IV – his 59 year reign is the longest of Danish and Scandinavian monasteries – to seek the Northwest Passage to the Orient. He left from Copenhagen in May  of 1619 with two ships. They entered Hudson Bay in late August and wintered near present-day Churchill, (noted on the map as „Port d‘hyver de Munk“). They spent a terrible, scurvy ridden winter, during which nearly all of the 63 crew members died. Only Munk and two crewmen survived to return to Denmark.

The map which is decorated with a nice title cartouche in the upper right corner shows mainly the countries which are crossed by the Arctic Circle: „Amerique Septentrionale“ (USA and Canada), „Groenland“, „Island“, „Norvege“, „La Svede“ (which included Finland at the time) and Russia (not named). (The Arctic Circle is marked a bit too south.) Also England, Ireland, the Faroe, Shetland and Orkney Islands are to be seen as well as the mythical „Frisland‘ Isle“. There is a large inset map of „Island“ and a smaller one of „Spitz-Berge“ at the top of the map, decorated with cartouches.

The village Churchill, the winter camp of Munk and his men, is noted as „Port d‘hyver de Munk“ and it is situated on the coast of „Mer Christiane“ (Hudson Bay). Part of it is „d‘etroit (strait) Christia ou Hotzo“.

With regard to Iceland, there are only three place-names on the main map: Skalholt („Schalot“) and Holar („Hola“), the bishoprics, and „M Hecla“ whilst the inset map of Iceland is more detailed. The shape of the country is the Joris Carolus type. In the North „Grims Isle“ and in the Northwest the mythical „I. Gouberman“  are to be seen. In the country mountain ranges, rivers and lakes are delineated and some more place-names than on the main map.

One thought did not let me go: why is the Hudson Bay named „Mer Christiane“?
Christiane is a female name. Christian IV had no sister with this name. The name of his first wife was Catherine. Is „Mer Christiane“ just a typographic mistake of the engraver meaning Christian? Or his first wife Catherine? Then I looked at the impressive list of his children born by his two wives and several  lovers (24 in total) and I discovered Countess Christiane of Schleswig-Holstein, born by his second wife Kirsten Munk as the ninth of 12 children in 1626. Christiane was born only a few years after Jens Munk‘s return from the disastrous expedition in 1619/20 but well ahead of Briet‘s mapping of this voyage in 1648. Were Jens and Kirsten Munk relatives? Was „Mer Christiane“ named after the King‘s daughter? After all my resarch, I do not know the answer.