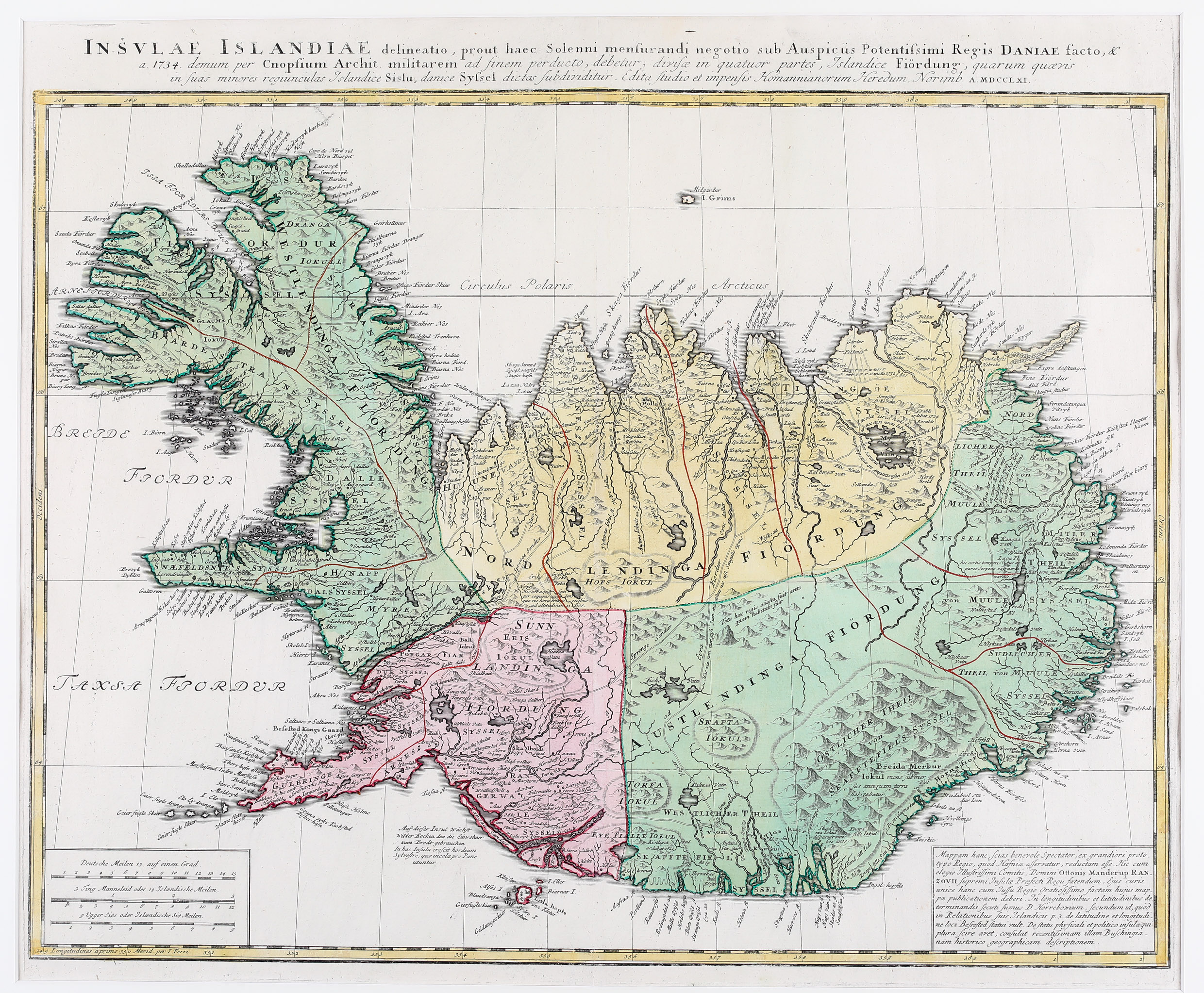 Johann Baptist Homann (1664 – 1724) was the most prominent and prolific map publisher of the 18th century. Born  in Bavaria, as a young man Homann studied in a Jesuit school, and considered the priesthood before converting to Protestantism in 1687. After an employment as a notary in Nuremberg he relocated to Vienna around 1693 where he studied printing and copper plate engraving until 1695. On his return to Nuremberg he worked as an engraver. In 1702, Homann founded the commercial publishing firm that would bear his name and developed his own distinctive style of heavily detailed engraving. It was the beginning of a publishing empire that would continue for the next century and a half. His masterwork „Grosser Atlas über die ganze Welt“, a collection of more than 100 maps, was first published in 1716. The Homann firm, due to the lower cost of printing in Germany, was able to undercut the dominant French and Dutch publishing houses while matching the quality and diversity of their output. By 1715 Homann caught the attention of the Holy Roman Emperor Charles VI who appointed him „Imperial Cartographer“. In the same year he was named a Member of the Prussian Royal Academy of Sciences in Berlin. These positions earned him access to the latest cartographic information and an imperial printing privilege, a proto-copyright that protected his work from being copied by other publishers.

The Homann map of Iceland seems to have been printed as a separate sheet in one edition and never incorporated in one of their atlases.

The history of this attractive and detailed large-scale map of Iceland is long and exciting. Its background is described on islandskort.is as follows:
„In the year 1730 the Norwegian Army Surveyor Thomas Hans Henrik Knoff was sent to Iceland by the Danish Government to continue and to complete the work of Magnus Arason who had been instructed to survey the whole of the country but died before the work was finished. The purpose was to make a precise map of the country once and for all“. Knoff corrected Arnason’s work to some extent and made seven maps of specific districts and an overall map of Iceland which he finished in 1734. As a result of a political dispute which is described on islandskort.is the Danish King decided that the maps should not be displayed or made use of. They were locked and forgotten for many years.

The resurrection of the Knoff map happened in 1752 when Niels Horrebow (1712 – 1760), a well-respected Danish citizen, who had been sent to Iceland by the Danish King in 1749 to conduct an economic and geographical survey, published his book „Tilforladelige efterretinger om Island“. It included a map, engraved by Nicolas Bellin (1703 – 1772), based on Knoff‘s map, which now had been brought out of its „prison“ (for more information on this map and the reason for its jail see Horrebow/Bellin 1764).

When in 1750 Otto Manderup Rantzau became prefect of Iceland his aim was to have the Knoff map published in a better and more accurate version than Horrebow‘s. Therefore he approached the then most distinguished firm of map makers in Europe, Homann Heirs. The map which appeared in 1761 is reduced by more than a half from Knoff’s original. The prodigiously long name in Latin giving details of its origin is placed on top in three lines over the entire width of the map. Thee distance scales are to be found in the lower left corner and in the opposite corner there is rectangle containing text which explains the background of the map and mentions Horrebow and Rantzau.

The country is divided up into four differently coloured regions. The map delineates graphically rivers, lakes, fjords, towns, glaciers and mountains, even tracks for travelling throughout the country. Astonishingly the famous volcano Hekla is depicted insignificantly. The bishopric Holar („Halla“) is marked prominently with a three-tower church, while the other bishopric Skalholt („Skalholds“) is hard to find and pictured with only a two-tower church. 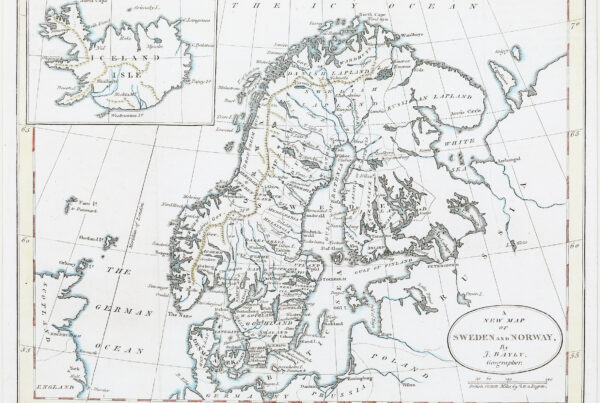