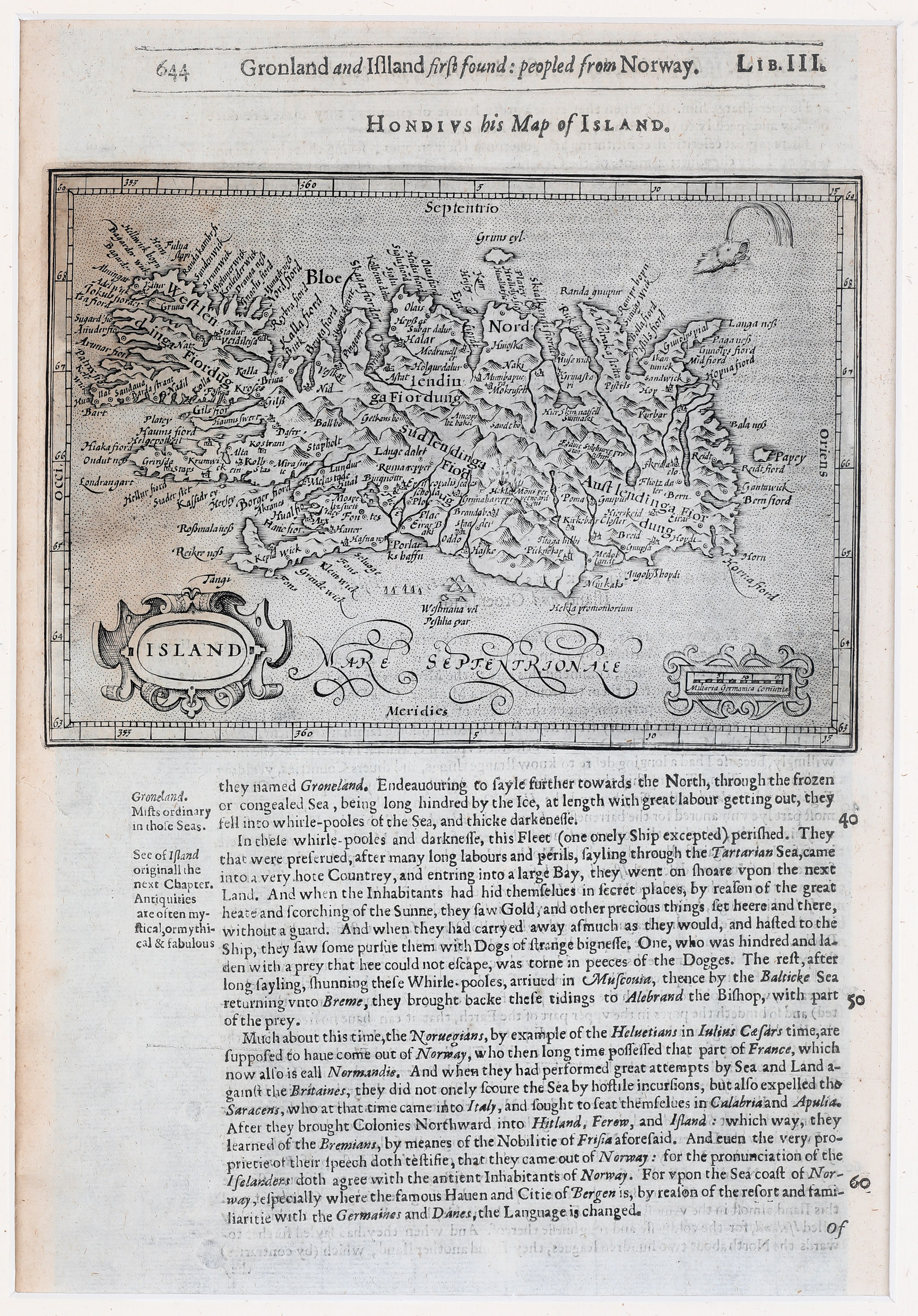 Jodocus Hondius Jr. was a Flemish engraver, cartographer and publisher.
He took over the name from his father who used the latinized version of his Dutch name Joost de Hondt. To distinguish both, they are called „Sr.“ or „Elder“ and „Jr.“ or „II“ respectively in the literature.

Jodocus Hondius the Elder (1553 – 1612) was one of the most notable figures in the Golden Age of Dutch cartography (c. 1570s – 1670s). He grew up in Ghent and already in his early years established himself as an engraver, instrument maker and globe maker. To escape religious difficulties in Flanders, he moved to London in 1584 where he married Colette van den Keere three years later and collaborated with her brother Pieter, also a mapmaker and engraver. In 1593 Hondius moved to Amsterdam. In 1604 he purchased the plates of Gerardus Mercator‘s famous „Atlas“ and republished it with additional maps. Though he used more and more his own plates he gave Mercator full credit as the author of the work, listing himself as the publisher. As the small atlas „Epitome“, published by Ortelius became a big success there was an economical need to produce an easier to handle and cheaper version of the Mercator atlas. Therefore Hondius created the „Atlas Minor“ which was first published in 1607. The plates were later used – with different headings – by Samuel Purchas/Henry Featherstone in 1625 and Michael Sparke/Samuel Cartwright in 1635.

After the death of Jodocus Hondius the Elder, his widow Colette, with seven underage children, carried on running the publishing house using the signboard „de wackere Hond“ (the watching dog). In 1619 she passed the business to their sons Henricus (1587 – 1638) and Jodocus Jr. (1593 – 1629). Following his father‘s footsteps Jodocus Hondius the Younger immediately began to publish under his own name, before opening his own business in „op den Dam“ (Dam Square) in 1621. Even after going separate ways the brothers jointly owned the copper plates for their father‘s globe which they continued publishing together until after 1627. In 1629 Jodocus Hondius II.
set out to publish his own atlas, featuring maps that were not included in the Mercator-Hondius Atlas. This new atlas was in direct competition with his father‘s famed work which was still published by Henricus Hondius‘ publishing house. After the ultimely death of Jodocus Hondius the Younger in 1629 the publisher mark of the watching dog was no longer seen. Finally their brother-in-law, the afterwards well-known Johannes Janssonius (1588 – 1664) took over the plates and his name appears on the „Atlas“ as co-publisher after 1633.

Samuel Purchas was an English cleric and publisher of several volumes of reports by travellers to foreign countries. He has served the Church of England since 1604 as vicar and became chaplain to Archbishop George Abbot in 1614. He did not travel much himself but he recorded personal narratives shared with him by sailors  who returned to England from their voyages. Purchas added these accounts to a vast compilation of unsorted manuscripts, which were left to him by Richard Hakluyt who had died in 1616 and were later published as Purchas‘s third book in 1625 titled: „Hakluytus Posthumus, or Purchas his Pilgrimes“.

Henry Featherstone was a London publisher. He collaborated with Samuel Purchas. Nothing is known about his life.

This very rare sheet is taken from „Hakluytus Posthumus“. The map is the upper half page with text underneath and was originally published in the  Mercator/Hondius „Atlas Minor“ of 1607. The only difference is the headline „Hondius his map of Island“. The map is also identical with the Hondius map in  „Historia Mundi“ published by Michael Sparke/Samuel Cartwright in 1635.

The map is decorated with a strapwork title cartouche („Island“) in the lower left corner and a distance scale cartouche in the lower right corner. The sea is stipple engraved and includes a spouting sea monster. The interior of Iceland is filled with mountains, lakes and numerous place-names amongst them the bishoprics Skalholt which is not named but described „Episcopalis sedes schola“ and „Halar“ (Holar). The text next to the fire-spewing Hekla „Mons perpetuo ardens“ suggests that the volcano was constantly active at the time.