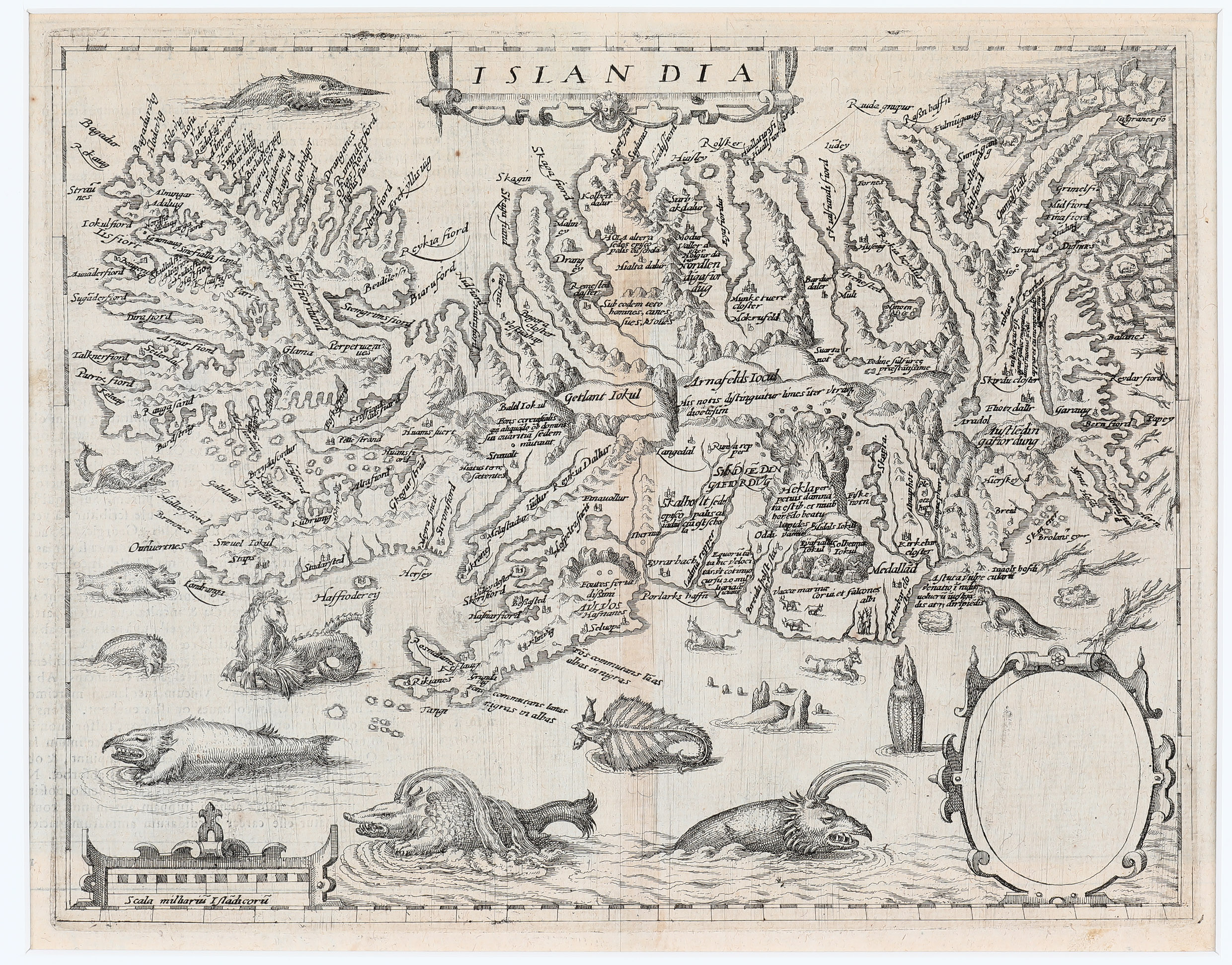 was a German engraver, cartographer and author of historical-geographical writings.
Born in Deventer into a Rhenish noble family, his real name was Matthias Quad von Kinckelbach. After he had learnt the art of engraving in the Netherlands, he collaborated with a well-known publisher in Cologne, Johann Bussemacher (worked between 1580 and 1613) to publish a quarto atlas of „Europe“ („Europae totius terrarum orbis partis praestantissimae, generalis et particularis descriptio“) in 1592. This work was expanded into a „Geographisches Handtbuch“ (1600) with more texts than maps, and then into a proper atlas „Fasciculus Geographicus“ (1608). All three were small in size, allowing them to compete as cheaper alternatives to the larger atlases of Ortelius and Mercator.

In Quad‘s first two works maps of Iceland are to be found which differ slightly  according to Halldor Hermansson, The Two Cartographers, Copenhagen 1927.

The title cartouche is centred at the top. In the lower right corner is an empty vignette and in the lower left corner is a decorative distance scale. The map illustrates a remarkable array of the legendary and mythical sea monsters of the 15th and 16th century as sea horse, manta ray, walrus and whale but one of Ortelius‘ sea monsters is gone. Along part of northeastern coastline, polar bears can be seen on floating icebergs.

Iceland is depicted in remarkable detail, including its mountains, fjords and glaciers.
Mount Hekla is erupting in a fiery explosion of flames and volcanic material. The text is the name as on the Orlelius map: „Hekla perpetuis damnata estib. et niuib. horrendo boatu lapides evomit“ (Hekla, perpetually condemned to storms and snow, vomits stones under terrible noise). There are over 200 place-names, including the bishoprics Skalholt and Holar, but fewer than in the cartographic model.

Between this map from „Europe“ (1592) and  the one in „Geographisches Handtbuch“ (1600) are two important differences which are described by Halldor Hermannsson, Two Cartographers, Copenhagen 1927: „In the first it is found in an elementary state, without indications of longitude or latitude, and with an oval in the lower right corner empty; the text in the back is in Latin. The other has the longitude and latitude added, and the oval space occupied by King Christian IV of Denmark; text is in German“.
The former Director of the National and University Library of Iceland („Landsbokasafn“), Haraldur Sigurdsson, writes in his two-volume monograph „Kortasaga Islands“, Reykjavik 1971 (translated from Icelandic language): „Halldor Hermannsson mentions that there is a rare edition of Quad‘s map of Iceland“ and cites his findings but Haraldur Sigurdsson states that he has never seen this map in his life. This fact documents the extrem rarity if not uniqueness of this map.

During an exciting family trip driving the famous Route 66 in the USA in July 2016.
I discovered this map on the Website of Libreria Antiquaria Perini in Verona, Italy. At once I recognized the empty cartouche and was aware of the extreme rarity of this map. Therefore I sent an email to the owner Marcus Perini showing strong interest in the acquisition of the map and asking him about the background of the missing Christian IV. He wrote back that he found out that the map is rare. He supposed that either it is an early stage of the map or the picture has been removed after the King’s death. Marcus Perini was fair enough not to increase the price and now the Akureyri Museum can be proud to own this map.