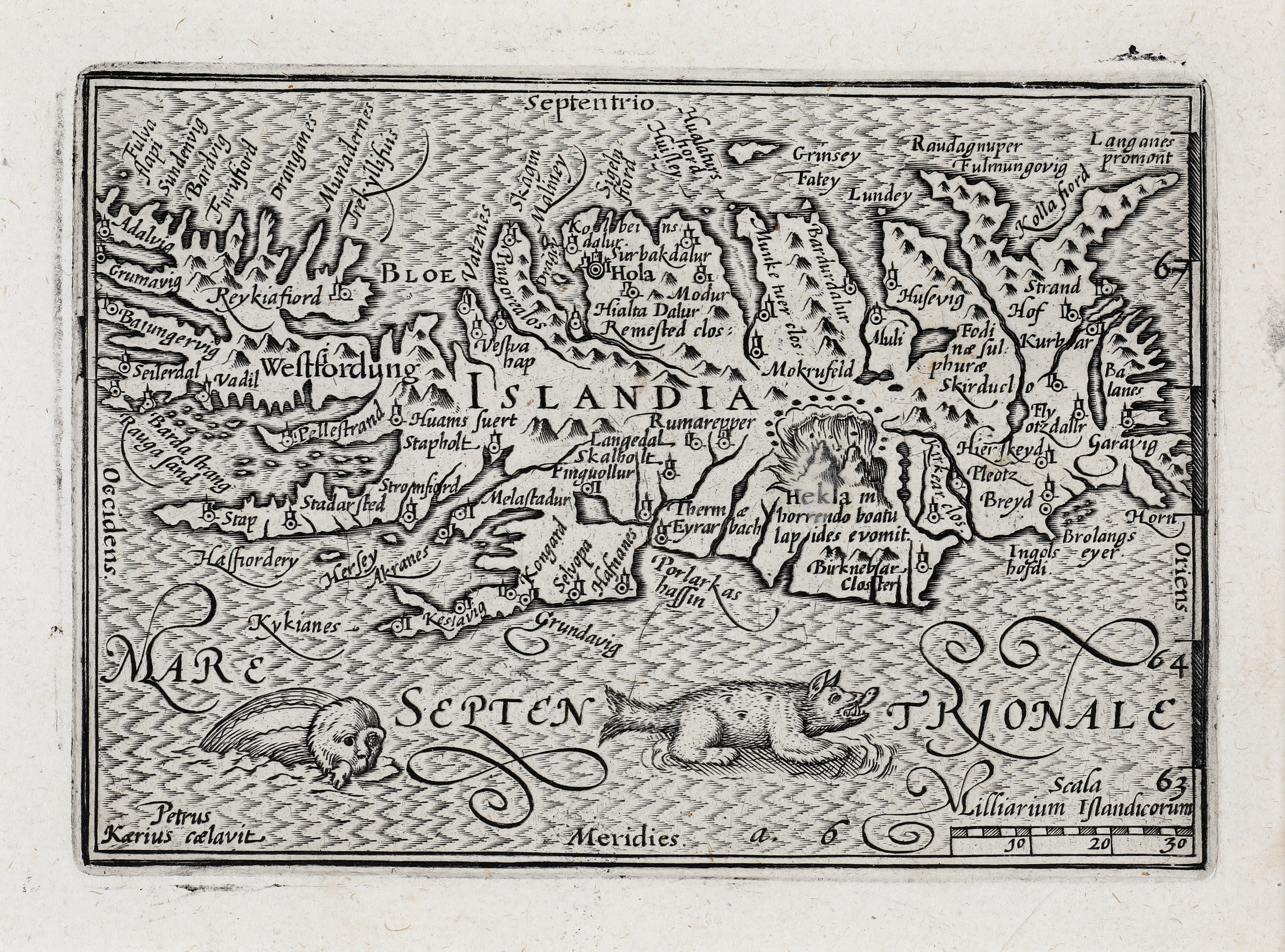 Petrus Kaerius, the latinized version of his Dutch name Pieter van den Keere, was an engraver, publisher and globe maker. Born in Ghent, he emigrated in 1583/84 with his family for religious reasons to London. Three years later his sister Colette married Jodocus Hondius and from him, Pieter received training as an engraver. In 1593 both settled in Amsterdam where Pieter worked for different cartographers.

Cleas Janszoon Visscher, also known as Nicolas Joannes Piscator, was a Dutch draughtsman, engraver, mapmaker and publisher. Born in Amsterdam, he learnt the art of printing from his father and helped to grow the family printing and mapmaking business to one of the largest in his time.

This very rare miniature map  is based on Abraham Ortelius‘ classic map of 1590.
The title of the map „Islandia“ is to be found in the center. There is a distance scale in the bottom right corner. The sea is hatched and two monsters are swimming in the ocean. The map has nearly 80 place-names, many of them with church symbols, including the bishoprics Skalholt and Holar; the latter is highlighted. Hekla is seen erupting, accompanied by the text „Hekla in horrendo boatu lapides evomit“ (Hekla vomits stones with terrible noise). No glaciers are depicted or named.In the bottom left corner is an inscription that says „Petrus Kaerius caelavit“ (which means „has engraved“).

The map is very similar to the map of 1598 which is attributed to Pieter van den Keere & Barent Langenes & Cornelis Claesz. This map has no headline „Descriptio Islandiae“ but the lettering „a.6“ is added at the bottom.

A very rare and attractive miniature map of Iceland engraved by Petrus Kaerius, about 1598 an re-issued in a little-known edition by Visscher 50 years later. This plate was published in 1649 when it was introduced in „Tabularum Geographicarum Contractarum“, a compilation of maps mainly engraved at the turn of the century but including some old, but previously unpublished plates. Now very rare, the atlas known complete in only a small handful of copies, perhaps only two, the individual maps are very scarce. This is a fine example of a distinctively engraved little map of the island with huge sea monsters, the volcano of Mount Hekla and the mountainous nature very apparent. The plate bears the signature of Kaerius and the lettering „a.6“ distinguishing it from earlier examples.

The map is very similar to the map of 1598 which is attributed to Pieter van den Keere & Barent Langenes & Cornelis Claesz. This map has no headline „Descriptio Islandiae“ but the lettering „a.6“ is added at the bottom.