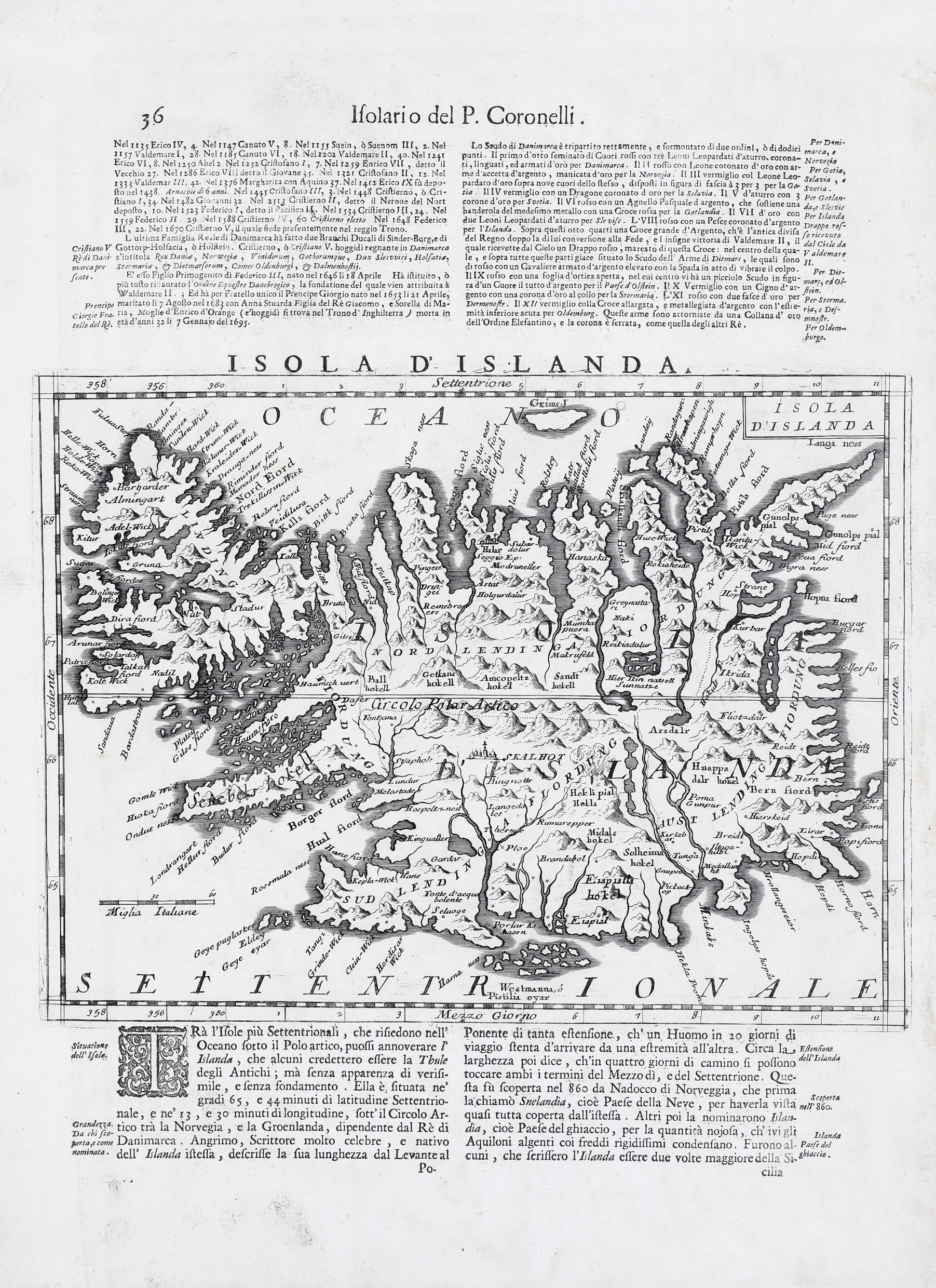 was one of the best-known and most productive cartographers in Italy at the end of the 17th and the beginning of the 18th century, especially for his globes and atlases. He earned a doctorate in theology but also studied astronomy and geography. By the late 1670s the Duke of Parma commissioned him to create a set of globes, five feet in diameter. For an even bigger commission from Louis XIV of France he moved to Paris for two years to construct the King‘s huge globes which are 12,5 feet in diameter and weigh two tons. Once he came back to Italy, in 1685, Coronelli founded the worldwide first geographical society, the „Academia Cartographica degli Argonauti“, and became Cosmographer of the Venetian Republic. As a mapmaker, his most famous works are the „Atlante Veneto“ (Venetian Atlas), published between 1691 and 1701, the „Corso Geografico Universale“ (Geographical Course of the World) in 1692/94, the „Libro dei Globi“ (Book of Globes“) in 1693 and the „Isolario dell‘ Atlante Veneto“  (Island Book of the Venetian Atlas) in 1696/97.

Two similar maps, both reduced copies of the Joris Carolus map of 1641, are to be found in two states, with and without the title in the upper right corner. This is sheet 36 in the „Atlante Veneto“ with the headline „Isolario del P. Coronelli.“ The text is in Italian language  and the map is placed between the text. In the upper part, Iceland is only mentioned once but underneath the map the description of „Islanda“ starts and continues on the back side of the sheet.

„Place-names are considerably fewer than on the original, or just short of 200. Some of them have been badly distorted in the hands of the author or his engravers“ (islandskort.is). New information about the country is lacking but there are still interesting details. A distance scale „Miglia Italiane“, the „Circolo Polar Artico“ (running too far south), the bishoprics Skalholt („Skalhot“) and Holar („Halar“), the erupting Hekla („Hekli pial Hekla“) and surprisingly many named glaciers („Hokel“).