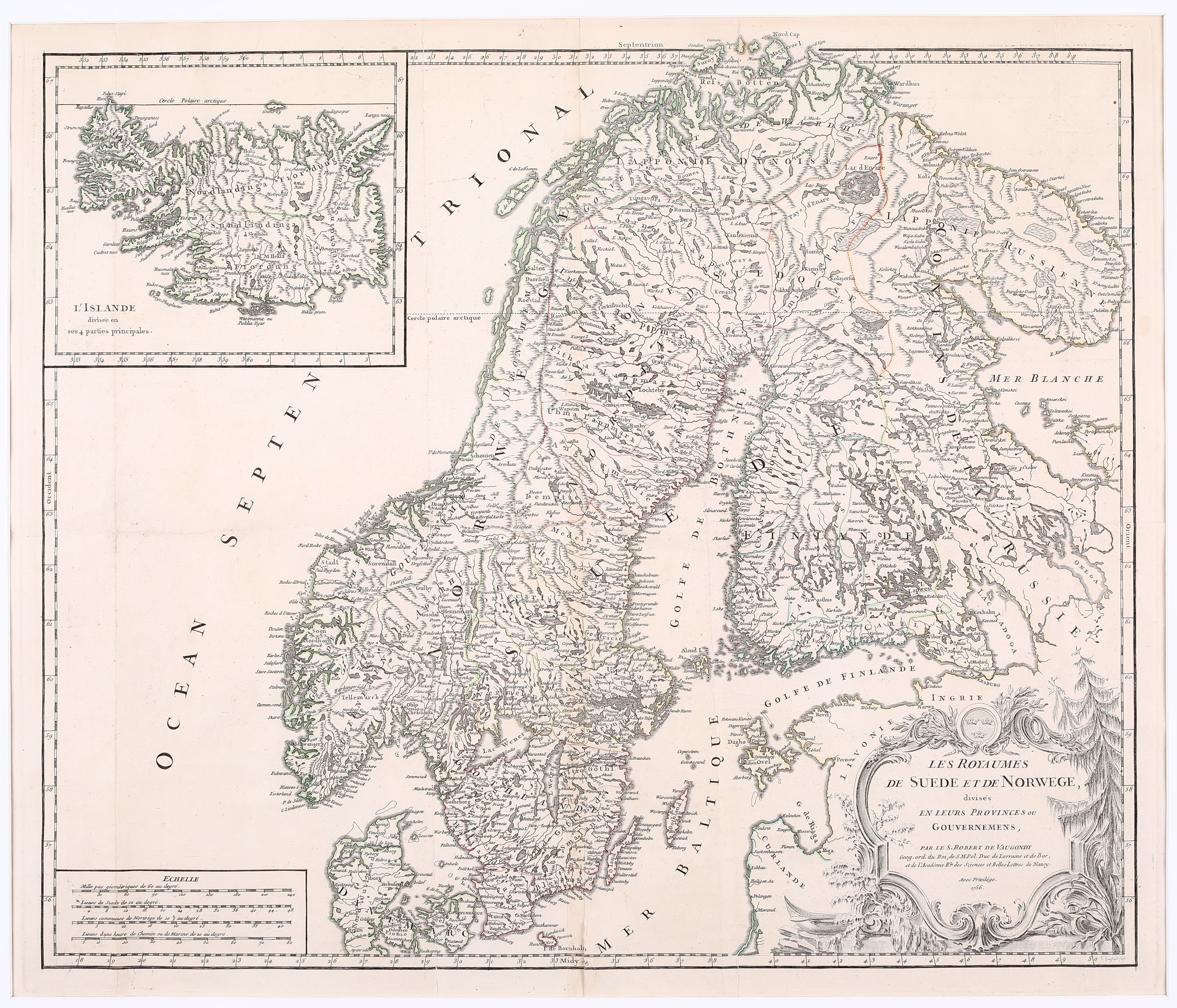 were leading French  publishers, cartographers and engravers active in Paris during the mid-eighteenth century who worked together as father and son. Their best-known work is the „Atlas Universel“ (1757) which took over 15 years to create and was released in a folio and a 3/4 folio edition. They were inheritors to the important cartographic firm of Nicolas Sanson whose stock applied much of their initial material. Soon they produced their own substantial corpus of work. The Vaugondys were well respected for the detail and accuracy of their maps. Unlike many competitors of this period who published „speculative cartography“ without significant research, the Vaugondys compiled each map based upon their superior geographic knowledge, literature study, the journals of contemporary explorers and missionaries as well as direct astronomical observation. Gilles served as a geographer to the French King Louis XV and later his son Didier Robert took over this prestigious position.

This beautiful map of has a decorative title cartouche in the lower right corner. It covers Scandinavia, the Baltic, a part of Russia and includes an inset map of Iceland in the top left quadrant. The map was produced in 1756 and published in Vaugondy‘s „Atlas Universel“ one year later. There are several versions of this map; three are to be found in the „Schulte Collection“. What they have in common is the naming of the author: „Par le Sr. Robert de Vaugondy“. The variations can be attributed to the existence of the text, the mentioning of „Avec Privilege.“ and the year underneath the name. This map fulfills all the defined characteristics.

All three maps also differentiate in shape and depiction detail of the inset maps of Iceland. Two maps are the Knoff type, one is the Sanson type. This one is the Sanson type. Information is very detailed. In the lower left corner is the title of the inset map: „L‘ Islande divisee en ses 4 parties principales“ and underneath: „Par le Sr. Robert de Vaugondy“. Iceland is divided into four parts („Fjordum“) and numerous mountains, lakes, rivers, fjords, roads and settlements are depicted, including an erupting Hekla. The bishoprics Skalholt and Holar are written in larger lettering. The map is highly accurate for the period and most contemporary names are correct, though historic names are, in many cases incorrect or are omitted. Astonishingly the Arctic Circle is drawn near to perfection. Is runs correctly through Grimsey; only the northernmost tip of the westfjords is more south in reality.