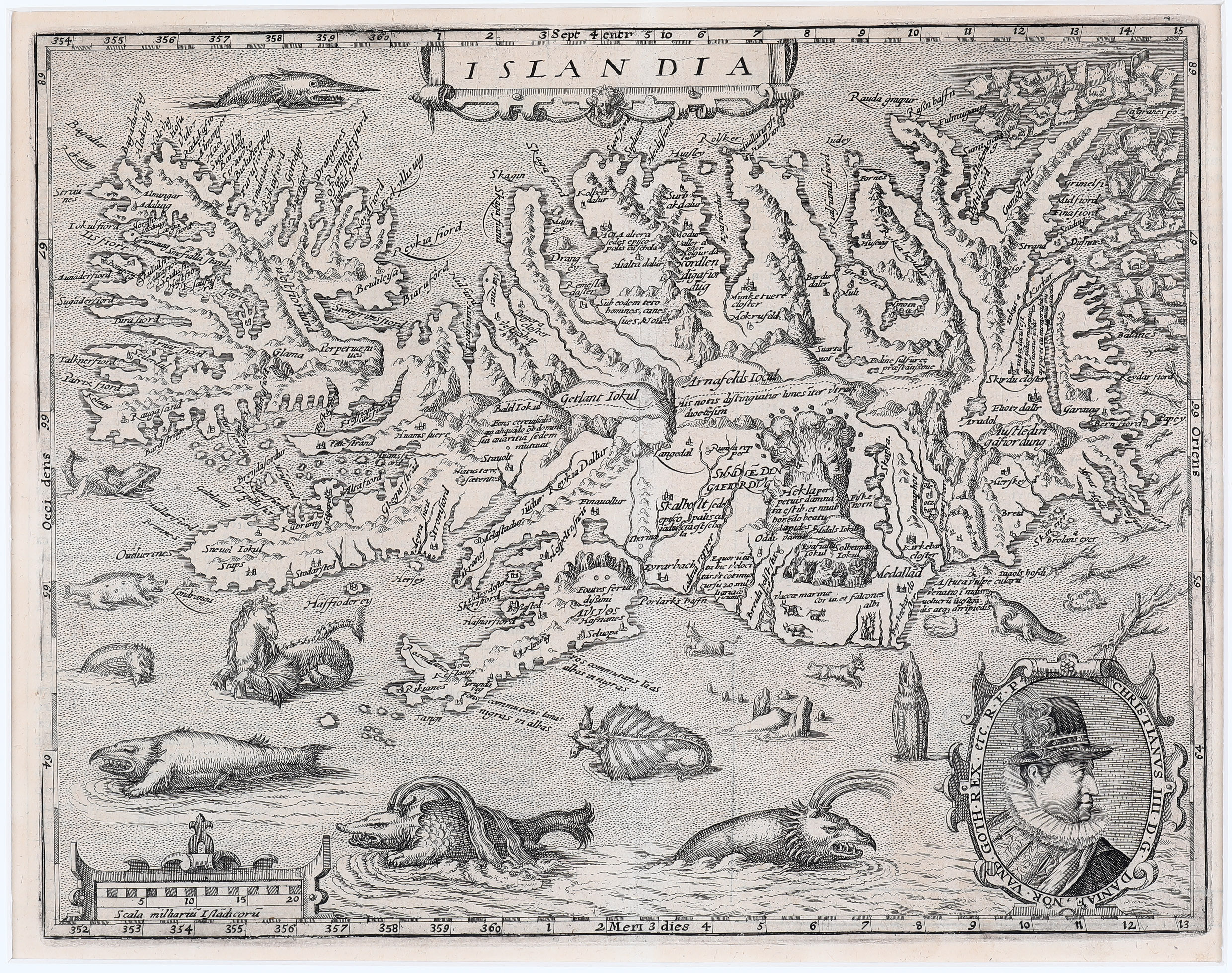 was a German engraver, cartographer and author of historical-geographical writings.
Born in Deventer into a Rhenish noble family, his real name was Matthias Quad von Kinckelbach. After he had learnt the art of engraving in the Netherlands, he collaborated with a well-known publisher in Cologne, Johann Bussemacher (worked between 1580 and 1613) to publish a quarto atlas of „Europe“ („Europae totius terrarum orbis partis praestantissimae, generalis et particularis descriptio“) in 1592.This work was expanded into a „Geographisches Handtbuch“ (1600), with more texts than maps, and then into a proper atlas „Fasciculus Geographicus“ (1608). All three were small in size, allowing them to compete as cheaper alternatives to the larger atlases of Ortelius and Mercator.
In Quad‘s first two works maps of Iceland are to be found which differ slightly according to Halldor Hermansson, The Two Cartographers, Copenhagen 1927.

This decorative and scarce map appeared in „Geographisch Handtbuch“ (1600) and like the map in „Europe“ (1592) it is a copy, reduced in size, of Ortelius’ classic map of Iceland of 1585.

The title cartouche is centred at the top. In the lower right corner is a vignette portrait of Christian IV, King of Denmark and Norway and on the margins indications of longitude and latitude (both details are missing in the map of 1592). In the lower left corner is a decorative distance scale. The map illustrates a remarkable array of the legendary and mythical sea monsters of the 15th and 16th century as sea horse, manta ray, walrus and whale but one of Ortelius‘ sea monsters is gone. Along part of the northeastern coastline, polar bears can be seen floating on icebergs.

Iceland  is depicted in remarkable detail, including its mountains, fjords and glaciers. Mount Hekla is erupting in a fiery explosion of flames and volcanic material. The  text is the same as on the Ortelius map: „Hekla perpetuis damnata estib. et niuib. horrendo boatu lapides evomit“ (Hekla, perpetually condemned to storms and snow, vomits stones under terrible noise).There are over 200 place-names, including the bishoprics Skalholt and Holar,but fewer than in the cartographic model.

The differences between this map of 1600 and the earlier map which was published in „Europe“ (1592) are described there, including the exciting hstory.