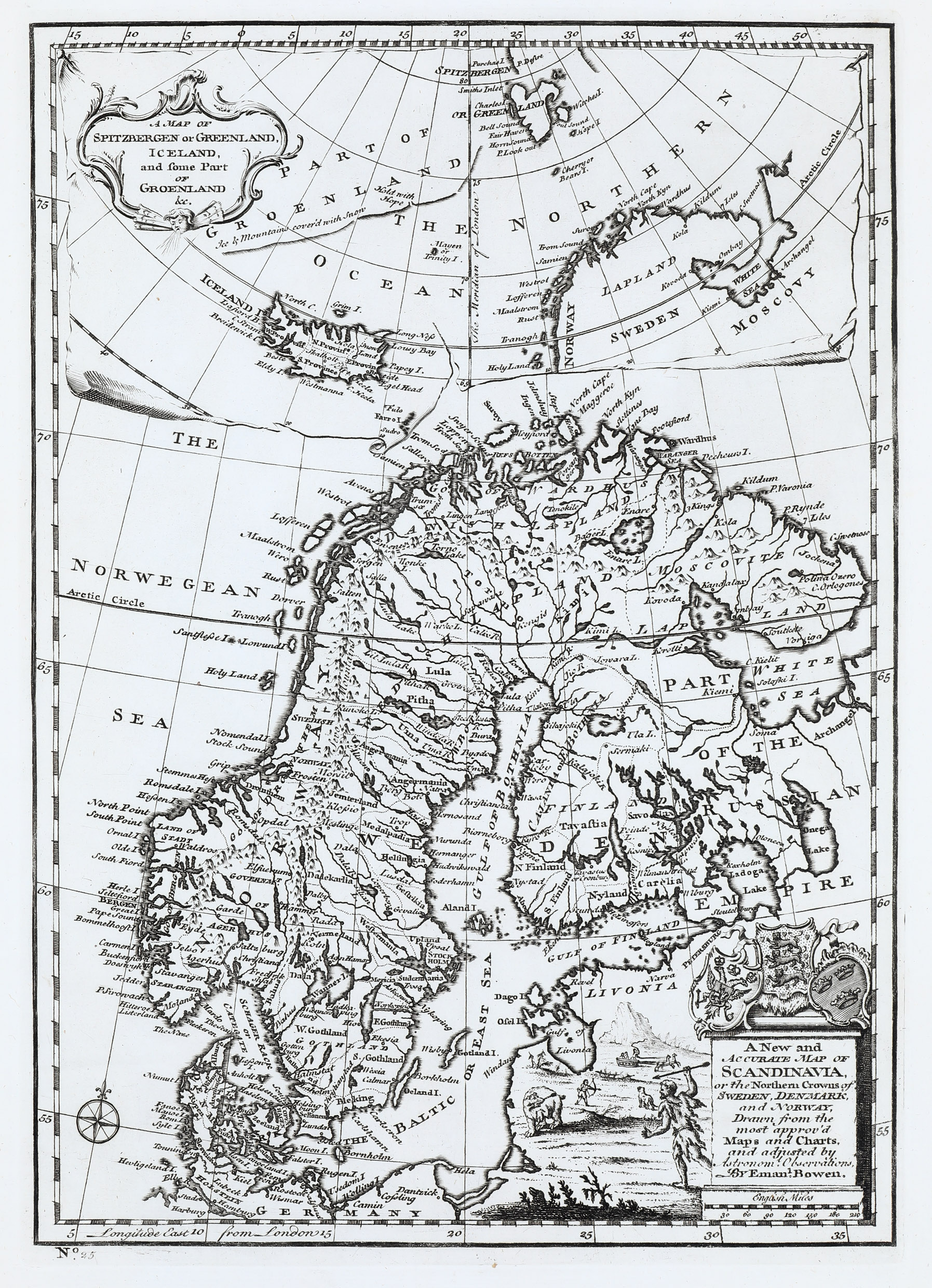 91. Map of Spitzbergen or Greenland, Iceland and some part of Groenland & c.

was a map and print seller who worked in London from about 1794  where he produced some of the best and attractive maps of the 18th century. Bowen was engraver to both King George II of England and Louis XV of France.
One of his earliest engraved works „Britannia Depicta“, published in 1720 contained over two hundred road maps together with a miniature map of each of the counties of England and Wales. It was an unusual feature of the atlas that the maps were engraved on both sides of each page, and this resulted in a handier sized book. Other famous works are „A Complete System of Geography“ (1744 – 1747), „The Large English Atlas“ with Thomas Kitchin (1755 – 1760) and „Atlas Minimus“ with John Gibson (1758). Despite of his renown and success Emanuel Bowen died in poverty, like many cartographers. His cartographical work was taken over by his son Thomas who suffered the same fate.

This unusual map is from the 1747 issue of „A Complete System of Geography“.
It has two pictoresque title cartouches: one in the lower right corner (with a distance scale underneath) topped by coats of arms of Sweden, Denmark and Norway and another one in the top upper left corner.

The main map covers Scandinavia, the Baltic, „Parts of the Russian Empire“ and northern Germany. There are a lot of place-names but also beautifully illustrated hunting scenes in the bottom right quadrant. Of particular interest is the legendary „Maalstrom“ near the Lofoten („Lofferen“) in northwestern Norway which was the inspiration for Edgar Allen Poe‘s classic short story „Descent into the Maelstrom“. In reality it is a periodic and powerful current caused by tidal variations in the region.

The upper map which is not drawn to scale is depicted like rolling up a map. It covers Iceland and the Faroe Islands, but the other islands are named strangely. „Part of Groenland“ is only the southwestern coastline of Greenland with vague illustration which only identifies Cape Hold-with-Hope and the rest of Greenland‘s east coast as „Ice and mountains covered with snow“ though the coasts of Greenland were quite well-known at the time. Furthermore  there are some islands with „or“ names: „Mayen or Trinity I.“, „Cherry or Bears I.“ and „Spitzbergen or Greenland“, with a little island north of it named „Purchas I.“,  obviously to honour Samuel Purchas, the publisher of „Purchas his Pilgrimage …“ in 1614.

Iceland is shown divided in its four provinces, with only three place-names: the volcano Hekla and the bishoprics Skalholt and Holar without any illustration. The Arctic Circle is marked too far south crossing the peninsulas in northern Iceland.