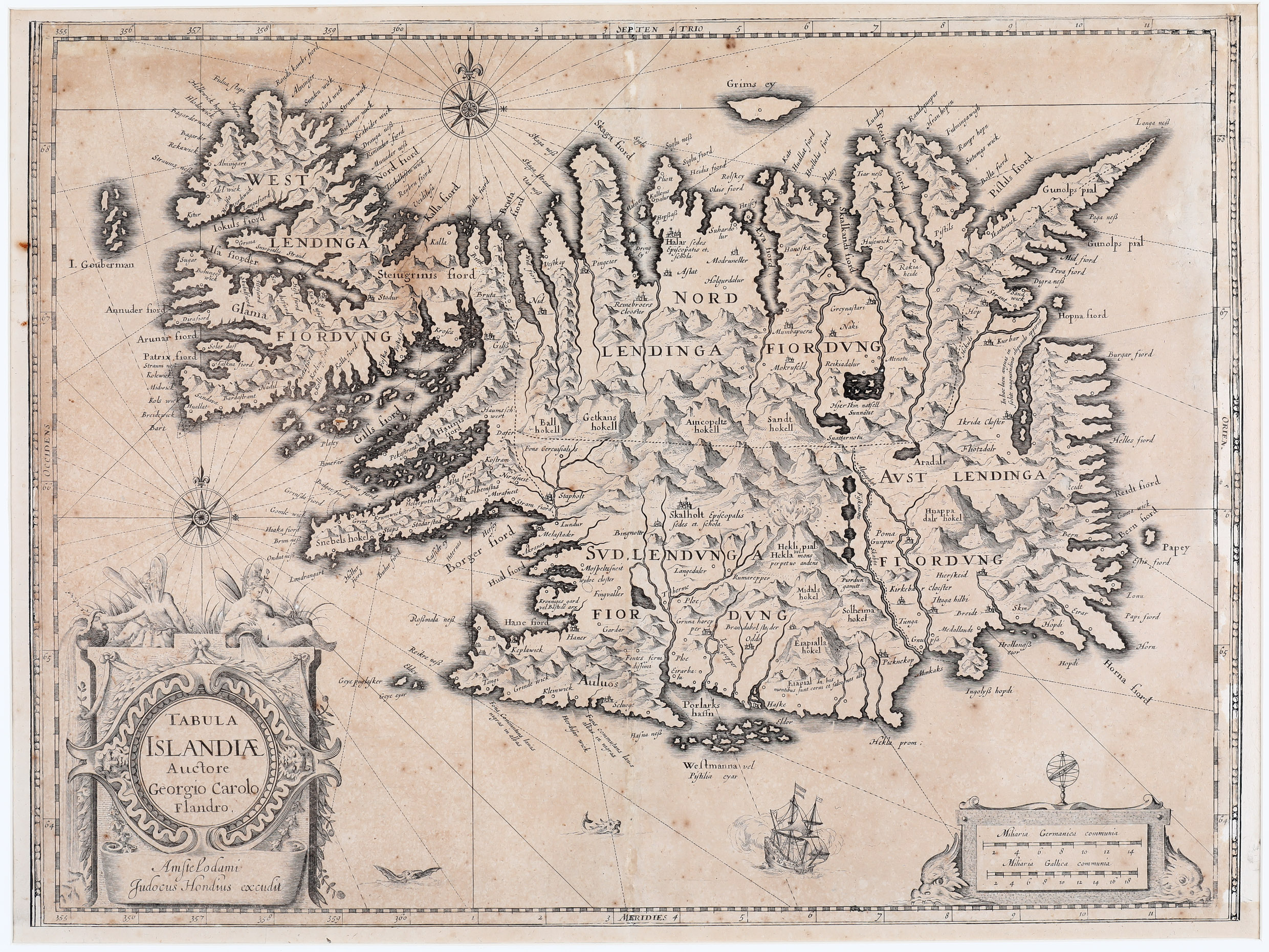 Joris Carolus, apparently a native of Enkhuizen, lost a leg in the „Siege of Ostend“ at the beginning of the 17th century. After that he turned to the art of navigation and became a „Stierman“ (pilot) for the whaling company „Noordsche Compagnie“. He claimed to have reached 83 degrees N and definitely reached the islands of Jan Mayen and Spitsbergen, the Davis Strait region and Baffin Bay. He even spent some time in Iceland. After his retirement he settled in Amsterdam as a teacher of navigation and became a cartographer.

Jodocus Hondius Jr. was a Flemish engraver, cartographer and publisher. He took over the name from his father who used the latinized version of his Dutch name Joost de Hondt. To distinguish both, they are called „Sr.“ or „Elder“ and „Jr.“ or „II.“ respectvely in the literature.

Jodocus Hondius the Elder (1553 – 1612) was one of the most notable figures in the Golden Age of Dutch cartography (c. 1570s – c. 1670). He grew up in Ghent and already in his early years established himself as an engraver, instrument maker and globe maker. To escape religious difficulties in Flanders, he moved to London in 1584 where he married Colette van den Keere three years later and collaborated with her brother Pieter, also a mapmaker and engraver. In 1593 Hondius moved to Amsterdam. In 1604 he purchased the plates of Gerardus Mercator‘s famous „Atlas“ and republished it with additional maps. Though he used more and more his own plates he gave Mercator full credit as the author of the work, listing himself as the publisher. As the small atlas „Epitome“, published by Ortelius became a big success there was an economical need to produce an easier to handle and cheaper version of the Mercator atlas. Therefore Hondius created the „Atlas minor“ which was first published in 1607. The plates were later used – with different headings – by Samuel Purchas/Henry Featherstone in 1625 and Michael Sparke/Samuel Cartwright in 1635.

After the death of Jodocus Hondius the Elder, his widow Colette, with seven underage children, carried on running the publishing house and in 1619 she passed the business to their sons Henricus (1587 – 1638) and Jodocus Jr. (1593 – 1629). Following his father’s footsteps Jodocus Hondius the Younger immediately began to publish under his own name, before opening his own business in „op den Dam“ (Dam Square) in 1621. Even after going separate ways the brothers jointly owned the copper plates of their father’s globe which they continued publishing together until after 1627. In 1629 Jodocus Hondius II. set out to publish his own atlas, featuring maps that were not included in the Mercator-Hondius Atlas. The new atlas was in direct competition with his father’s famed work which was still published by Henricus Hondius‘ publishing house. After the death of Jodocus Hondius Jr. his widow sold the plates to his great competitor Willem Janszoon Blaeu and finally they ended up in the hands of Henricus Hondius and Johannes Janssonius. Both used the plate of the map of Iceland and just changed the title cartouche; both maps are to be found in the Schulte Collection.

This stunning map of Iceland was drawn by Joris Carolus and engraved by Jodocus Hondius Jr. who seems to have produced the map for individual sale or for binding several maps up in „ad hoc collections“. As this map is back in verso, it is likely that it was issued separately.

It is slightly bigger than the famous maps of Abraham Ortelius 1585 and Gerardus Mercator 1595. „On the map the length of Iceland is much the same as on Mercator‘s map, but the breadth is rather less, so that the proportion is nearer to the true one. The map shows the influence on both versions of bishop Gudbrandur‘s map. The coastline resembles more Ortelius, but when it comes to place the map follows Mercator in selection and spelling. In spite of many errors, some of them serious, the map is a step in the right direction“ (islandskort.is).

The ornamental title cartouche features two winged sprites, an important symbol of the Icelandic and Norse mythodology. It includes the name „Auctore Giorgio Carolo Flandro“, the place-name „Amstelodami“ and the publisher „Judocus Hondius excudit“.
(I wondered why Jodocus has written Judocus but could not find an answer in the literature.) Furthermore, the map is richly embellished with a distance scale cartouche, compass roses, rhumb lines, a sailing ship, two sea monsters, animals and a breathtaking scene of an erupting vulcano with the text: „Hekla mons perpetuo ardens“ which suggests that the volcano was constantly active at the time. The island‘s topography with mountain chains, rivers, lakes, glaciers and settlements is beautifully depicted. There are many place-names including the bishoprics Skalholt and Holar („Halar“), each with the text „Episcopalis sedes et. schola“.

Compared with the Ortelius and Mercator maps of Iceland improvements are hardly to be discovered but there are some errors, for example the „I. Gouberman“ near to the Westfjords actually not exists.

In the nineties I received an auction catalogue from a German antiquarian but obviously the mail had needed weeks to reach me. The auction was already over.
Nevertheless I looked through the text and discovered „Tabula Islandiae Auctore Giorgio Carolo Flandro“. I thought: „we already have a copy“ and intended to put the catalogue aside. But spontaneously I followed my instinct as a collector to have a look at the photo of the map in the appendix and saw „Judocus Hondius excudit“. I was excited because I knew this map is extremely rare. But the auction was over! A few moments I felt desperately but my brain said: „how can I get this map?“ So I wrote a letter to the antiquarian, told him about the delay in mailing, about my passion for old maps of Iceland and asked him to inform me on the name of the buyer, if he is an antiquarian. I could not believe the answer: „the item has not been sold!“ He offered the map with a discount off the minimum sale price which was oriented at the value of the „normal“ version of a Carolus map of Iceland. Of course I agreed and when the parcel arrived my wife and I opened a bottle of sparkling wine from Johannisberg where we live. What an exciting story!

Years later, I have found the information that Oswald Dreyer-Eimcke, Honorary President of the „Society of Friends of Iceland“ and owner of an important collection of Iceland maps, a publisher of several books and articles on this subject and former President of the IMCOS International Map Collectors Society has been asked by a collector about this map. His answer was: „I have heard about this map but I never saw it.“

Moreover, Haraldur Sigurdsson, main expert of Iceland maps and author of the two- volume „Kortasaga Islands“ only knows about it this map but it is not in „Landsbokasafn“ (National Library of Iceland).