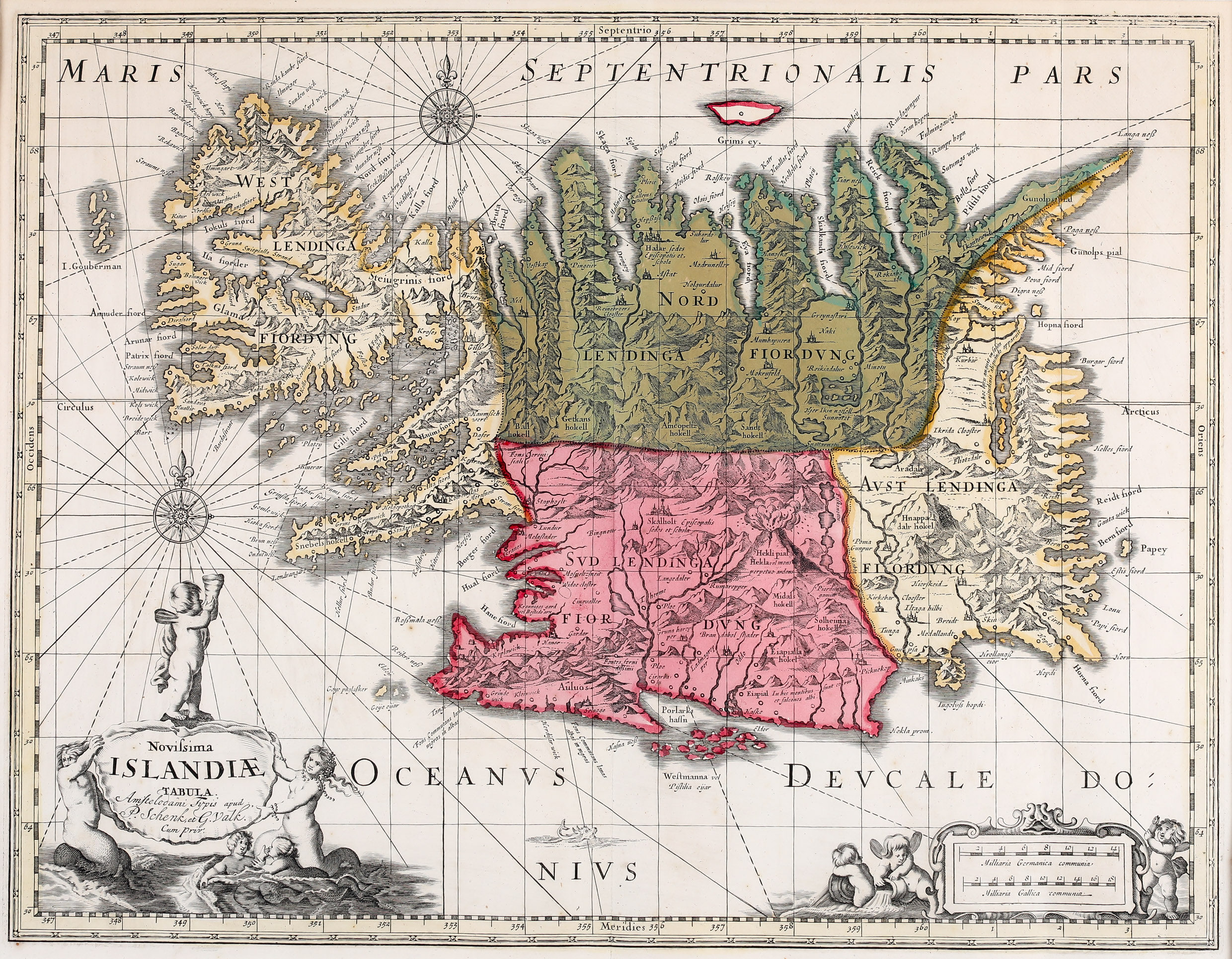 Peter Schenk the Elder was born in Elberfeld in Germany. In 1684 he moved to Amsterdam and became a student of Gerard Valk from whom he learnt the art of mezzotint. In 1687 he married Valk‘s sister and developed a close relationship with her father. In 1694, together with his brother-in-law, Schenk acquired all the plates of the Janssonius Heirs’ „Novus Atlas“. This deal allowed them to specialise in the engraving and publishing of maps. Many of Janssonius Heirs’ plates were reworked and amended. Around 1700 Schenk published his „Atlas Contractus sive mapparum geographicarum“ in which he used maps from several mapmakers, amongst them Janssonius, Sanson, Valk and himself. Schenk had three sons who carried on their father‘s business after his death.

Gerard Valk, or Gerrit Leendertsz Valck, was born in Amsterdam. In 1672 he moved to London and learnt the arts of mezzotint and engraving. In 1687 he moved back to Amsterdam and established a firm which published maps and atlases but in 1700 the company moved the shop to the building previously occupied by map and globe-maker Jodocus Hondius. Valk became the only significant publisher of globes in the Netherlands in the eighteenth century, enjoying an almost total monopoly in the first half of the 1700s. In 1711, when Gerard became a member of the prestigious
bookseller‘s guild, his son Leonardus came into partnership  and he took over the business after the death of his father who died in relative poverty.

There are many maps published by Schenk & Valk. Most of them are to find in the „Atlas Contractus sive Mapparum Geographicarum Sansonarium auctarum et correctarum Nova Congeries“ around 1700.

This very rare map is originally based on the map by Joris Carolus of c. 1630. The plate passed to Johannes Janssonius and later was for some time owned by Moses Pitt who reworked it and published his map of Iceland c. 1680. After his death it found its way to Carel Allard in the Netherlands from whom it passed to Petrus Schenk and Gerald Valk who reworked the map again. They only changed the title cartouche which now bears the inscription: „Amstelodami Typis apud P. Schenk, et G. Valk. Cum Priv.“ The ornamental title cartouche is decorated by putti and mermaids as well as the distance scale cartouche. The map is also embellished with two compass roses, rhumb lines and a little sea monster.

The topography of Iceland with mountains chains. rivers, lakes, glaciers and settlements is beautifully depicted. There are many place-names including the bishoprics Skalholt and Holar („Halar“), each with the text: „Episcopalis sedes et. schola“. Particularly striking is the scene of an erupting volcano with the text: „Hekla  vel mons perpetuo ardens“ which suggests that the volcano was constantly active at the time. As on earlier maps the „I. Gouberman“ near to the Westfjords actually not exist.
.

My wife Gisela was born in the same town as Petrus Schenk which makes this map very special for her. Elberfeld is now a suburb of Wuppertal, a city in North Rhine-Westphalia, in and around the Wupper Valley, famous for its unique suspension railway („Schwebebahn“).