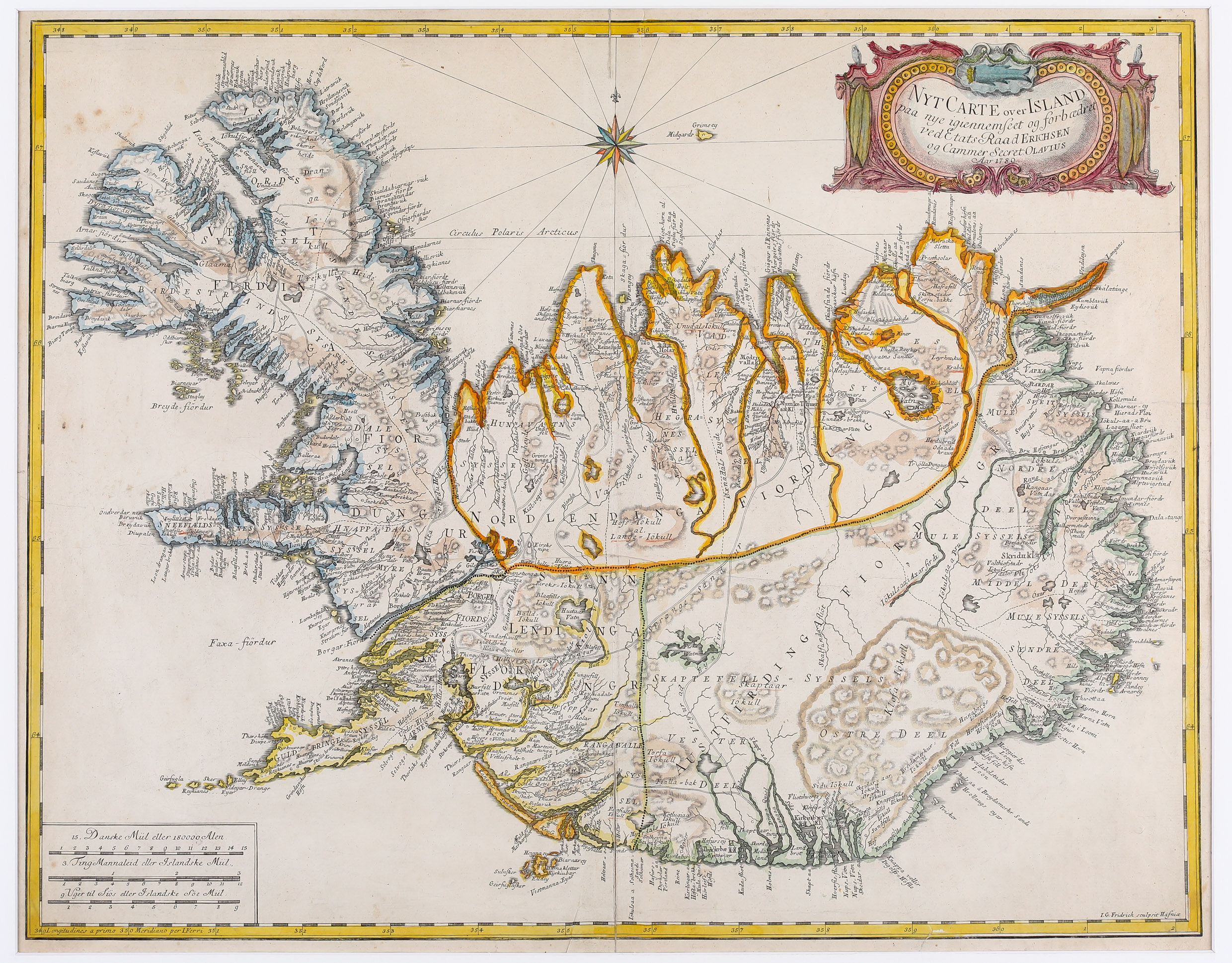 Jon Eiriksson or Eriksson or Erichsen (1728 – 1787) was an Icelandic lawyer and judge. Nothing more is to be found about his life.

Gerhard Schoening or Schoenning (1722 – 1780), born in Lofoten, was a Norwegian historian and studied theology at the University of Copenhagen. 1750 he was appointed rector at Trondheim Cathedral School and in 1765 Professor of Rhetoric and History at the Soroe Academy, one of the oldest schools in Denmark. Schoening published intensively. His main work is about the History of the Kingdom of Norway.

Both persons were selected by the Royal Academy of Sciences for a special task. The background is as follows. „In 1752 two Icelanders Eggert Olafsson and Bjarni Palsson were sent to Iceland from Copenhagen to carry out a scientific reconnaissance of the country. They pursued their researches for the next six summers until 1757. It was Eggert‘s role to record the results but he was drowned in Breidarfjördur before the book could be printed, so others had to see to its publication. Two excellent men were selected for the task, Jon Eiriksson and Gerhard Schoening“ (islandskort.is).
Eggert Olafsson and Bjarni Palsson published a book about their scientific and cultural survey, accompanied by a map from Eiriksson & Schoening, first in 1772 in Danish language, later in German, French, English and Icelandic.

In 1776 the Danish Government initiated a scientific expedition to Iceland, with a view
to exploring especially the economic aspects like fishing and harbour building
which had been neglected by Eggert Olafsson and Bjarni Palsson.

Olafur Olafsson (1741 – 1788), latinized name Olavius, was the expedition leader.
He was born in Eyri at Seydisfjördur, attended Skalholtsskoli and then studied medicine with Bjarni Palsson, the Icelandic Director of Health. Later Olafur went to Denmark to study philosophy at the University of Copenhagen. In 1770, he wrote a book about how to grow vegetables. He became a „free thinker“ and founded an printing company, which published independent from religious constraints, on the island of Hrappsey at Hvammsfjördur. Olafur was also one of the founders of „Hid islenska Laerdomslistafelag“ which was the frontrunner of the Icelandic Literary Society.
By the way, his sister Ingibjörg became the grandmother of Jon Sigurdsson, the leader of the 19th century Icelandic Independence Movement.

After the Danish government had sent him to Iceland, Olafur travelled all over the country for three summers from 1772 to 1775. He wrote down his observations in the work „Ökonomisk Reise igiennem de nordvestlige, nordlige og nordostlige Kanter af Island“, published in 1780, and it was accompanied by this map of Iceland, done by Jon Eiriksson and Gerhard Schoening. The book was published also in German, titled „Ökonomische Reise durch Island in den Nordwestlichen und Nordöstlichen Gegenden“ in 1787 and 1805 with an unchanged map.

The source is Homann’s map of 1761 which in turn was based on the map by Thomas Hans Henrik Knoff from 1734. „The location of the country and the coastlines are for the most parts unchanged, but various minor changes have been made inland, a few place-names added and these generally given Icelandic forms, though Danish forms and inflections find their way in too. The German and Latin texts are omitted, and various corrections made“ (islandskort.is).

The map is similar to the map of Eiriksson & Schoening, dated 1771 (1772).
It has a different but also decorative title cartouche in the top right corner, a compass rose in the upper center and three distance scales in the lower left quadrant. Mountains, glaciers, rivers, lakes, forests, fjords and settlements are depicted in detail. There are numerous place-names including the bishoprics are now characterized by churches, Skalholt with two towers and Holar with three towers. The volcano Hekla is drawn from a bird‘s eye perspective which is rather unusual. Europe‘s largest glacier Vatnajökull is depicted as a whole named „Klofajökull“, an old Icelandic name for the glacier. Today‘s capital, spelled „Reikiabiik“, also appears on the map.

The German version of Olavius‘ book „Ökonomische Reise durch Island“ of 1787 is my private book collection, including the map of Iceland.