was a Dutch mathematician and astronomer, active in Amsterdam. His first cartographic involvements were with Theunis Jacobsz during the 1640s. From 1650 he worked with Johannes Janssonius. He signed the charts and – together with his brother Gilles – issued the exceptional nautical atlas „Klaer-Lichtende Noort-Star ofte Zee Atlas“ in 1661 which contained 35 maps. In 1666 the plates were sold to Jan Jansson van Waesberge with whom van Loon then co-published the atlas which was expanded to 47 maps. Nothing more is known of van Loon’s personal life.

This extremely rare sea chart is from the 1666 edition of the „Zee-Atlas“.
The decorative title cartouche in the upper center depicts a fur trapper and a kayaker in their indigenous costumes and a local boat. The map illustrates the waters
of the North Atlantic, between Baffin Island („America“), Labrador („Nova Francia“) and Newfoundland „Terra Nova“) in the west and Ireland and the British Isles in the east, centered on Greenland and Iceland. At the upper right is an early appearance of the reference to the sighting of land on the East Coast of Greenland by Gael Hamkes in 1654, with a tentative coastline extending far across the map. In the lower left corner three distance scales are placed. The map s decorated by several compass roses, three of them with fleur-de-lis, rhumb lines and three fregates.

As it is a sea chart only settlements along the coastline of Iceland are named. The interior of the country is completely empty.

I acquired this map in spring 2021 from the well known  Barry Lawrence Ruderman Antique Maps Inc. The characterized the map and the atlas it is taken from as follows:
„Van Loon‘s sea atlas is amongst the rarest of all early Dutch sea atlases. The map is very rare on the market. RBH (stands for Rare Book Hub) locates only one single example in the past 50 years (Sothebys 1974) and no examples in AMPR (stands for Antique Map Price Register).“ 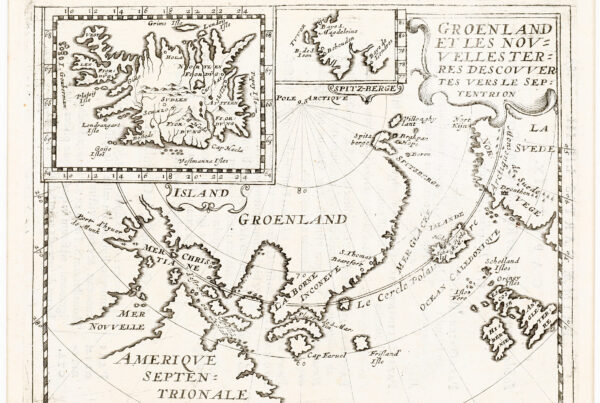