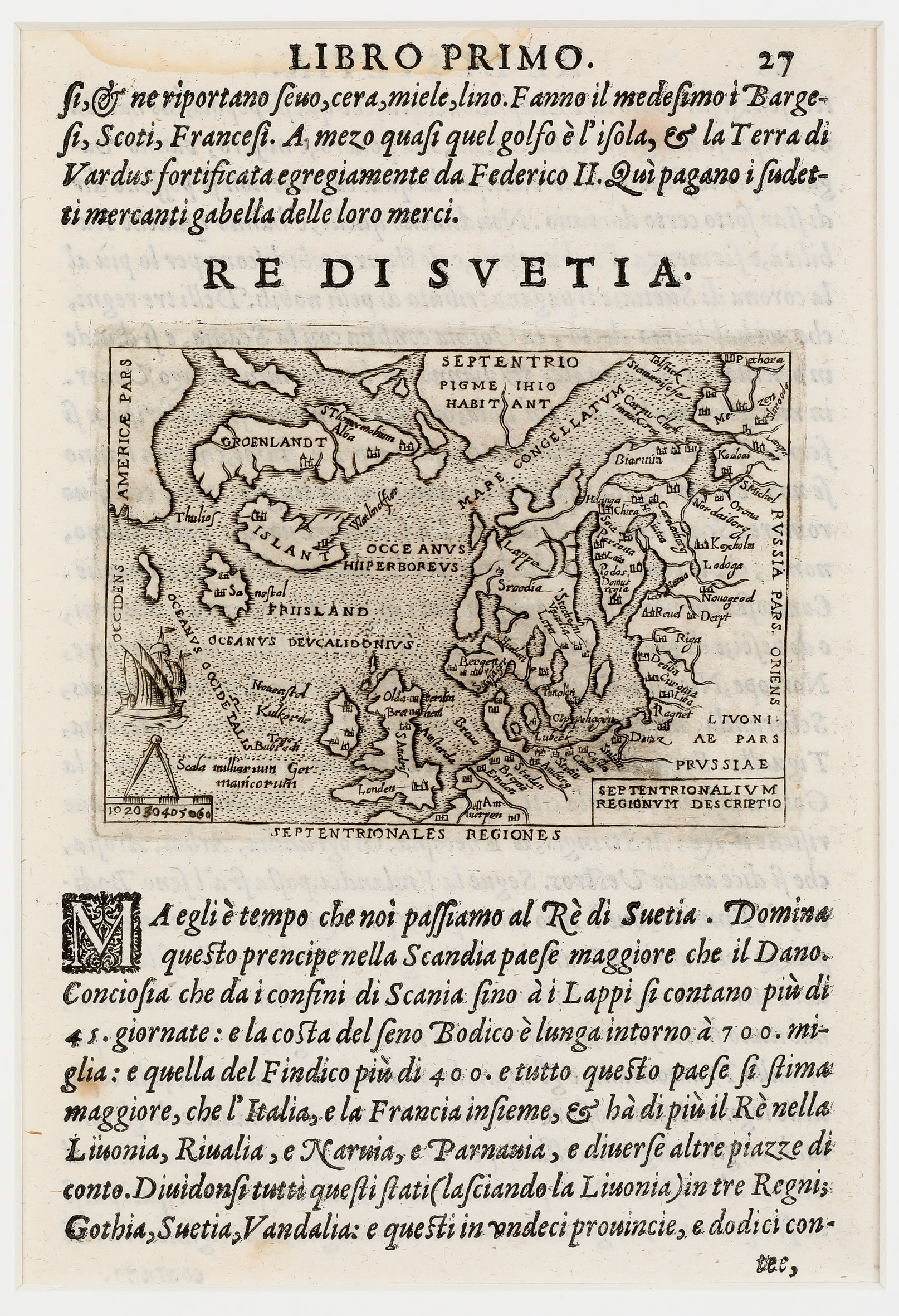 Abraham Ortelius was a Flemish/Dutch mapmaker and is perhaps the best known and most frequently collected of all sixteenth-century mapmakers. He was born in Antwerp which was then in the Habsburg Netherlands (now Belgium). The „Ortellius“family was originally from Augsburg/Germany, a Free Imperial City of the Holy Roman Empire. Abraham started his career as a map engraver. In 1547 he entered the Antwerp Guild of Saint Luke as „afsetter van Karten“ (illuminator of maps) and  became a businessi man dealing with books, prints and maps. He travelled a lot and at the Frankfurt book and print fair he met Gerardus Mercator in 1554. Due to his influence Ortelius seems to have been attracted towards the career of a scientific geographer. In 1564 Ortelius published his first map „Typus Orbis Terrarum“, an eight-leaved wall map of the world and in 1570 the Atlas „Theatrum Orbis Terrarum“ (Theatre of the World) with 53 maps. „The publication of this atlas marked an epoch in the history of cartography. It was the first uniformly sized, systematic collection of maps of the countries of the world based on contemporary knowledge and in that sense may be called the first modern atlas“ (Tooley, Maps and Mapmakers). In 1573 Ortelius started editing supplementary maps under the title „Addimentum Theatri Orbis Terrarum“. In 1575 he was appointed geographer to the King of Spain, Philipp II.
By the time of his death in 1598, a total of 25 editions were published including editions in Latin, Italian, German, French and Dutch; later editions were issued in Spanish and English by Ortelius‘ successors Galle and Vrients. Over the decades the atlas has tripled in size. The final edition was published in 1612.

Abraham Ortelius is often considered as the father of the Golden Age of the Dutch cartography. His death and burial in the St. Michael‘s Abbey in Antwerp were marked by public mourning. The inscription on his tombstone reads: „Quietis cultor sine lite, uxore , prole“ (Served quietly, without accusation, wife, and offspring).

Pietro Maria Marchetti, about whom only his period of activity is known (1565 – 1614)
is the publisher of „Il Theatro del Mondo Di Abraamo Ortelio“(Brescia 1598), a plagiarized version of Ortelius’/Galle‘s „Epitome“. The original plates of the pocket atlas were re-engraved in 1598 in Brescia where Italian titles were added. The atlas has more than hundred maps, including two world maps, four continent maps and also a map of the Northern Atlantic. Marchetti‘s publication was not immediately successful and more than 50 years passed until the second edition was issued  from Turin in 1655. A further six editions were re-issued, the last in 1724.

This sheet from the first edition of the rare atlas „Theatro“ contains a miniature map which is placed between the text in Italian language. The map has three titles:
„Re Di Svetia.“ is written above the map,  „Septentrionales Regiones“ underneath and „Septentrionalium Regionum Descriptio“ in a rectangle in the lower right corner.

The map shows the Northern Atlantic and the adjacent countries including the mythical island „Friisland“ and is decorated with a sailing ship and a distance scale with a circle. There is a big land depicted in the North which looks like a peninsula named „Septentrionales“ (North) but there is none in reality. Even more mysterious is the text „Pigme Ihio Habitant“ (Pygmies are living here).

„Islant“ is printed across the depiction of the country. Only two symbols for churches are to be seen without names but must likely they stand for the bishoprics Skalholt and Holar. Astonishingly more church symbols are to be seen in Greenland.