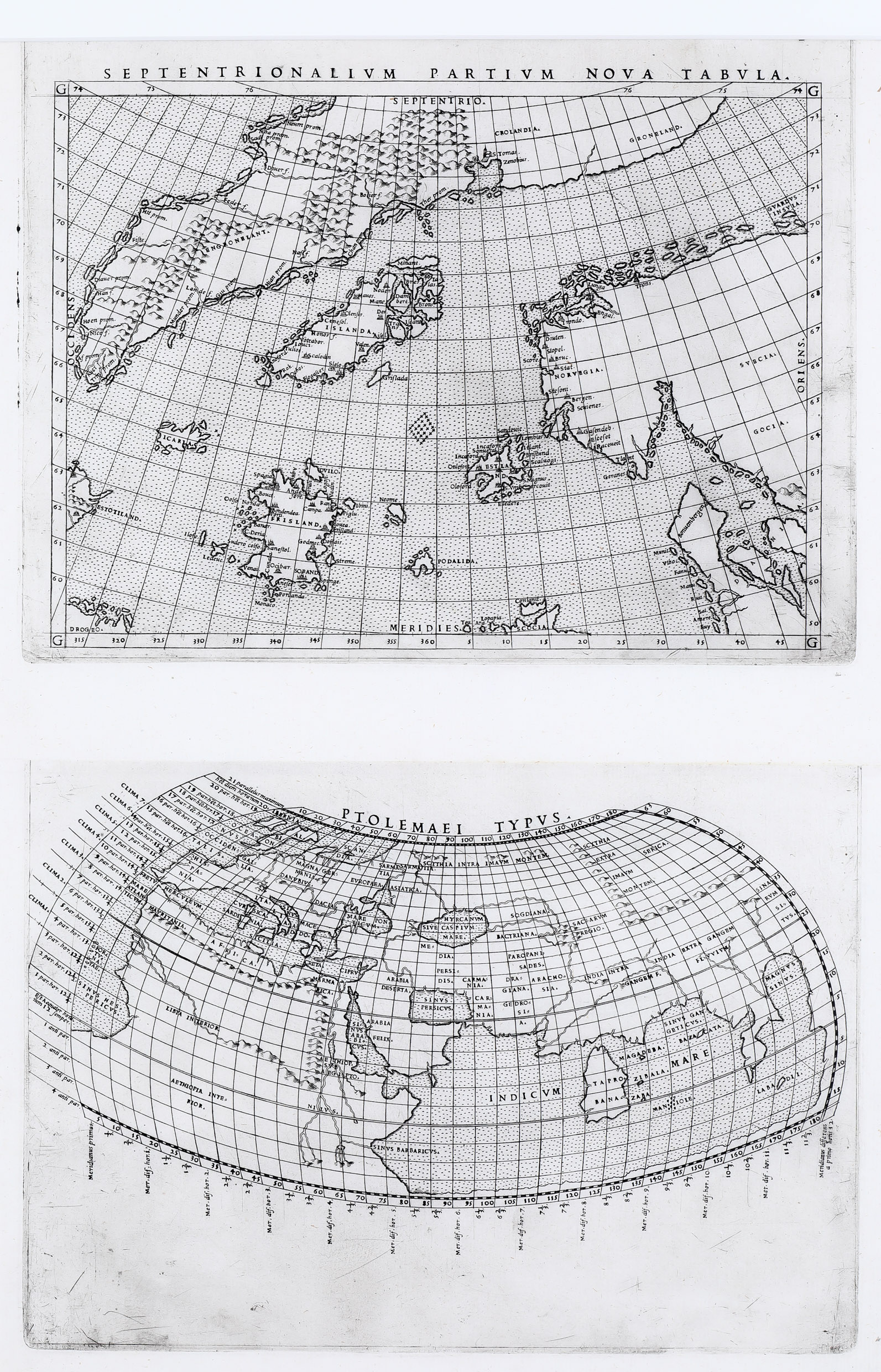 born in Viterbo, Tuscany was an  Italian mathematician and cartographer active in Venice during the early 16th century. He was not only a prominent writer on most varied subjects and a publisher  but also an alchemist, physician, writing pseudonymously as Alessio Piemontese. In his immensely popular book of alchemy „De Secreti Del Alessio Piemontese“ he described recipes for alchemical compounds, cosmetics, dyes, and medicines. It was reprinted for over two centuries and translated into numerous languages (French, Englush, German, Latin, Dutch, Spanish, Polish, Danish).

One of his most notable works was the curation of the Italian edition of Ptolemy‘s „Geographia“, published as „La Geografia di Claudio Tolomeo Alessandrino“ by Valgrisi in 1561 which appeared after Ruscelli’s death. It included newly engraved copperplates by Giulio and Livio Sanuti which were based generally on those compiled by Giacomo Gastaldi for the Venetian miniature atlas edition of 1548.

Ruscelli‘s and Gastaldi‘s maps, engraved in copper, marked a turning point in the history of cartography as afterwards, the majority of cartographic works used this medium. As copper is a harder material than wood it gave the engraver the ability to render more detail.

The Ruscelli map of 1561, regarded as an extraordinary map in the history of cartography, is based on the so-called „Zeno map“ which deserves special attention. This woodcut map from 1558 is titled „Carta da Navegar“ and was included in the book „Dei Commentari dei viaggi in Persia …e dello scoprimento dell‘isole Frislanda, Estland, Engrouelanda, Estotilanda, & Icaria, fatto sotto il polo artico, da due fratelli Zeni, M. Nicolo il K. e M. Antonio“. The Zeno map of which only a handful of copies is known shows the Northern Atlantic including Iceland near the center with Norway and Sweden to the east on this north-oriented map but there are also islands with strange names not to be found on modern maps. The book describes a pre-Colombian voyage to the new world in 1380 by the Venetians Nicolo and Antonio Zeno and depicts Iceland, Greenland and other North Atlantic lands. Nicolo Zeno (1515 – 1565), a descendant of these two brothers, had found letters in his his family holdings in which they described their adventures on their voyage to the new world in 1380 and published them in the „Commentari“ of 1558.

The Zeno map was reduced and re-engraved for Ruscelli‘s 1561 Italian edition of Ptolemy‘s „Geographia“. The main correction was the removal of the land bridge from Scandinavia to Greenland „because in wake of recent sailings by English seafarers to this area such a connection was obviuously wrong“ (islandskort.is). Furthermore the meridians are marked and place-names corrected or omitted. The Ruscelli map shows the western part of Scandinavia, Iceland, Greenland, the coastlines of Labrador and Newfoundland and many mythical islands not to be found on modern maps. The latter are depicted in considerable detail, for example 32 places and capes in „Frisland“.

There are two states of the Ruscelli map. The first plate was also used in the Latin edition of 1562 and both the Italian and the Latin editions of 1564. A new plate was introduced in 1574 titled „Septentrionalium Partium Nova Tabula“ which lasted until the final edition of 1599. The difference between the two states is purely typographical. In plate 1 DROGEO in the lower left and in the title SEPTENTRIONALIUM , in plate two DEOGEO and SEPTENIRIONALIUM  (I instead of the second T).

Obviously this map is from plate 1 but its uniqueness lies in the fact that two different maps have been engraved on the same plate; normally they were separated after the printing process for binding in an atlas. This is one of the very few complete sheets.
(Ginsberg  knows only one example which in the Franco Novacco Collection).
The sister map is Ptolemy‘s World Map „Ptolemaei Typus“.

The Zeno map and its descendant, the  Ruscelli map are one of the most successful cartographic hoaxes.

In his „Commentari“ Nicolo Zeno (1515 – 1565) published what was supposed to be the account of a voyage by his ancestors, Nicolo and Antonio Zeno, across the Northern Atlantic in 1380. He had found letters in the family holdings which described
their sea route and their fantastic adventures on their travels in more than a decade.
The brothers had sailed to „Frisland“ where they spent many years with King Zichmi,
to the islands of „Icaria“, „Estland“ and „Podalida“ and to „Engronelant“ (Greenland) where they visited a monastery with hot springs near an active volcano. They finally reached „Estotiland“ (Labrador) with  a Latin-speaking population and „Drogeo“ with lots of beasts and cannibals.

Many of these mythical islands were depicted on maps for centuries, mainly because Gerard Mercator accepted the voyage of the Zeno brothers as authentic and adopted much of it in his famous large 1569 World map and his 1595 map of the North Pole.
Abraham Ortelius used the Ruscelli map as a prototype for his map of the North Atlantic. Frisland appeared on maps as late as the 1657 world map by Nicolaas Visscher.

In the 19th century the Zeno account and map came under scrutiny. Most famously, Frederick W. Lucas questioned the validity of the voyage in „The Annals of the Voyages of the Brothers Nicolo and Antonio Zeno in the North Atlantic“ (1898). He accused Nicolo the younger of making the map up, using islands found on other maps and simply scattering them across the North Atlantic, and Nicolo on trying a Venetian claim to the New World that superseded the Genoan Christopher Columbus voyage.

Whatever the truth, the Ruscelli map with the „Zeno islands“ is an outstanding example of the fancy of early maps and travel literature.