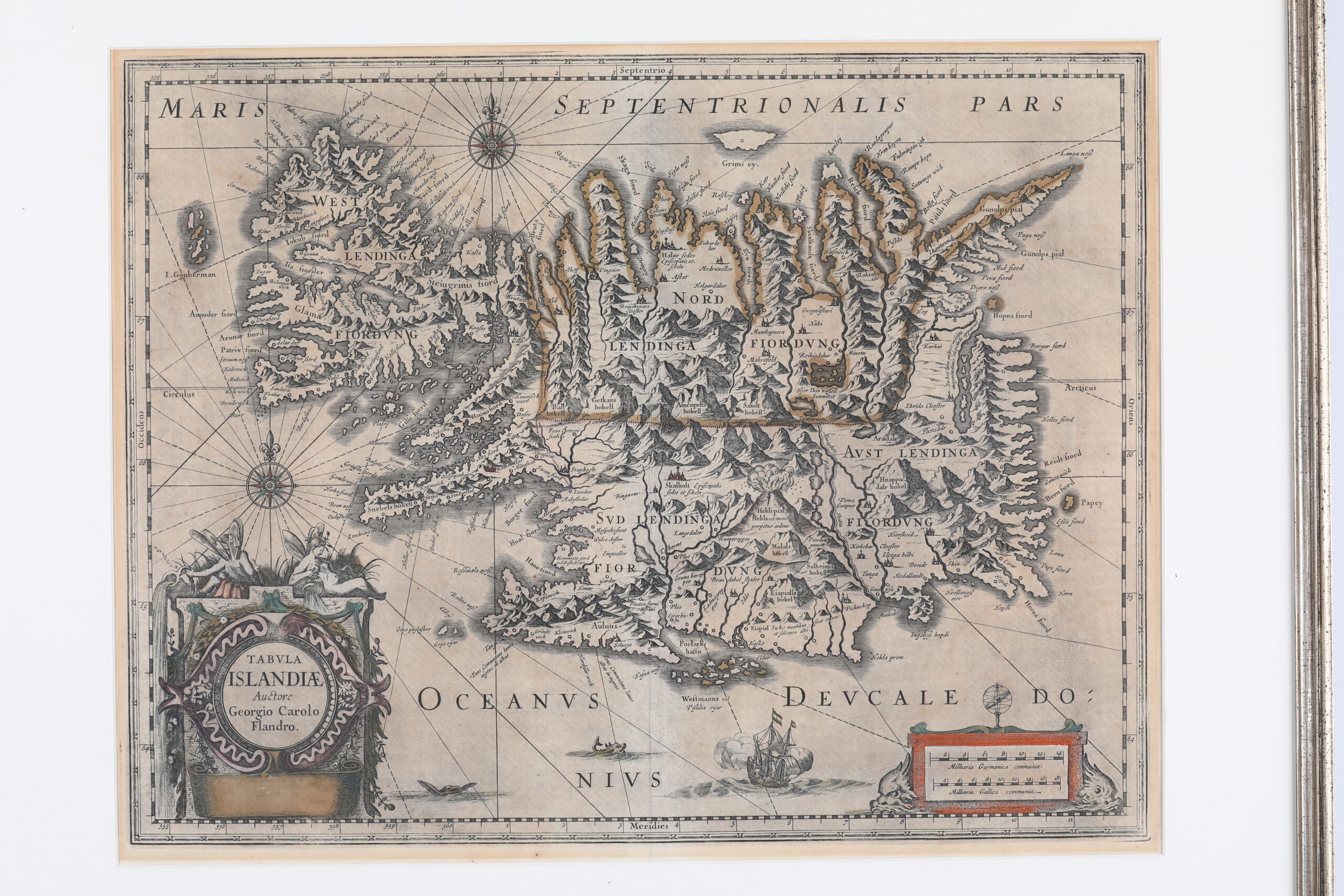 Joris Carolus, apparently a native of Enkhuizen, lost a leg in the „Siege of Ostend“ at the beginning of the 17th century. After that he turned to the art of navigation and became a „Stierman“ (pilot) for the whaling company „Noordsche Compagnie“. He claimed to have reached 83 degrees N and definitely reached the islands of Jan Mayen and Spitsbergen, the Davis Strait region and Baffin Bay. He even spent some time in Iceland. After his retirement he settled in Amsterdam as teacher of navigation and became a cartographer.

Henricus Hondius, born in Amsterdam, was the son of the famous cartographer Jodocus Hondius. In 1621 Henricus opened up his own company in his hometown. The the first time his name was mentioned in an atlas, was in 1623 when he published the fifth edition of the Mercator-Hondius Atlas. After 1628 Henricus partnered with Johannes Janssonius and together they continued the business until his death in 1651.

Johannes Janssonius (in English also Jan Jansson), born in Arnhem, was a Dutch cartographer and publisher who lived and worked in Amsterdam. In 1612 he married Elisabeth de Hondt, the daughter of Jodocus Hondius the Elder. He produced his first maps in 1623 and founded a bookshop in Frankfurt, later in seven other cities. In the 1630s Janssonius formed a partnership with his brother-in-law Henricus Hondius and together they published atlases as „Mercator-Hondius-Janssonius“. After Janssonius‘ death the publishing company was continued by his son-in-law Johannes van Waesbergen who combined the two surnames. „Janssonius Johannes van Waesbergen published a new rendering of Cloppenburg‘s „Atlas Minor“ under the title „Nieuwe en beknopte uytbeeldinge en Vertooninge der gantscher Aerdbodem“ in Amsterdam in 1673.

This stunning map of Iceland taken from Henricus Hondius‘ „Nouveau Theatre du Monde ou Nouvel Atlas comprenant les Tables et Descriptions de toutes les Regions de la Terre“ in 1641. The map is slightly bigger than the famous maps of Abraham Ortelius 1590 and Gerardus Mercator 1595.
„On the map the length of Iceland is much the same as on Mercator‘s map, but the breadth is rather less, so that the proportion is nearer to the true one. The map shows the influence on both versions of bishop Gudbrandur‘s map. The coastline resembles more Ortelius, but when it comes to place the map follows Mercator in selection and spelling. In spite of many errors, some of them serious, the map us a step in the right direction“(islandskort.is).

The ornamental title cartouche features two winged sprites, an important symbol of the Icelandic and Norse mythology. The title is nearly the same as in the Carolus-Hondius version of 1628/29 and the Carolus-Blaeu version of 1630. It includes the name „Auctore Giorgo Carolo Flando“ and the place-name „Amstelodami“ but the names of the publisher are no longer „Judocus Hondius“ and Guilhelmus Bleuw“. Their names are deleted and the scroll is left blank. Furthermore the map is richly embellished with a distance scale cartouche, compass roses, rhumb lines, a sailing ship, two sea monsters and a breathtaking scene of an erupting vulcano with the text: „Hekla mons vel perpetuo ardens“ which suggests that the volcano was constantly active at the time. The island‘s topography with mountain chains, rivers, lakes, glaciers and settlements is beautifully depicted. There are many place-names including the bishoprics Skalholt and Holar („Halar“), each with text: „Episcopalis sedes et. schola“.

This map is slightly different from both, the Carolus-Hondius map of 1628/29 and the Carolus-Blaeu map of 1630. Here the name „Grims ey“ appears underneath the depiction of the island while on the other maps the name is north of it.

Compared with the Ortelius and Mercator maps of Iceland improvements are hard to be discovered but there are some errors, for example the „I. Gouberman“ near to the Westfjords actually not exists.