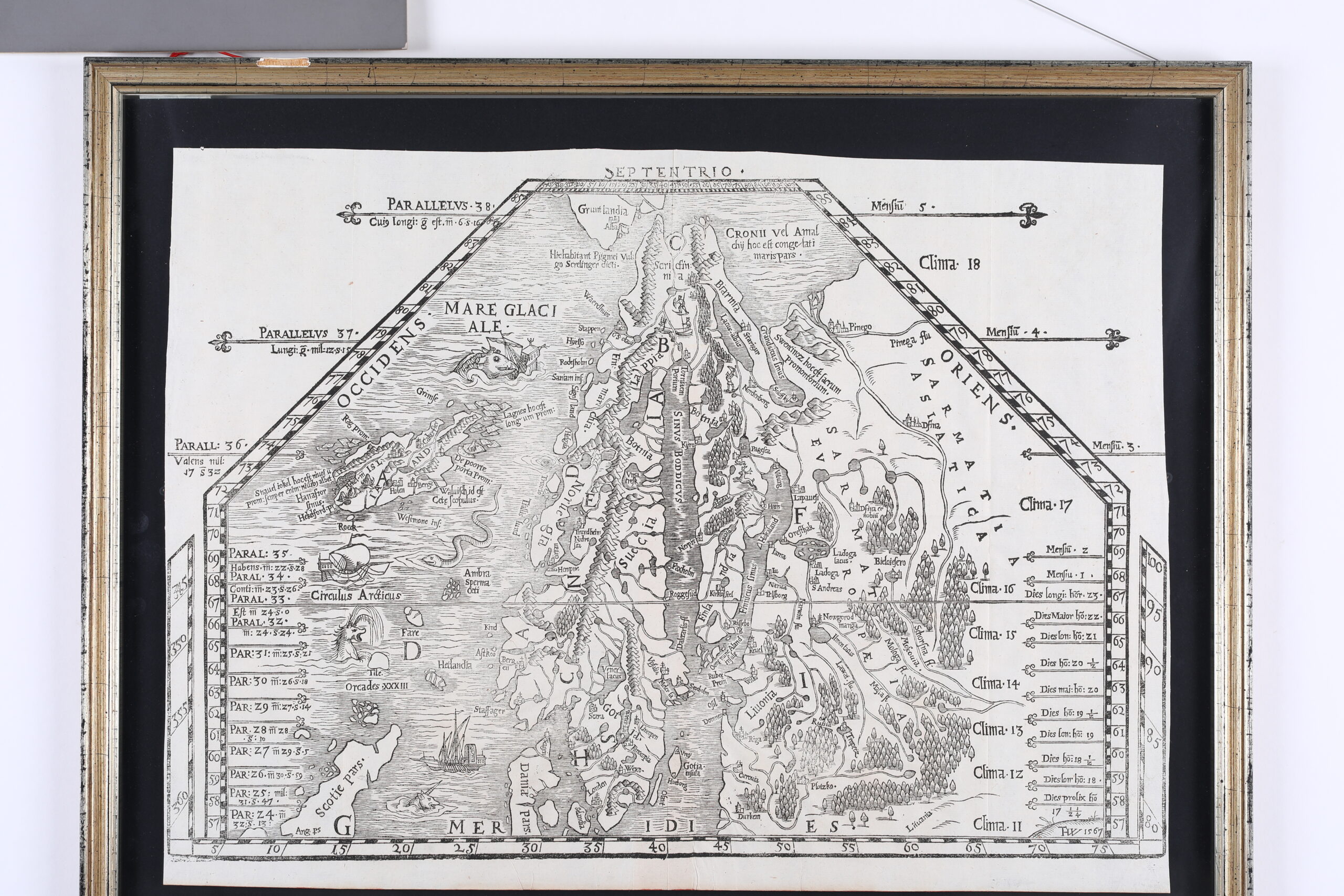 was a Swedish catholic priest, geographer and carthographer. His original name was Olof Mansson (meaning son of Mansson). Magnus is a latinized version of his patronymic second name, and not the literal personal epithet meaning „great“.
He was born in Linköping, attended school there and in 1510 he went abroad to prepare himself for a career in the Catholic Church in Sweden. Among other places he studied at the University of Rostock, Germany. After his return to Sweden, in 1518, he became deputy of Angelo Arcimboldi, the papal seller of indulgencies in Northern Germany and in Scandinavia. In that capacity he travelled around „Norrland“ and even reached Nidaros (Trondheim), the Lofoten and southern Finnmark. The impressions he collected on these voyages should prove as very valuable along his career.

When the Lutheran Reformation erupted in Sweden, Olaus Magnus, together with his elder brother, Archbishop Johannes Magnus, remained loyal to the Catholic faith and they went into exile. As refugees they spent several years in Danzig. In 1537 they settled in Rome. Olaus acted as his brother‘s secretary and worked on his book „Carta Marina et Descriptio septentrionalium terrarum ac mirabilium  rerum in eis contentarum, diligentissime elaborata Anno Domini 1539 Veneciis liberalitate Reverendissimi Domini Ieronimi Quirini“ (A Marine map and Description of the Northern Lands and of their Marvels, most carefully drawn up at Venice in the year 1539 through the generous assistance of the Most Honourable Lord and Patriarch Hieronymo Quirino). It included a map of Northern Europe which was rediscovered by Oscar Brenner in the Munich state library and is now referred to as „Carta Marina“. It consists of 9 parts, and is remarkably large: 170 cm wide and 125 cm tall.

After the death of his brother in 1544, Olaus was appointed Archbishop of Uppsala but as a consequence of the Swedish Reformation he was not able to enter his territory and stayed in Rome. Here, in 1555 Olaus published his most important book „Historia de gentibus septentrionalibus“ (A Description of the Northern Peoples) which was intended to become the commentary book to the „Carta Marina“ but in fact it dealt with the nature, the climate, agriculture, mining, wild animals and last but not least the life of people in Scandinavia. This text on dark winters, violent currents and beast of the sea amazed the rest of Europe. The book was translated into Italian (1565), German (1567), English (1658) and Dutch 1665), and not until 1909 into Swedish. The „Carta Marina“
was indispensable for generations of later cartographers.

The two scientific works he published during his long exile gave Olaus Magnus a pioneering position in the geographic research of Scandinavia.
He never returned to Sweden and after his death, as a prominent churchman he was buried in St. Peter’s in Rome.

This very rare map is either from the German translation of Olaus Magnus’ „Historia de gentibus septentrionalibus“ (Historien der Mittnächtigen Länder) or a reprint (literally) of the first edition of 1555 but with some amendments in „Historia Olai Magni Gothi archiespiscopi Upsalensis. De gentium septentrionalium variis conditioninus statibusque, et de morum …“, both published in Basel in 1567.

The map is impressive not at least because of its unusual trapeze-shaped upper part which borrows from the Ptolomaic tradition but also attempts to allow for the diminishing latitude northwards. Scandinavia is shown in a narrow and long-drawn shape and also Iceland, Scotland and Greenland („Gruntlandia“) in the far north.
Scandinavia is positioned in a scale of diminishing latitudes northwards but eg Iceland is far north of the „Circulus Arcticus“ (Arctic Circle) which in reality is 66,57 degrees N.

The map is decorated by three sea monsters along the west coast of Norway, one big is eating a sailing vessel, another is to be seen near a small island „Tile“. There are also two other boats to be seen, one sailing vessel is going to be attacked by a  sea serpent, the other is acting as a rowing boat.

Near the North Pole there is a note: „Hic habitant Pigmei Vulgo Screlinger dicti.“ (Here live Pygmies commonly called Screlinger); the latter was used for the natives of Greenlands at that time. Northeast of the Faroe Islands („Faro“)  „Ambra sperma ceti.“ is written which means white sperm whales. The ice on „Carta Marina“ is, with a polar bear sitting on an ice floe. The Arctic Circle is delineated completely wrong (close to the north of the Faroe Islands).

In the lower right corner of the map appears „TW 1567“, the initials of Thomas Weber, the woodcutter of the map and the year the map was engraved.

The information on Iceland is rather poor. Mountain ranges are dominant of which three are depicted as volcanoes, overwritten „Hekel • m“ which surely mans Hekla. There are four churches,  two have names: „Holen“ (Holar) and „Berge“. Another one is located near „Cakerfjer“ and the most prominent church stands alone unnamed between „Isl“ and „and“. Langanes in the northeast corner is hightlighted for the first time. The only glacier named is „Snauel jokel“ (Snaefellsjökull).