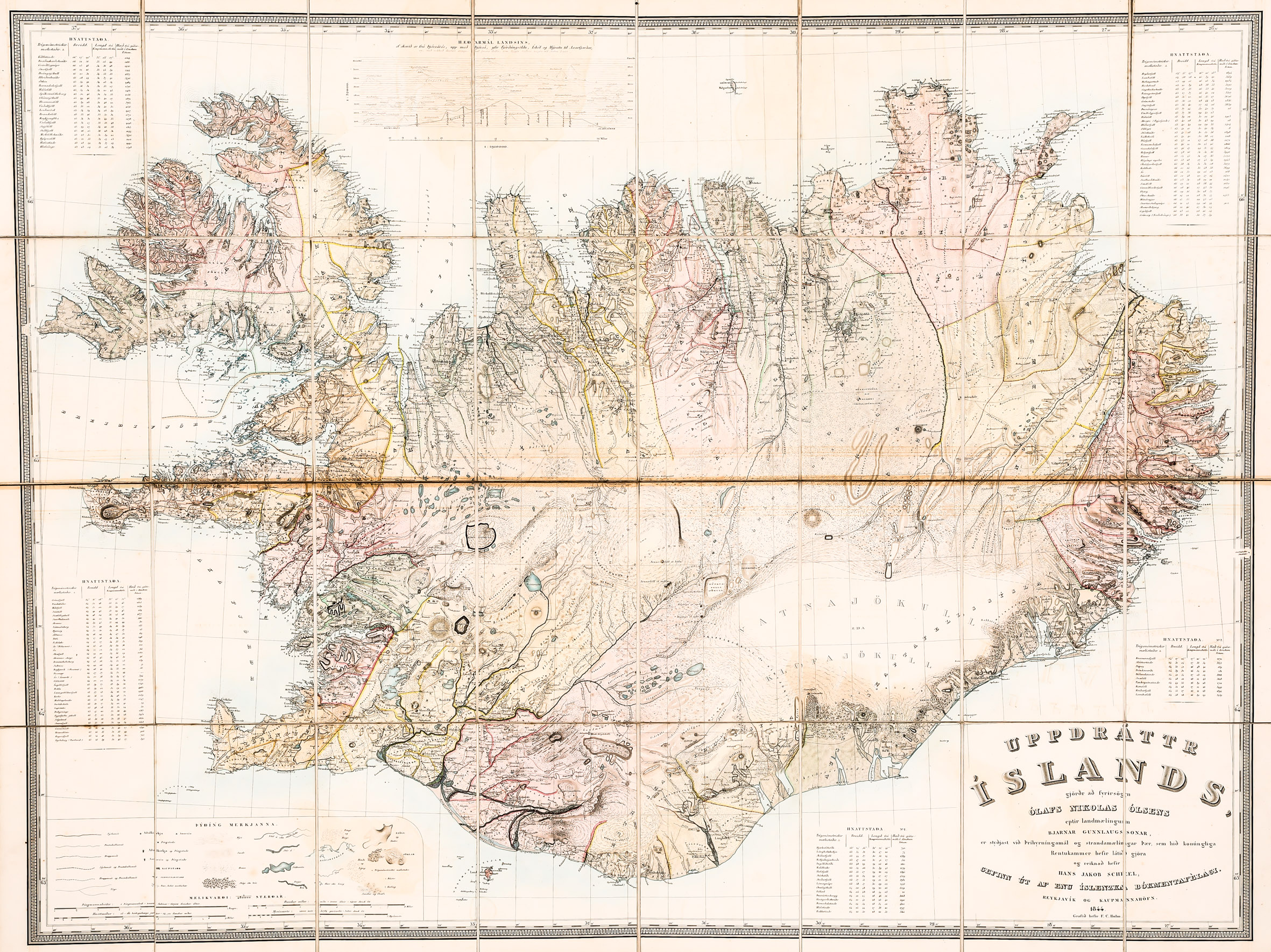 Björn Gunnlaugsson was an Icelandic mathematician and cartographer. Born into a poor family in Tannstadir, a remote farm on the Hrurafjördur in north-western Iceland, he went to a local school. The priests recognized his intelligence and sent him to a grammar school in Reykjavik where he passed his exam in 1808, obtaining a recommendation of the bishop for studying at the University of Copenhagen. Because of the Napoleonic wars Björn was not able to travel and to enroll until 1817. He studied mathematics and theology and won the prestigious Gold Medal for Mathematics twice. There are rumours that the academic community was shocked that an obscure Icelander received such an award.
While Björn could have made a successful career in Copenhagen he decided to return to Iceland though jobs outside the fishing and farming sector that paid a live wage were few. Therefore in 1822, he accepted the position as teacher for Danish language, mathematics and history at the grammar school in Bessastadir, not far from Reykjavik.
As the only studied mathematician Björn tried to take the discipline which covered barely more than the four basic operations at the time to a higher level but failed ultimately because he overstrained his pupils with arcade mathematics. He got bored with his posting and as a lover of the Icelandic landscape he began to focus on the topographical mapping of the island as he knew about his countrymen’s frustration about the lack of comprehensive maps.

In 1829 Björn sent a letter to the prefect in which he proposed to undertake a land survey of Iceland and urged the Danish Government to hand over all the instruments that had been used by the Danish Navy for their earlier coastal surveys of Iceland.
As there was no response he approached the Icelandic Literary Society („Hid islenska bokmennafelag“) which had been founded in response to Copenhagen‘s neglect of the island and would later become a nucleus for separatist sentiment. The Literary Society was highly impressed by Björn‘s survey project and with great difficulties he managed to secure funding for the first phase. The financial position was eased when the Danish Government made him a grant in 1636 which he received until the end of his surveying. After he had obtained the necessary instruments, finally, Björn surveyed the country from 1831 to 1843. His hand-drawn maps were sent to Copenhagen for preparing the publication.

Olaf Nikolas Olsen was given the task of making a map out of Björn’s work. He was a Danish cartographer and officer of the Army of Denmark. He taught cartography at the Royal Cadet School and also in the new Army Academy. In the General Staff he became a member in 1836 and in 1842 head of the topographic  department (in the rank of a Major, later Colonel). He carefully compiled Björn’s regional manuscript maps into an accurate general map of Iceland.

For his survey work Björn Gunnlaugsson received the Danish „Order of the Dannebrog“ in 1846 and the French „Legion d‘Honneur“ in 1859. The map was also exhibited at the „World‘s Fair“ in Paris in 1878.

For the next half century the Gunnlaugsson/Olsen type of map has set the standard for the mapping of Iceland, until Thorvaldur Thoroddsen published his „Kort over Island“ in 1900.

The title cartouche of this extremely important map has a long Icelandic text in the lower right corner The English translation is:
A Map of Iceland
Made under the instructions of
Olaf Nicolas Olsen
By the Surveying of
Bjarni Gunnlaugsson
Using triangulations and coastal charts those who the Royal Renntkammer (Danish offices) have had done
and calculated by Hans Jakob Scheel
Published by the Icelandic Literary Society
Reykjavik and Köbenhagen 1944
Engraved by F. C. Holm

There are tables with the heading „Hnattstada“ at the top left, top right and at the bottom next to the title cartouche which are used to describe the geographical position of Iceland on the planet. In the top middle „Haedarmal landsins“ indicates the height of the country e.g. mountains from sea level. At the bottom left „Pyding Merkjanna“ explains the signs/symbols.

This large map covers virtually the entire inhabited area and quite a good part of the uninhabited. The latter he did not travel extensively because of the costs. „But his principal concern was to map the inhabited regions, leaving a complete map of the rest of the  country until a better opportunity“ (islandskort.is). At least the depiction of the central highlands gives for the first time a reasonable picture of the lava fields, the rivers and of course the glaciers. „In spite of some errors, Björn Gudlaugsson‘s survey and map are a great scientific achievement unique of its kind, carried out with extremely limited resources both in finances and equipment“ (islandskort.is).

For more than three decades I have searched for this map – without any result.

All of a sudden in autumn 2020 it was offered to me by „The Map House“ in London, the world’s oldest and largest antiquarian map gallery (according to the British Antique Dealer‘s Association), where my wife and I had bought some of our first maps of Iceland. Director Peter Stuchlik wrote: „It is a beautiful map and the first example we have had for sale in about thirty years“. Though the price of this map was high and one of the highest I ever paid for single map I did not waste a thought. This very scarce map marks a new era in the cartography of Iceland and with this extraordinary piece the „Schulte Collection“ finds a logical conclusion. 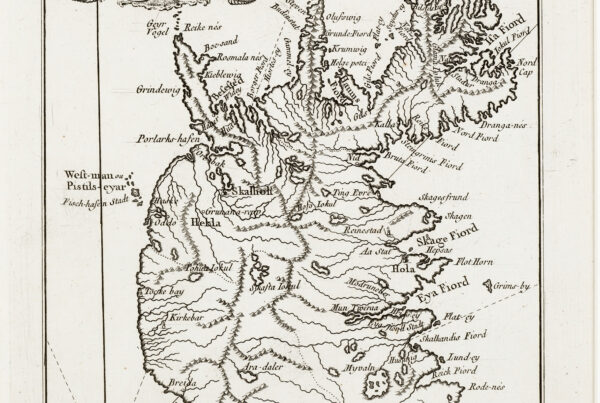 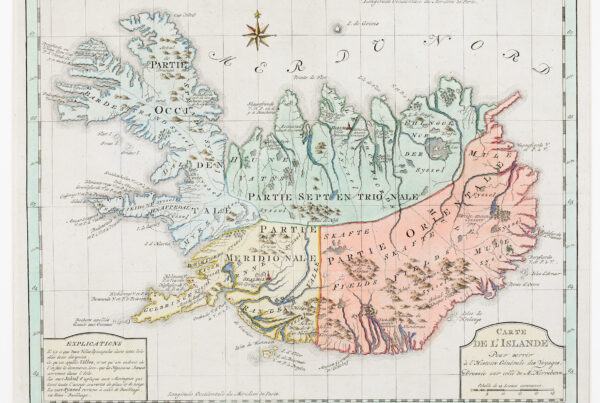