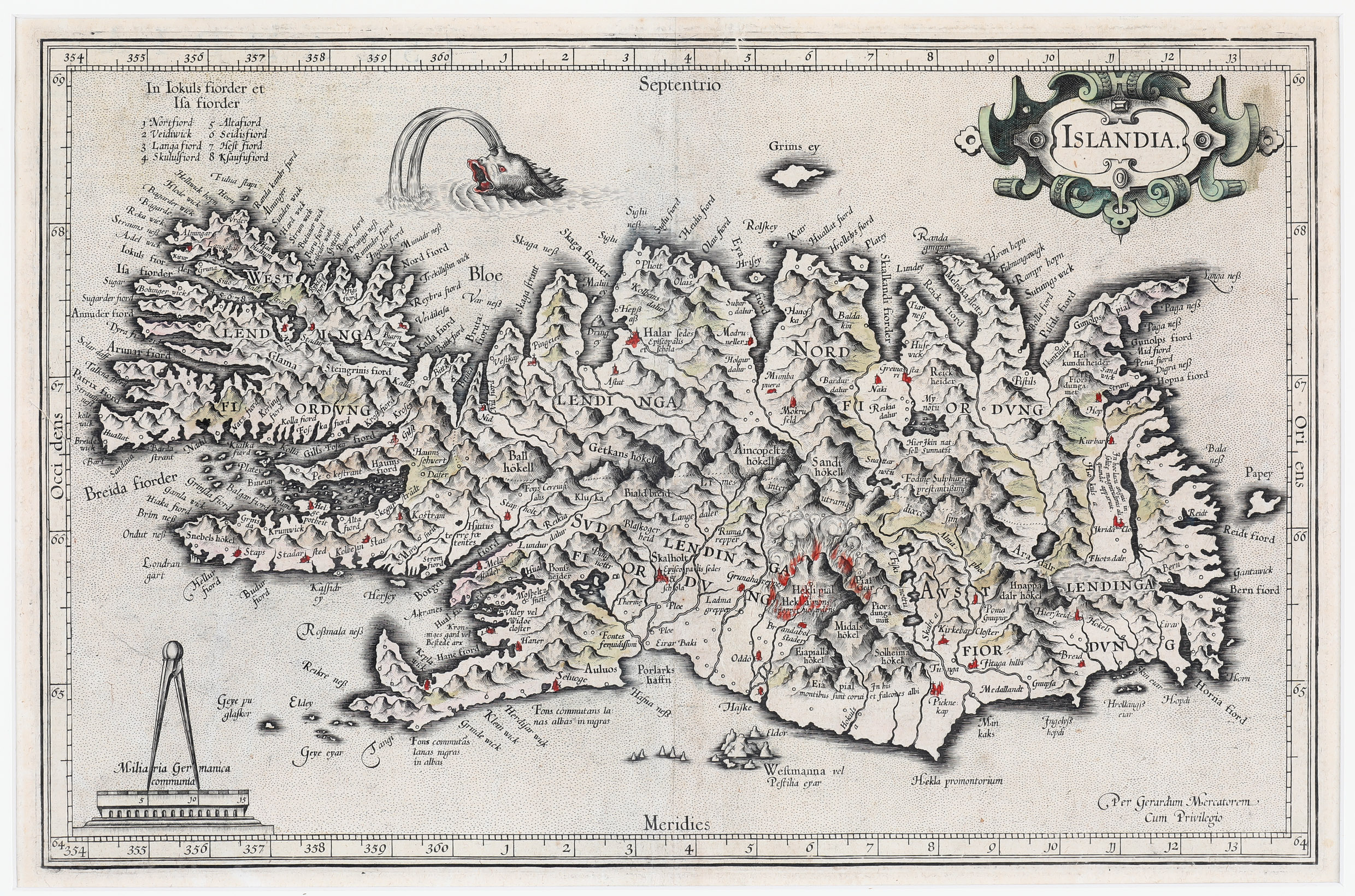 is a pioneer of cartography and one of the most famous cartographers of all time.
He was born as Gerard de Cremere in Rupelmonde (near Antwerp), educated at a school run by the „Brothers of the Common Life“ and enrolled in philosophy at the Catholic University in Leuven. By this time he latinized his name to Gerardus Mercator.After his graduation in 1532, Mercator studied unter the guidance of two prominent men: Gemma Frisius, a physician, mathematician and instrument maker and Gaspar van der Heyden, a goldsmith and engraver. Together these men produced globes and scientific instruments, allowing Mercator to hone his skills.

Mercator was born into a Catholic family at a time when Martin Luther‘s Protestantism was gaining ground. He was clearly sympathetic but never declared himself as a Lutheran. But he was accused of heresy by Catholic authorities; after four months in prison, thanks to intervention of the University of Leuven, he was released unscathed. This period of persecution is probably the major factor for the decision he made in 1552, to move from Catholic Leuven to the more tolerant and peaceful town of Duisburg in Holy Roman Empire (now Germany), untroubled by political and religious unrest, which was the perfect place for flowering his talent. In 1560 he was appointed the official cosmographer to the court of Duke Wilhelm of Jülich-Cleve-Berge and became a lecturer at the Grammar School of the new University of Duisburg (now named „Gerhard-Mercator-Unversität Duisburg-Essen“).

Unlike many other great scholars of the age he travelled little and his knowledge of geography came from his library of over one thousand books and maps, from his visitors and from his vast correspondence (in six languages) with other scholars, statesmen, travellers, merchants and seamen.

Mercator was not only renowned for geography and cartography but he also showed interests in theology, philosophy, history, mathematics and geomagnetism which predestined him for his main project:  the complete description of the Creation, the Heavens, Earth and Sea and a world history. Shortly after the publication of his map book (not yet called „Atlas“) Part two in 1589 he had a stroke which brought an end to Mercator‘s enormous productivity. The great man passed away on 2 December 1594 and was buried in the church St. Salvatore in Duisburg where a memorial was erected about 50 years after his death lauding him as „the foremost best mathematician of his time who crafted artistic and accurate globes …“ In addition, on the base of the memorial, there is an epigram: „To the reader: whereever you are, your fear that this small clod of earth lies heavily on buried Mercator are groundless; the whole Earth is no burden for a man who had the whole weight of her lands  loaded on his shoulders and carried her as an Atlas“.

Mercator‘s most important contribution to cartography was the creation and popularization of a projection which now bears his name. On Mercator‘s maps all parallels and meridians are drawn at right angles to each other, with the distance between the parallels extending towards the poles. This projection allowed for accurate latitude and longitude calculation as well as navigational routes to be drawn using straight lines, a huge advantage for sailors because now, they were able to pilot courses without constant recourse to adjusting compass readings.

Mercator‘s other enduring contribution to cartography is the term „Atlas“ which was first used to describe his collection of maps gathered in one volume. The famous „Mercator Atlas“ was published in 1595, one year after his death, by his son Rumold who had taken over his fathers stock. He added 34 new maps, including „Islandia“,
for the final part („Pars Altera“) of the map book which appeared in 1595. It constitutes an essential contribution to what was later called the „Mercator Atlas“. The collection was named „Atlas sive cosmographicae Meditationes de Fabrica Mundi et Fabricati Figura“. With this atlas Rumold who passed away already in 1599 and his sons attempted to duplicate the tremendous success of Ortelius‘ „Theatrum“.

In 1604 the plates of the „Atlas“ were sold to Jodocus Hondius (1563 – 1612), a Flemish-Dutch engraver. In 1606 the first „Hondius edition“ of the „Mercator Atlas“ appeared. The title page now included a picture of Mercator and Hondius together although they had never met. The „Mercator-Hondius Atlas“ became an enormous success. From then, Jodocus Hondius, later his sons Henricus (1587 – 1638) and Jodocus Jr. (1593 – 1629) and finally Johannes Janssonius (1588 – 1664), son-in-law of Jodocus Hondius the Elder, carried on the publishing house. In the period between 1606 and 1641 many enlarged editions in various languages have been published.

The geography of this famous Mercator map of Iceland derives – as the Ortelius map -from a map of Gudbrandur Thorlaksson, Bishop of Holar and author of the first complete Icelandic translation of the Bible („Gudbrandsbiblia“). As Mercator’s „Islandia“ was issued five years later than Ortelius‘ „Islandia“  the question is whether Mercator‘s map is based on the map of Ortelius or directly from the same source, Gudbrandur‘s map which no longer exists.

„There is absolutely no doubt that this map is made from the same exemplar as the map by Ortelius, or one closely resembling it. The correspondences between both versions seem all to point in the same direction, namely that the limitations derive to a considerable extent from bishop Gudbrandur‘s original“. And further: „We have  no means of knowing how bishop Gudbrandur‘s map came into the hands of Mercator. He and Ortelius had been life-long friends, and there was probably some cooperation between them“ (islandskort.is). More information on the speculations about the origin of both maps is to be found in islandskort.is

A comparison of the geographical positioning and the shape of Iceland leads to the result that the figures of latitude and longitude are not exactly the same on the maps of Ortelius and Mercator. The latter „puts the country more to the north than Ortelius and thus increases the error“ (islandskort.is). In both maps the country is more angular than the line of the country justifies and the coasts are drawn too straight. The uninhabited parts of the country are largely ignored and compressed so that the distances between the north and the south of the country are far too short.

The Mercator map has considerably more names, almost 300 in all. „Some of them must certainly derive from the bishop but others are of more doubtful nature and have no other function than to increase the total number… As far as place names are concerned Mercator seems to have departed further from the original than Ortelius“ islandskort.is), e.g. for Thingvellir, the famous site of the Althing, Ortelius uses „Finguollur“ and Mercator „Bingnottr“.

Mercator’s map has a decorative strapwork title cartouche in the upper right corner supplemented by the information on the author: „Per Gerardum Mercatorem cum Privilegio“ in lower right corner and a distance scale topped with dividers in the lower left quadrant. In the upper left there is a headline „In Iokuls fiorder et Isa fiorder“ with numbers and fjord names and underneath which explain the position of fjords in the northwestern part of Iceland. In the ocean south of Reykjanes peninsula two short notes  are to be found which mean: Springs change the colour of wool (from black to white on the left, from white to black on the right), as in Ortelius‘ map.

What particularly catches  the eye is the fire spewing Hekla. The text says: „Hekli pial Hekla mons perpetuo ardens“ (Hekla perpetually burning“). Amongst the place-names are the bishoprics Skalholt („Episcopalis Sedes et Schola“) and „Halar“(Holar) („Sedes episcopalis et schola“). Some of the glaciers („hökel“) on the highlands are marked but surprisingly Vatnajökull, the largest glacier in Europe, is missing while  the glacier „Hnannadalr hökel“ is depicted which could stand for „Hvannadalshnukur“, the summit crater of Oreafajökull, the southern extremity of Vatnajökull.

Mercator‘s map is less decorative because polar bears, driftwood, ice and all  the sea monsters, except one are missing.